All restaurants attract tribes, and here at Les 2 Garçons a very particular tribe has come out to play. We can reach for obtuse euphemisms if we like, mangle the language in search of originality, but “the chattering middle classes” pretty much covers it. Perhaps they have a subscription to the LRB that they worry they don’t read enough of, or a membership to the Royal Academy that they fear they don’t use as regularly as they should.

They adore BBC Radio 4, apart from the 6.30pm comedy shows, which they never laugh at. They love good coffee and well-made sourdough. They despair of the government, hope Keir Starmer is the real thing and fantasise about going on holiday to France. Frankly, they’d go there more regularly if such behaviour didn’t make them fear that, with age, had come entrenched habits. They might well be down to only one of their own hips. They are this newspaper’s readers. Oh, sod it. They are me.

This tiny French bistro, tucked in at the bottom of north London’s Crouch Hill, has just 22 seats. There are bare floorboards, net curtains halfway up the windows and a lot of blackboards for the scribbling up of beguiling specials. It could have been designed with both them and me in mind. It is a perfect expression of our love for a certain kind of classic, unfussy but luscious French cookery, lubricated by good butter, powered by chopped garlic and fistfuls of fresh green herbs. Every menu description conjures up an image of how happy you will be eating it. Not a single one lets you down. The dishes here could have been served at any time over the previous nine decades. They just might not always have been quite so good.

It’s what you would expect of these two particular garçons. Chef Robert Reid has classical French chops forged in the greatest of French kitchens: he cooked at Roger Verge’s Moulins de Mougins on the Riviera, at au Crocodile in Strasbourg and Joel Robuchon’s Jamin in Paris, before returning to London. There, he became head chef at Marco Pierre White’s Oak Room when it held three Michelin stars. At the Oak Room he met Jean-Christophe Slowik, a front-of-house veteran who had worked at Le Manoir and at Harvey’s, Pierre-White’s original launch pad, before opening his own neighbourhood restaurant, L’Absinthe, in Primrose Hill. These careers are akin to those of veteran guitarists and bassists who, between them, have played with Yes and Soft Machine, Pink Floyd, Jethro Tull, King Crimson and Genesis: less monsters of rock than monsters of stock. 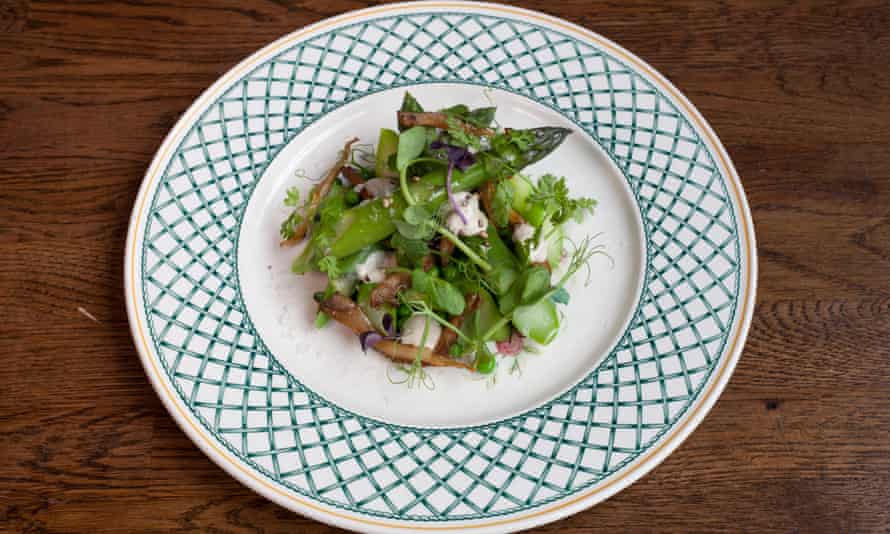 This evening the room is full, even though it is only a little after six. The diners seem delighted to be the first sitting, certain in the knowledge they can do the full restaurant thing and still be back home by 8.30pm, digesting dinner while slumped in front of BBC4. Slowik, customary scarf tied at his neck, works the tables with almost comic Gallic charm, depositing glasses of kir with just a blush of cassis, and talking up the blackboard specials. Reid is also out here, playing rush goalie, blue and white striped apron over his whites, Marco style. He takes orders and delivers dishes from the kitchen at the back, where there are a couple of other cooks. It is a tight operation, as it needs to be with so few tables. It turns out that other newspapers also have restaurant critics. Who knew? One of them had just stumbled upon the place. I ask Slowik if that’s why it’s so full so early. No, he says. It’s been like this since they opened in the autumn last year. It just fills up a little quicker now.

So what did we eat? Oh, you know. All the good stuff. Snails are served out of the shell, in a fearsomely hot dimpled cast-iron tray, with garlic butter made with fields of fresh herbs, more torn than chopped. We are given a brown paper bag of sliced warm baguette that quickly becomes a vehicle for all the herby butter. From the specials board comes asparagus in its prime, with a salad of freshly podded peas in a dressing of lemon and truffle. Do I need tell you there are also duck rillettes and steak tartare and an onion soup gratinated with maximum intent? Nah, you would have worked that out. 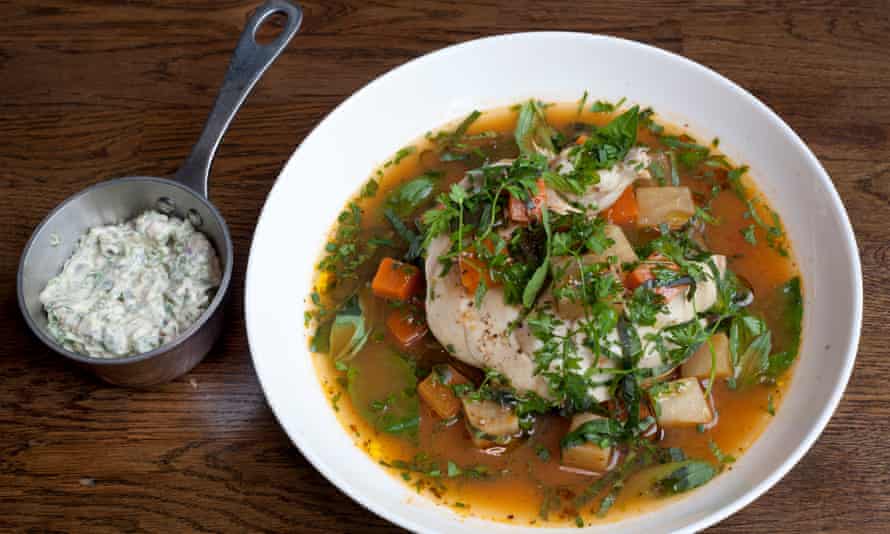 A properly crisped leg of duck confit slumps into a bed of white beans and lardons, with a little salad to help you soak up all the lovingly saturated animal fats and make you feel that your diet is balanced. A chicken breast of impeccable pedigree is presented in a limpid broth of vegetables with, to help it all along, a ramekin of sauce gribiche, that brilliant eggy sauce with mustard and cornichons and so on, which improves most things. We could have had steak frites with béarnaise sauce or roast seabass with new potatoes, or shared a roast leg of Pyrenean lamb with a gratin dauphinoise and wild mushrooms. We could have done all of that, but we didn’t.

After the disappointment of the clumsily made rum baba at the LaLee a few weeks back, it is a joy to have the real thing, made by a man who has been making them for his entire working life. The tall muffin of a savarin has exactly the right, light texture. It has been soaked enthusiastically in syrup and split vertically down the middle so it lies now on its back, surrendered. Rum has been added and then ignited so that the dish sits before me with guttering blue flames. The scoop of crème Chantilly melts gently in the heat. A milk chocolate mousse, dotted sweetly with a ring of buttons, is a reminder that a chocolate pot does not always have to be a dark, dense thing that sucks the very light from the universe. 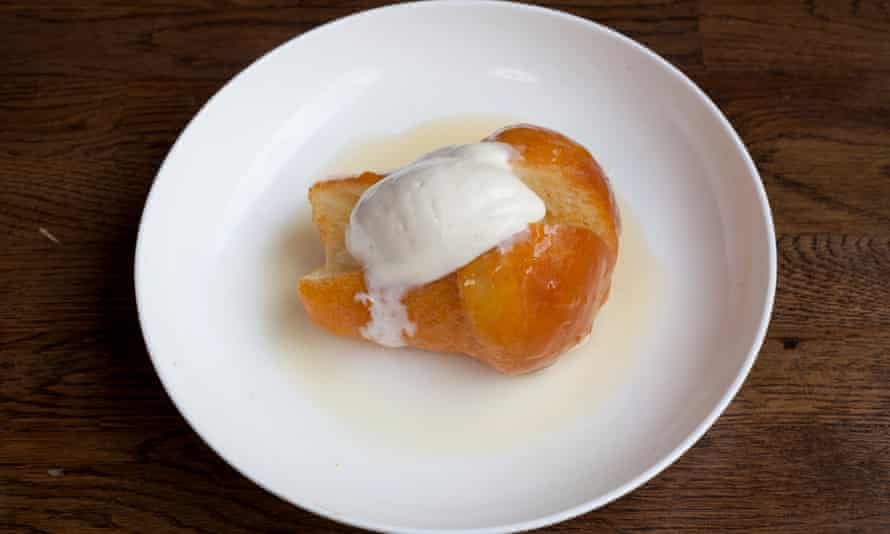 The wine list is a parade of bottles from Burgundy and Alsace, the Languedoc and the Rhone. It is an entirely unsurprising collection. Which is the point of a restaurant like this; indeed, of the entire tradition of which it is a part. A true bistro is not there to surprise or dazzle. It is not meant to place you outside your comfort zone. It is designed specifically to be your comfort zone. Les 2 Garçons is about as complete and delightful an expression of that as I have come across in a very long time.

Jon Parry, who made his name at the Mash Inn at Radnage, Buckinghamshire, with his brand of home-grown produce cooked over fire, has moved on. He has joined the White Hart at Wytham, just outside Oxford. His opening menu, while he finds his feet, includes roast mackerel with fresh horseradish, turbot with a herb butter sauce, rhubarb Bakewell tart and pouring cream, and a lemon posset with a suet sable (whitehartwytham.com).

Dinner by Heston Blumenthal at the Mandarin Oriental Hotel in London’s Knightsbridge, has introduced a highly illustrated card system to enable diners to manage how much interruption they get from the waiters. Customers are invited to place the card of their choice in a holder. They range from the Adventurer – “I’d like the food to do the talking” – through the Guide, to the Maverick. The latter invites you to enjoy ‘a trip down the rabbit hole of Heston’s imagination’. The language may be somewhat grandiose, but the principle behind the idea could be welcome in many restaurants (dinnerbyheston.co.uk).

South African born Hylton Espey, formerly the head chef of Rastella in Falmouth, Cornwall, is to open his first independent restaurant in the town next month. Culture will spotlight Cornish produce and will feature an ever-changing multi-course “Journey Menu”. Dishes will include local lamb with hedgerow herbs and sea vegetables, and Cornish crab with a burnt onion and fermented garlic aioli (culturerestaurant.co.uk).