A MAN and a woman have been killed after a Mini Cooper flipped onto its roof.

Police were called to the smash in Battersea, South London, at 3.26am on Saturday following the horror crash.

Police were called to the scene after the Mini Cooper was found flipped on its roofCredit: Met Police

Four were in the car at the time of the fatal car flip near Latchmere Leisure Centre, on Latchmere Road.

Officers attended along with London Ambulance Service and London Fire Brigade and found the flipped car with all four passengers inside, MyLondon reported.

Despite desperate efforts from emergency services, two passengers were pronounced dead at the scene.

The driver and another passenger remain in hospital but their injuries are not life-threatening. 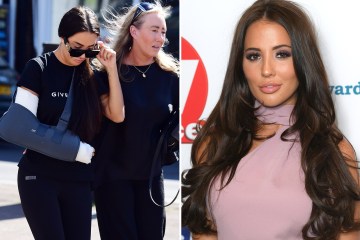 A 22-year-old woman, said to be driving the car, was later arrested on suspicion of causing death by dangerous driving.

No other vehicles were thought to be involved in the collision.

A spokesperson for the Met warned that “extensive road closures remain in place as the investigation continues.”

Cops are keen to hear from anyone who may have witnessed the collision or have dashcam footage of the incident.

Anyone with any information is should call the Serious collision Investigation unit on 020 8991 9555 and give reference 1112/16July.

It comes after two other horror car crash tragedies saw a baby and a toddler killed on Britain’s roads in separate incidents.

On Wednesday a baby boy was killed when the car he was in crashed and flipped onto its roof in Clacton, Essex.

One horrified resident rushed out her home and desperately tried to resuscitate the six-month-old by the roadside, but he died in hospital.

Meanwhile on Saturday a three-year-old boy was killed in a horror accident involving a tractor.

His desperate parents put him in the car and later desperately waved down a passing ambulance.

Despite best efforts from paramedics, the little boy died before they could get him to hospital.