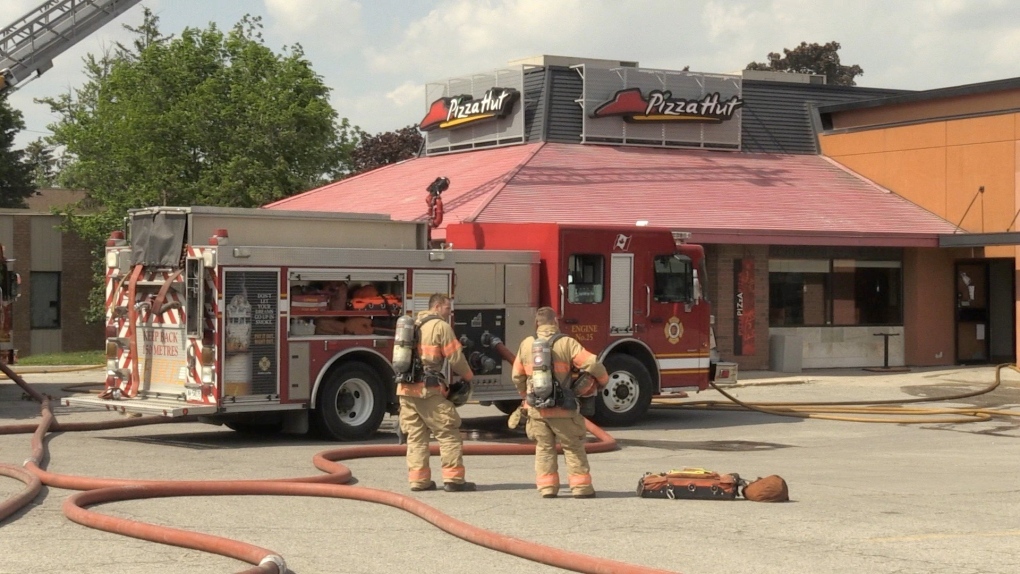 A fire that tore through a London, Ont. Pizza Hut on Tuesday afternoon has been deemed suspicious, and damage is estimated at $1.5 million, according to London police.

According to a social media post by the London Fire Department, flames were seen shooting out of the roof and crews were met with heavy smoke when they arrived at approximately 3:40 p.m.

Ontario Fire Marshall Investigator Clive Hubbard said the fire at the Pizza Hut — located on Huron Street and Highbury Avenue — started on the north side of the building, where it spread into the roof and up into the attic, causing a “considerable” amount of damage.

Hubbard added that the fire was isolated just to the Pizza Hut due to a fire separation wall between the restaurant and the rest of the plaza. The restaurant and entire plaza had to be evacuated.

Fire crews are seen at a Pizza Hut on a Huron Street and Highbury Avenue in London, Ont. on May 31, 2022 after a fire broke out Tuesday afternoon. (Jim Knight/CTV News London)That fact is a relief to the owner of Progressive Drug Mart which is directly on the other side of the fire wall.

“[We] are thankful that everyone’s safe and we were worried of course at one point it’s a little bit more work, but we are just you know, pushing through. So trying our best in this situation,” said Shannon Yuen.

All of the businesses in the plaza were closed Wednesday as work progressed on separating the electricity and water from the restaurant to the rest of the plaza.

“We also safely transported our refrigerated items and vaccines and all that to the other store,” she said.

The scene attracted many onlookers and some regular customers who were concerned if the popular restaurant would re-open.

“I hope it’s get rebuilt soon. Yeah, because that’s sad. We have to drive far to get Pizza Hut,” said Darlene Williamson.

No injuries were reported from the fire.

The investigation by the London Police Service and the Office of the Ontario Fire Marshal is ongoing. Police ask anyone with information to contact London police or Crime Stoppers.