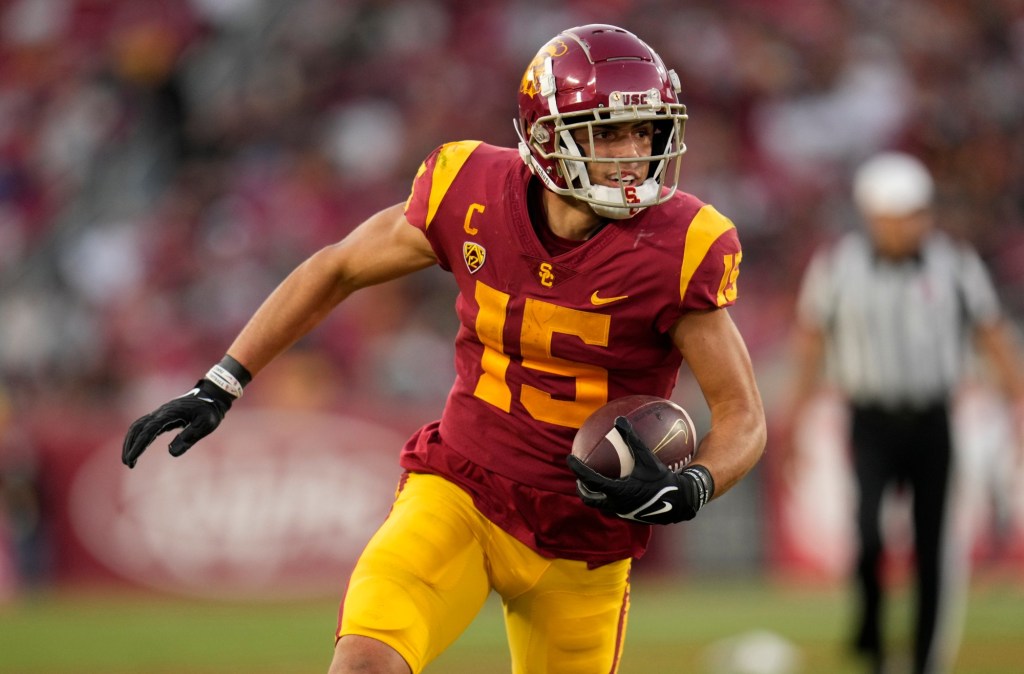 LOS ANGELES — Representatives from a dozen NFL teams stood on the sidelines as former USC wide receiver Drake London held his pro day on Friday, his first public workout since breaking his ankle in late October.

London did not perform any of the traditional pre-draft tests, instead showing off to the talent evaluators his quick feet and route-running skills, while proving his ankle was on the mend.

“I can’t go into the draft and not do that. Have to show these GMs and coaches in person that I can move the way I do,” London said after his workout, white Crocs revealing the fresh surgical scar on his right ankle. “I did that today.”

London is widely seen as a potential top-10 pick in this month’s NFL Draft after he pulled down 88 catches for 1,084 yards and seven touchdowns in the first seven-and-a-half games of his junior season.

But the campaign was cut short by his broken ankle, suffered as he caught a touchdown late in the second quarter against Arizona. London had to be carted off the Coliseum field with an inflatable cast around his foot and tears streaming down his face.

“Painful as hell,” London said. “It’s football, 100% injury rate. You have to be ready for it whenever.”

It wasn’t until a week before the NFL Combine that London was able to start running again, hitting six miles per hour on the treadmill. His agency set him up with former NFL receiver TJ Houshmandzadeh to help him train and prepare for the draft.

“I’ve been learning a lot from him. My body feels better. I feel stronger, faster. And I think I just matured in the game,” London said. “At the end of the day, this is like my second year of really playing wide receiver, really playing football [and not basketball]. So I feel better by the day.”

It wasn’t a perfectly smooth recovery. London’s pro day was originally scheduled for April 5 but was delayed 10 days after he suffered a minor hamstring strain. But he was able to return in time for Friday’s workout.

Houshmandzadeh and former NFL quarterback Jordan Palmer went through drills and routes with London in front of Chargers offensive coordinator Joe Lombardi as well as representatives from the Jets, Commanders, Lions, Texans, Titans and Cardinals.

Former USC receivers coach Keary Colbert — now with Florida — flew across the country to be there for London and answer any questions from teams.

While questions remain about London’s speed, particularly following his injury, he opted not to run the 40-yard dash.

“Everybody has 6-8 weeks, a couple months to really train for that, whether it’s broad jump, vertical, all of that,” London said. “I was just trying to get back running at the end of the day.”

For those who have questions about his speed and ability to get separation from defensive backs, he pointed repeatedly to his game film.