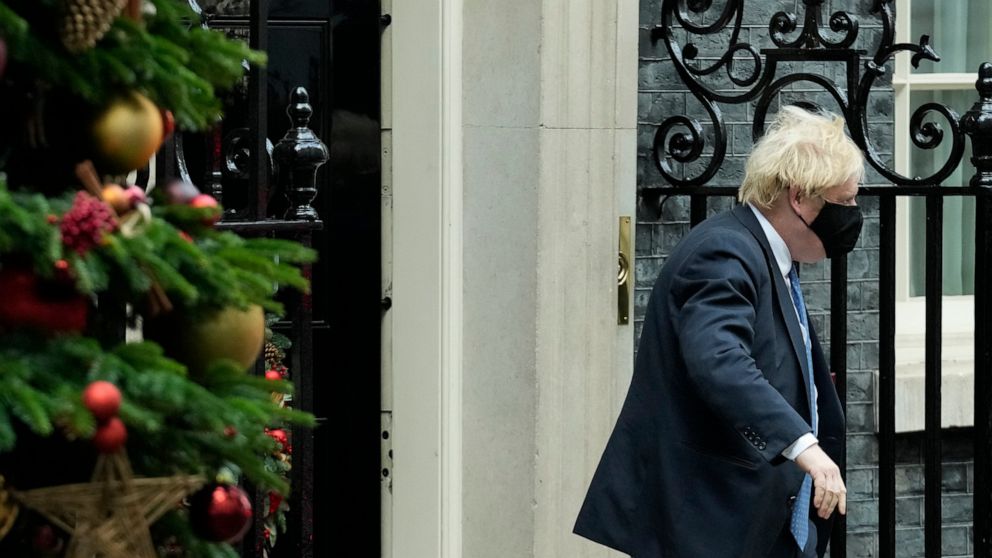 The reports surfaced as many in the U.K. and elsewhere are increasingly concerned about festive parties and socializing over Christmas this year amid the spread of the new omicron variant.

Labour lawmakers wrote to London’s Metropolitan Police asking them to investigate reports that two parties were held at No. 10 Downing Street in the run-up to last Christmas at a time when people were banned from socializing indoors with anyone not in their household.

The police force said Saturday that it was aware of “widespread reporting” of “alleged breaches of health protection regulations” at a government building last November and December. It said although it did not routinely investigate “retrospective” breaches of COVID-19 regulations, it was considering the complaints.

The Daily Mirror reported on Tuesday that Johnson’s team held a festive party ahead of last Christmas, while London was under strict COVID-19 restrictions. It also reported that Johnson gave a speech at a packed going-away party for a senior aide last November, when the country was under lockdown.

The paper said each party had 40 or 50 people crammed into the room.

“If these events did take place, it implies that there is one rule for the government and another for everyone else,” Labour lawmaker Barry Gardiner said.

Johnson has not denied the events took place but said no rules were broken, although he did not elaborate when pressed.

Britain’s government this week reintroduced mandatory mask-wearing in shops and on public transport, after scrapping almost all coronavirus restrictions and social distancing rules in the summer.

Some scientists — including Jenny Harries, head of the U.K. Health Security Agency — have warned that people should not socialize over the upcoming holidays unless necessary. But Johnson has maintained that the government will not change its guidance about “how people should be living their lives,” and said people should not cancel events like parties and school nativity plays.

Follow all AP stories about the pandemic at https://apnews.com/hub/coronavirus-pandemic.

Angela Rayner spotted leaving her London home with her boyfriend

Police arrest driver, 26, for murder ‘after he ran over both knifeman and the woman he was stabbing’