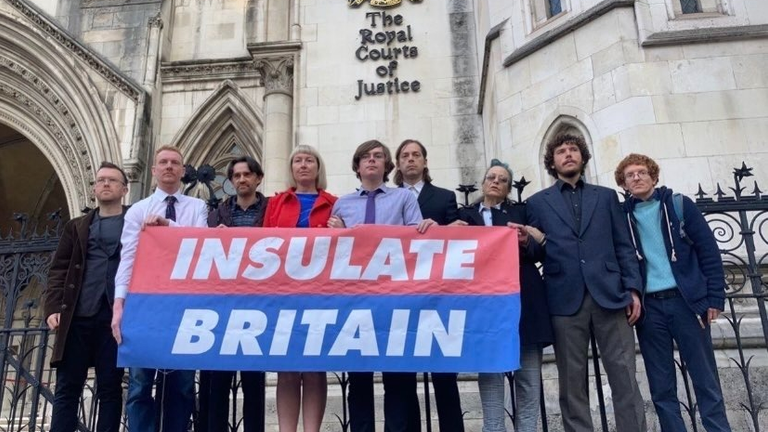 Nine Insulate Britain climate change activists have been jailed for breaching an injunction designed to stop them from blocking roads.

The nine, aged between 20 and 58 years old, were jailed at the High Court in London after they admitted breaching the injunction by taking part in a blockade at junction 25 of the M25 on 8 October.

Submissions made by Ben Taylor, 37, to the court on Tuesday were described by Dame Victoria Sharp as “inflammatory” and a “call to arms”, and he was therefore given a longer sentence of six months “to deter (him) from committing further breaches”.

Insulate Britain, an offshoot of Extinction Rebellion, is a campaign group calling for better insulation for UK homes to help tackle the climate crisis. The activists have blocked motorways, the Port of Dover, and roads outside Parliament as part of their campaign – with many demonstrators gluing themselves.

Image:
Nine Insulate Britain activists have been jailed for breaching an injunction 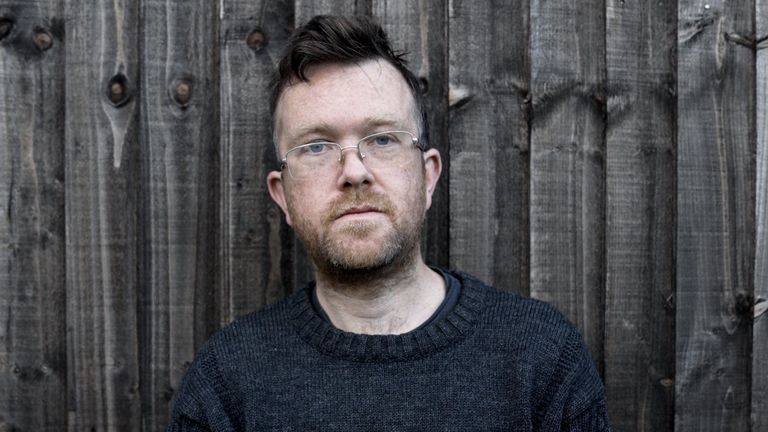 Image:
Oliver Rock has been jailed for four months

Earlier today, the judge, sitting with Mr Justice Chamberlain, said there was no alternative to custodial sentences because the group’s actions were so serious and they had made it clear they intended to further flout court orders.

She said: “The defendants, or some of them, seem to want to be martyrs for their cause, and the media campaign surrounding this hearing appears designed to suggest this.

“We, however, have to act dispassionately and proportionately.”

The group and their supporters chanted “we are unstoppable, another world is possible”, as they were led to the cells through the dock by security officers. 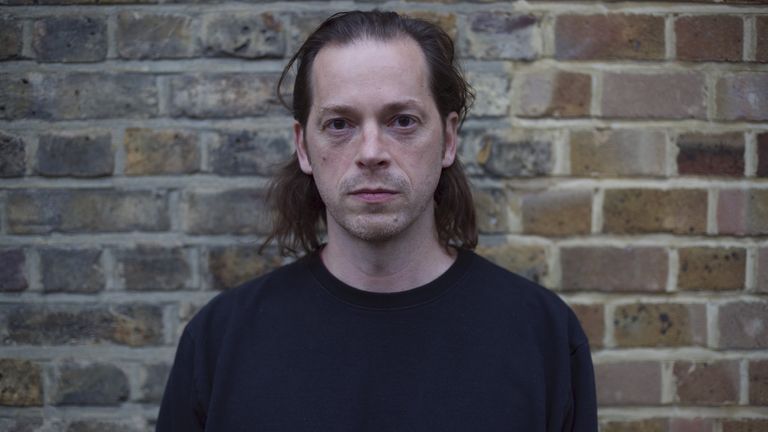 Image:
James Thomas has been jailed for his role in breaching the injunction 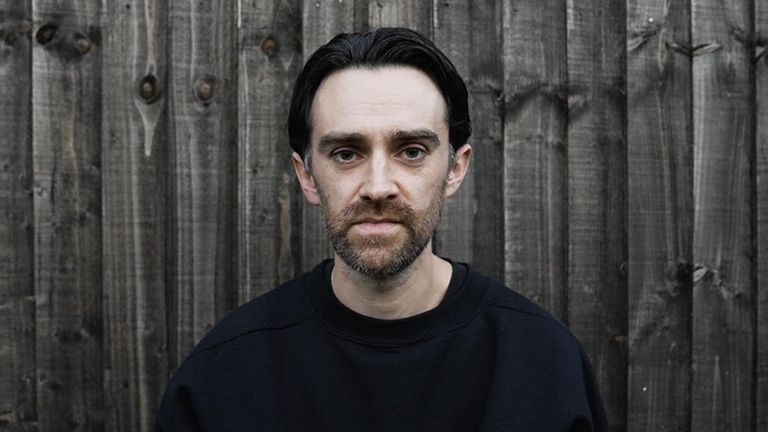 Image:
Tim Speers has been jailed for four months

Raj Chada, a solicitor at Hodge Jones and Allen law firm who supported the protesters, said: “With these prison terms, the long and honourable tradition of civil disobedience is under attack again.

“Rather than leaving courts to imprison those that raise the alarm, it should be the government that acts to protect us against the climate crisis.”

Insulate Britain says it intends to continue with the protests, which have sparked anger among motorists and others affected by the blockades, until the government agrees to insulate homes.

Myriam Stacey QC, representing the government, told the court on Tuesday that the injunction banning protest activity on the M25 motorway was granted by a High Court judge on 21 September. 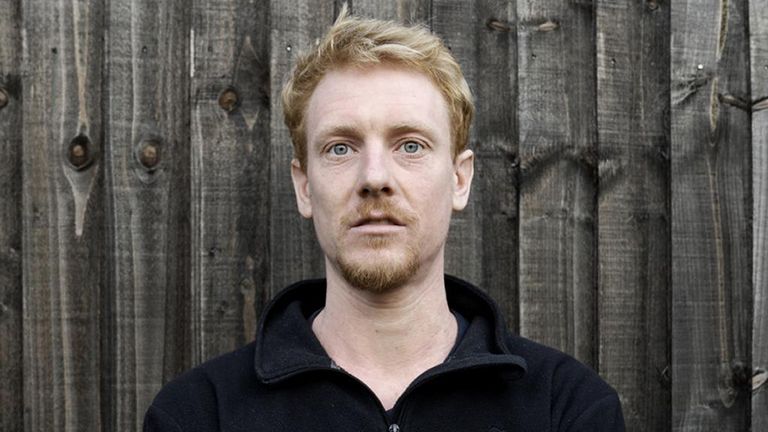 Image:
Roman Paluch-Machnik is one of the seven campaigners who has been jailed for four months 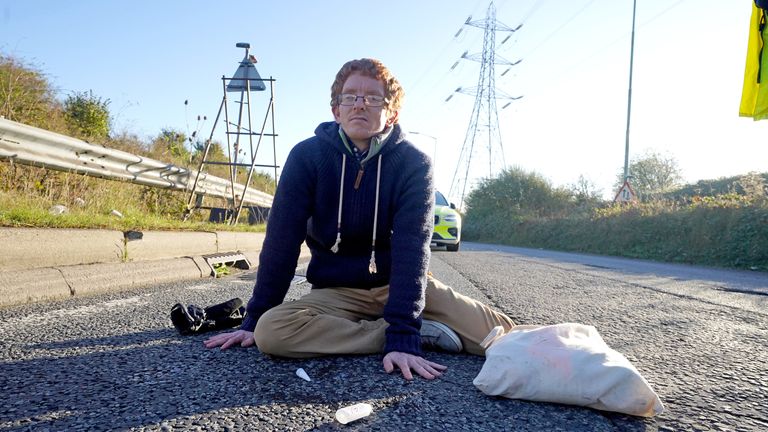 Image:
Ben Buse, who has been jailed, is seen glued to a road near a junction of the M25 and A1 earlier this month

She said it was accepted by National Highways that the protests fell into the category of “civil disobedience”, and that a National Highways official had described the action, which began on 13 September and has continued for around nine weeks so far, as “unprecedented and sustained”.

She told the court the official also described the protesters as “peaceful and compliant”, and said they are “loosely affiliated” to Extinction Rebellion.

She said the protest on 8 October began at around 8.30am, with protesters blocking two lanes, and it ended shortly after 10am when the final two protesters – who had glued themselves to the ground – were removed by police.

The High Court has so far issued five injunctions to prevent protesters from blocking roads.

They include four injunctions granted to National Highways, banning demonstrations on the M25, around the Port of Dover and on major roads around London, and one to Transport for London (TfL).

TfL was granted a civil banning order aimed at preventing protesters from obstructing traffic on some of the capital’s busiest roads.

Those who breach the injunctions could be found in contempt of court and face a maximum penalty of two years in prison or an unlimited fine.

Ms Stacey said further committal proceedings will be issued against other Insulate Britain protesters by the end of the week, relating to protests on 27 October.

She also said evidence is currently being gathered to bring proceedings in relation to protests on 29 October and 2 November.

So far, 161 people have been involved in the roadblock campaign and there have been more than 800 arrests.