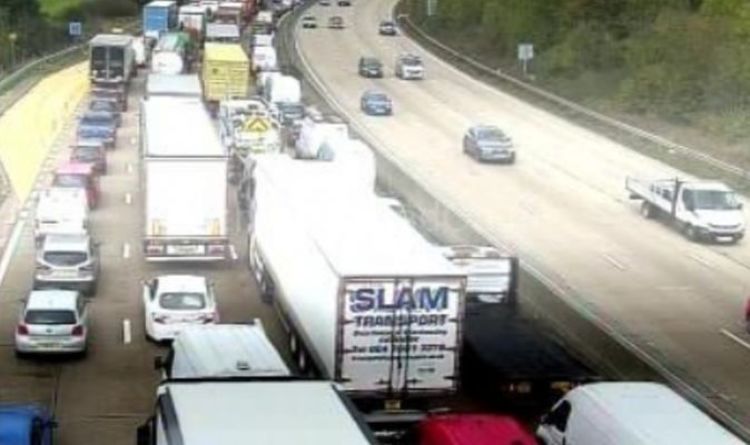 Motorists have been stuck on the gridlocked route throughout the morning with traffic stretching back nearly nine miles. Delays of up to 90 minutes are being reported. A Hertfordshire Police spokesperson told Express.co.uk: “Police were called shortly after 6.45am today (Friday, October 29) following a road traffic collision on the anticlockwise carriageway of the M25, between junctions 23 and 22.

“It was reported that three vehicles were involved, one of which was not at the scene on police arrival.

“Officers attended, alongside colleagues from the fire and ambulance services.

“Part of the motorway were shut.

“The driver of one of the vehicles (a Ford Transit van) was taken to hospital with serious injuries.

“Two vehicles were recovered and Highways are currently in attendance to clear debris and spillages from the carriageway.”

Highways England said the collision happened on the M25 anti-clockwise – and has forced the full closure of the carriageway between J23 (South Mimms) and J22 (near London Colney).

Emergency services, as well as National Highways Traffic Officers, rushed to the scene.

The vehicles involved in the collision have successfully been removed from the carriageway.

“National Highways Traffic Officers are also on scene to assist with traffic management.

“This spillage now been treated by our contractors on scene.

“Traffic caught within the closure is being turned round and released from the back of the queue.

“There are long delays of up to 90 minutes on approach to the closure.

“There is approx. 8.7 miles of congestion leading back past J25.”

Essex Travel News tweeted the motorway has been closed anticlockwise between two junctions in Hertfordshire, with traffic stretching back for three junctions.

Several motorists flooded Twitter to vent their frustration at being stuck in traffic for several hours on the impacted M25 carriageway.