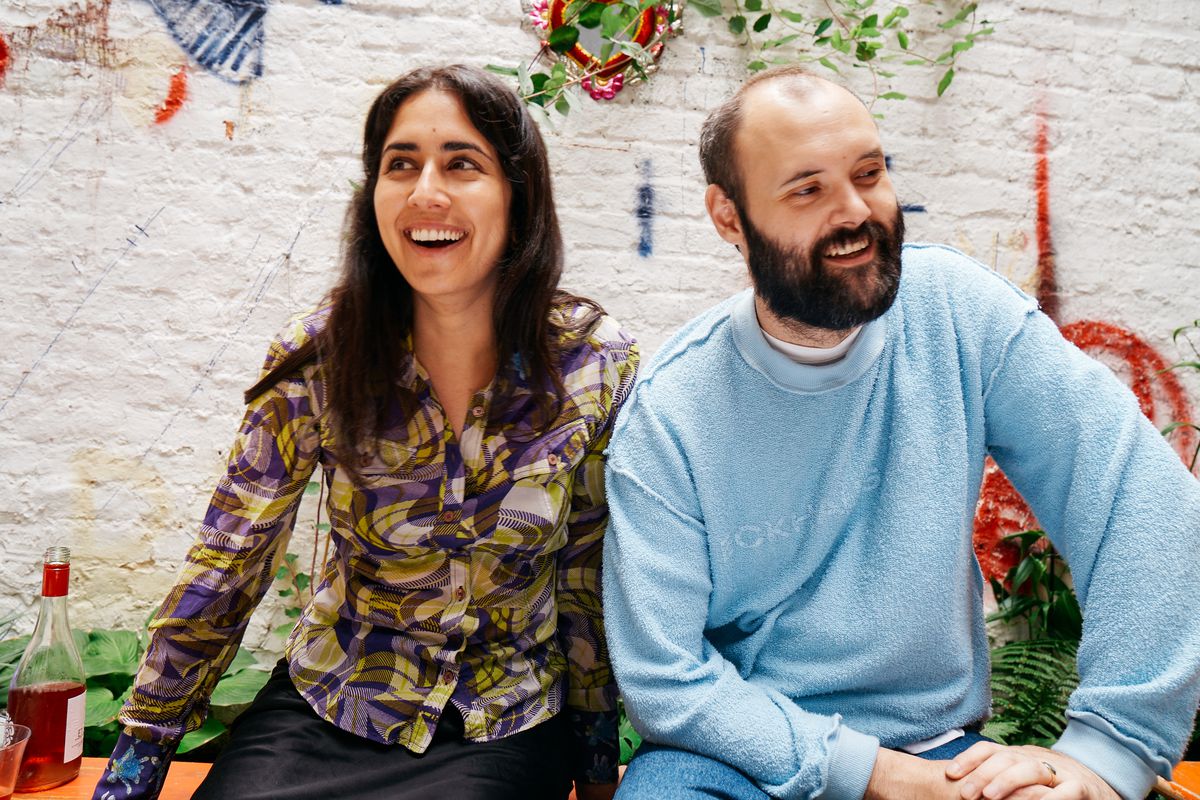 Missy Flynn and Gabe Pryce are overwhelmed. Not by opening a debut central London restaurant amid well-documented supply chain problems, relying on hired stools, third-choice glasses, and wondering where the tequila is, but by something more fundamental. Sitting in their outdoor terrace, it sounds like Pryce can’t quite believe he’s sitting in it at all. “My entire life I’ve known Lexington Street is a place of quality restaurants. A very special, small stretch of the heart of London. And I’m still completely overwhelmed by the fact that we have a restaurant here.”

They both emphasise that Rita’s Soho, which is open for dinner and will open for lunch when they’ve hired enough chefs to join Pryce in the kitchen, is both built on everything Rita’s has been over the past nine years, and a break from the outward devil-may-care itinerancy that has been (at times rightly, at times wrongly) applied to what they do.

There were Dalston nightclubs, taproom residencies, and the celebrated Mare Street space in Hackney. But this is something of a growing up. “I want people to have dinner. Or for lunch. To come to a restaurant and have a meal and not be confused. I don’t want them to not know what they’re in for. We cherish the restaurants that are restaurants — you go and sit with your friends and you eat your dinner. Not a tiny bit of this a tiny bit of that,” Pryce said.

Margaritas will still be shaken, and natural wine will still flow; maturation doesn’t mean there’s no sharing, no hands, no mess. A tear-and-share garlic bread modelled on Parker House rolls and doused in green-flecked butter puts that to bed immediately. But the rest of the menu — beef tartare; dressed oysters; a whole fish with black beans, a variation on salsa macha, and tortillas; and a “steak dinner” with creamed greens and crisp fried potatoes — speaks to a restaurant that is still devoted to American cooking as a point of reference, but isn’t letting old ideas about its identity get too stale or comfortable.

Missy Flynn and Gabe Pryce in their new garden, in Soho.

Flynn says one dish fits this maturation to a tee: “There’s a really nice quail and grits dish that to me is very Rita’s then and Rita’s now. People loved the patty melts and fried chicken and stuff on Mare Street, but this particular dish is definitively the Rita’s style of cuisine.”

Pryce adds that the dish now entails milling their own grits with heritage corns from the U.K. and U.S., and makes it even clearer that this edition of Rita’s wants to put some preconceptions to bed. “When you’re doing an offering that people have considered, or previously considered … ‘Americana,’ to develop that has always been quite a hard conversation in explaining to people how serious we are. People have misguided ideas about why we cook a cuisine from a certain place and what we cook.” They both say that using suppliers like farmer Tom Jones for meat, and Max Onslow of Bateman Road in Chingford for vegetables grown to their guidance, is the kind of thing they have always wanted but never been able to do until now.

Their new home, a listed building, was delayed by COVID-19 like so many restaurants. But Flynn says that brought time as much as stress. It allowed them to build: first a team, despite the limitations of a staffing crisis, and then a restaurant, in tune with the demands of the space that houses it. On staffing, she’s both realistic and proud about the current situation: “I hope we’ve made a business that people really want to work in, as opposed to trying to fill a load of spots with anyone. We want to be creating opportunities for people that are more than jobs.”

The space feeds into the feeling that the duo wants to challenge want people think Rita’s is. Both frequently hark back to Mare Street, the Hackney restaurant that established it as one of London’s buzziest dining rooms, and temper nostalgia with how much is determined by small things like … Toilet paper.

There’s one bathroom in the whole place, and Pryce says that “things we used to do… like the black sauce chicken wings on Mare Street, they were great. But if you had them here they’d probably ruin your night. You’d have to go home and wash. The basement on Mare Street was basically like a Roman baths of teenagers washing tar off their fingers, and we can’t do that here.”

“This is one of the first projects we’ve done when we’ve had time to consider things as a sequence of events, and the building is a key part of those events,” Flynn adds. And that continues into the design, with canvases from Los Angeles artist Michael McGregor featuring their devilled eggs, and a definite aversion to what they dub “a CAD machine set up to do ‘What a Restaurant Should Look Like in 2021.”

Nor is it set up to to be an East London restaurant that wandered west and found itself central. Flynn reflects on how “Soho has this perception of being full of chains and elitist,” and then on the other side of the story: “Maybe that’s true, but it’s also a neighbourhood. It’s not as cordoned off from reality as people might think it is.”

It’s a fitting statement of intent for a duo who have set up home at the same time as their restaurant has put down roots. Both grew up in central London, and they moved to the area to be closer to the restaurant when it was clear the delay would be long, and Pryce is getting used to the change in surrounds outside of work. “I’ve always been the person who shouts out the windows at people in the street when I’m trying to sleep and I don’t anymore. It’s just nice to see people out in Soho now.” Now, they hope to see them at their place.