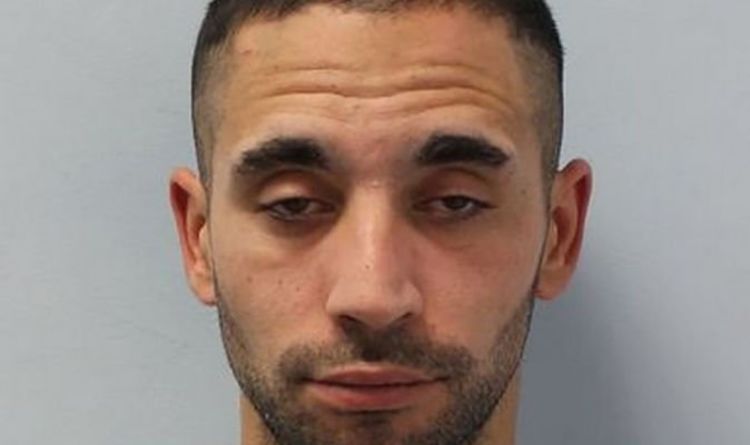 Tony Corby confronted the 86-year-old woman with the large knife after breaking into her home at 7.10am and waking her. A court heard the burglar grabbed two £20 notes from the victim’s handbag, smashed the backdoor open and fled.

Corby went onto break into the homes of two further elderly women in the same hour, ruining their Christmases too.

But the callous yob was jailed for a total of eight years and six weeks on Wednesday at Harrow Crown Court. The defendant pleaded guilty to two counts of burglary and a single count of aggravated burglary.

The court was told Corby first disturbed the 86-year-old in Hornsey, north London. The woman was woken up by the sound of movement downstairs and was confronted by the knife-wielding burglar.

Half an hour later, after he had targeted a second property, a neighbour heard the alarm sounding before spotting Corby coming out of the side access riding a bicycle.

When she asked him what he was doing, Corby told her to “f*** off”.

The victim then called her son, who travelled to the house and found that the glass in the rear patio door had been smashed, costing around £450 in damage. Nothing had been stolen.

A further 20 minutes later, Corby broke into a third house.

The victim, a carer for her husband who lives with vascular dementia, heard the house alarm going off.

She went downstairs to investigate and found that the glass in the back door had been smashed, though again nothing had been stolen.

The damage was estimated to have cost around £300.

Having already received calls regarding the earlier burglaries, police were able to trace Corby to an address in Pinner Green through various reports and sightings. The address was known to police.

Upon arrival later the same day, Corby was arrested. A search of the flat resulted in a mobile phone and flick knife being seized by police, though there is no evidence to show this was the weapon pointed at the first victim.

Corby answered no comment in police interview, but detectives recovered CCTV evidence from the time of the burglary.

The court heard Corby had previous convictions for domestic burglaries in 2008 and 2021, in which he served time in custody.