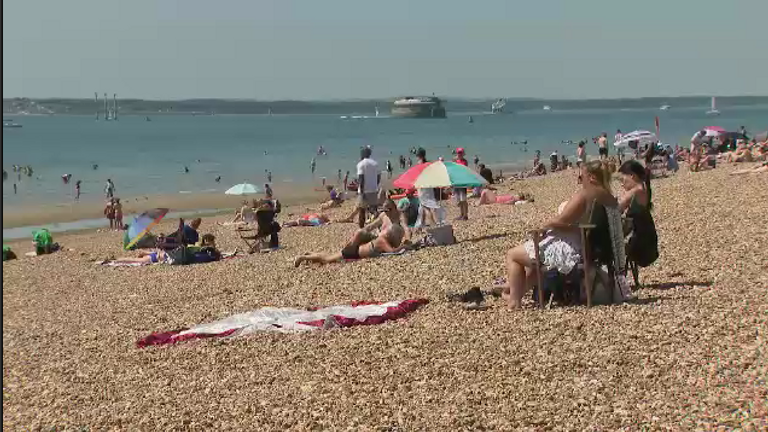 Today is the hottest day of the year so far in England and Wales, with both countries recording temperatures higher than 30C – and the heatwave is set to continue into next week.

In England, 30.3C was recorded in Coton In The Elms in Derbyshire on Saturday, surpassing the 29.7C recorded in south-west London on 14 June.

Also on Saturday, record temperatures were recorded in Usk, Monmouthshire, Wales, at 29.6C, and in Threave, in the Dumfries and Galloway region of Scotland, at 28.2C.

Thousands have headed to beaches across the country, including Weston-super-Mare and Brighton, with people seen cooling off on surf boards and inflatables in the sea.

Away from the coast in Birmingham a fun fair owner created a sandy beach for his customers to make the most of the sunshine. Image:
A video screen shows a hot weather warning as fans wait for the start of the British Formula One Grand Prix on Sunday. Pic: AP

“We only got open last year for roughly three weeks, hopefully the sun does bring [customers] in and it isn’t too hot.” 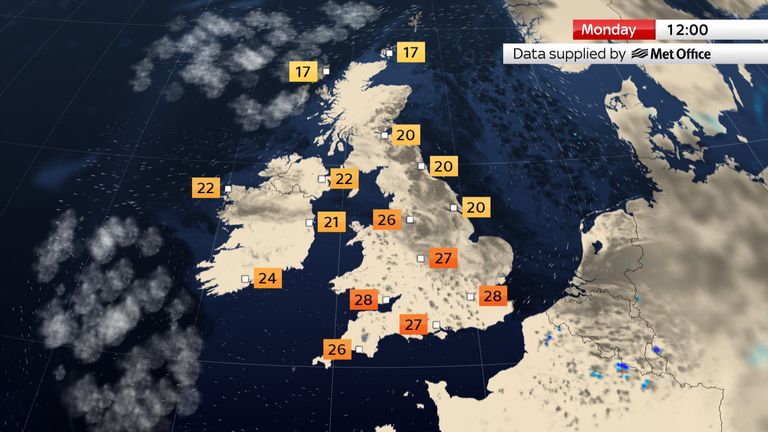 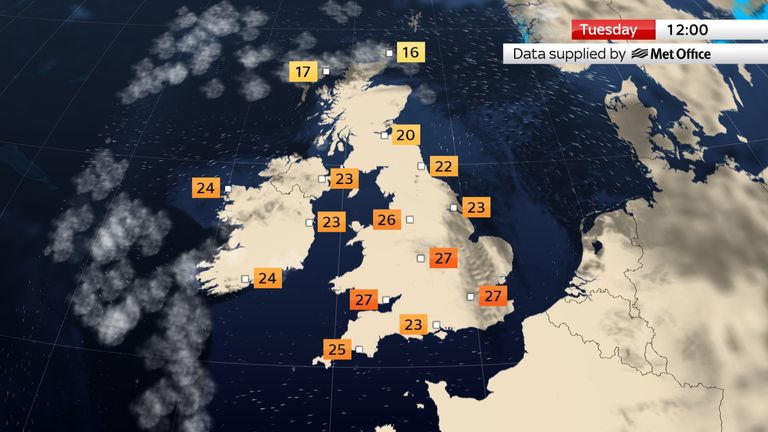 The extended hot spell of weather is expected to last for much of the week ahead, perhaps even to next weekend, with temperatures in some parts of the country due to hit the high twenties.

A Met Office spokesperson said: “We are expecting temperatures to continue on the high side right through until Thursday, although the day-to-day detail will change and there is a tendency for the highest maximum temperatures to migrate west.

“So, we are expecting Monday and Tuesday for the maximum temperatures to be in the South West and in South Wales, and then later in the week temperatures climbing across Northern Ireland and the North West.”

Tom Morgan, meteorologist at the Met Office, added: “It’s going to mean that people are really going to feel the effects of the heat as we go through this week.” Image:
People enjoyed the weather on Bournemouth beach in Dorset this weekend Image:
A Sunbather lounges on a deck chair in Green Park, London on Saturday

Sunday’s high temperatures mark the beginning of an official heatwave across the UK, as in London and the South East, temperatures must exceed 28C for at least three days to record a heatwave, and Sunday is the third day.

This requirement drops to 27C (80.6F) in the Midlands and 26C (78.8F) in the South West, which has also been met on Sunday and is also expected to continue throughout the week.

Public Health England (PHE) and the Met Office warned people to take care during the hot spell, advising people to stay hydrated, apply sunscreen and not to leave children or pets in cars.

PHE urged people to look out for others who may struggle in the heat, such as older people and those who live alone.

Weather: Today is officially the hottest day of the year so far