By Madeleine Ross For Mailonline

An ice rink in a shopping centre left customers very unimpressed over the festive period as a crucial ingredient was left out – the ice.

Children and parents still tried to make the best of the rink on St Anne’s Road in North London, despite the fact they were skating across a floor.

Still wearing ice skates, skaters tried to push off across the plastic tiles, only to be defeated by friction.

One child had been given a penguin aid to help them stand up on the plastic rink.

Still wearing ice skates, skaters tried to push off across the plastic tiles, only to be defeated by friction. Others chose to keep their own shoes on Commenters online found the humour in the situation and pointed out that some rink users were just wearing normal shoes, MyLondon reported.

Hanah Zarah filmed the ‘simulation’ and laughed: ‘No, only in Harrow. Only in Harrow will they have a floor, a literal floor where they are skating on.’

Others suggested that the skaters were NPCs, or non-playable characters, a video game term for people who are not important.

A TikToker user said the floor should be oiled with baby oil to help it become more slippery. 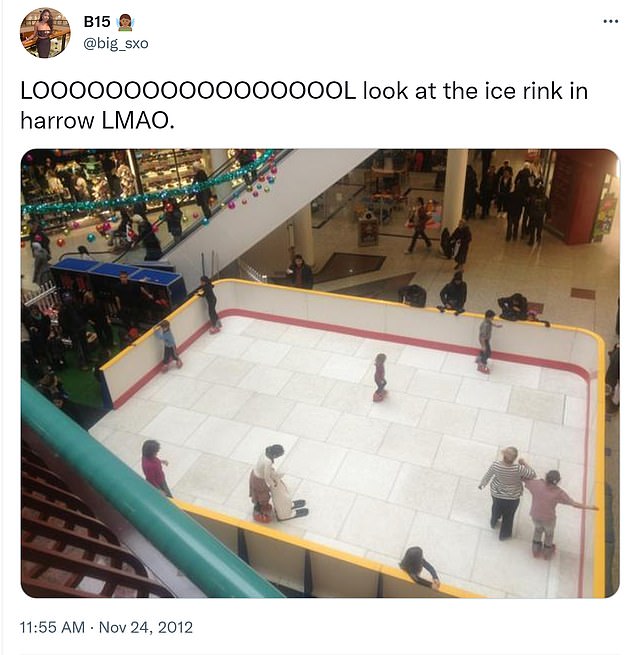 A tweet from 2012 when the rink was introduced. Harrow residents were not impressed by the synthetic ice ten years ago

We Are Harrow boasted of the free skating on their social media, encouraging parents to bring their children to the event.

The business improvement district team warned time on the ‘ice’ would be limited to 30 minutes if it got busy.

The synthetic rink – which advertises as a ‘skating rink’ – is not a new addition to the Harrow shopping centre.

The rink also failed to impress residents of the North London suburb in 2012, with some calling it ‘naff’ and another describing it as a ‘joke’.