For Venezuela-born Mary Perez, it’s the butcher, Italian deli and a French café in “Stratford Village” south of Kensington High Street that keeps her in the affluent west London neighbourhood. The small cluster of streets between Earl’s Court Road, Stratford Road and Marloes Road, which also includes popular pubs such as The Abingdon, has a more peaceful air than the main thoroughfare of the high street with its slightly dispiriting string of chain stores.

“I love having good-quality food stores on my doorstep and the European feel of the area,” says the mother of two, who works in finance, on why she’s lived in Kensington for 20 years. She’s just downsized from a town house to a four-bedroom apartment in a portered block near Stratford Road.

“It took a long time to find the right apartment. I believe I paid a fair price for it [she declined to say how much] but expect properties in the area to lose value now.”

She’s not alone. Estate agents agree that average prices in prime central London will fall next year. Knight Frank Research estimates this will be by 3 per cent while Savills says 2 per cent — while expecting the national average to fall by 10 per cent.

In Kensington, prices are softening already. Lots of Rightmove listings in W8 — a quadrangle between Cromwell Road, Kensington Gardens, Notting Hill and Holland Park — have had price reductions, mostly flats. Lower offers are now being made on properties below £1mn, the tranche of the market most affected by interest rates, says Andrew La’Personne of agent Marsh & Parsons after mortgage rates rose in the autumn.

Period architecture, such as here in Kynance Mews, along with good schools, make Kensington much sought after

Above £1mn — which takes in much of the Kensington market — buyers are often buying without financing, so rate raises are not such an issue, he says. “We have several buyers who are renting and waiting for the right house to come up for sale.”

A three-bedroom Victorian terraced house in Holland Street, off Kensington Church Street, went online last month at £3.5mn; it had five viewings within 48 hours and three second viewings booked the following week, but did not receive any offers.

Nevertheless, it has been a busy year in the family house market — the number of transactions between January and November was 52 per cent higher than the five-year average leading to 2019 (though 7 per cent down on 2021’s record level). 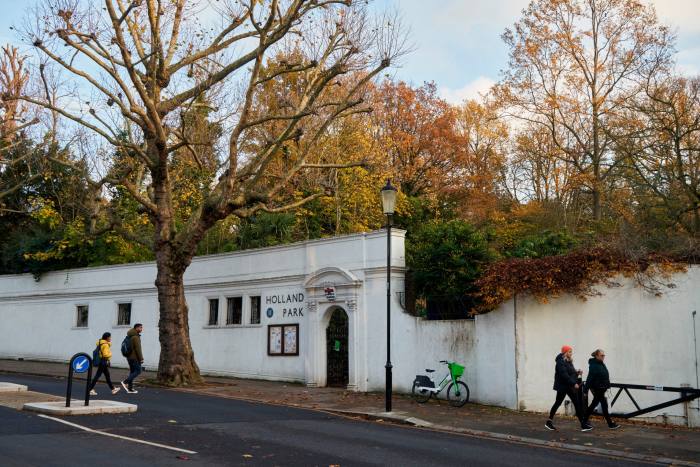 Holland Park is one of the area’s popular green spaces

New inquiries are down, says Josh Grinling of Winkworth. “After the ‘mini-Budget’ [on September 23] a number of overpriced properties have been reduced.”

Andrew Weir, of London Central Portfolio, a buying agent, reports that buyers — including Perez — are becoming choosier. “Large houses have been selling, but only if a property is on the right street, or the right side of the street; and if the layout and everything else works for them.”

According to Weir, two sales that completed in late November were to US dollar-denominated buyers paying cash. One house at a guide price of £12mn near Holland Park has been purchased by a family who have been renting on the same square, he says. When the exchange rate hit $1.13, they thought it was a good time to buy.

The other is a three-bedroom apartment in a mansion block south of the high street for £3.5mn. Both sold for their guide prices, he says. 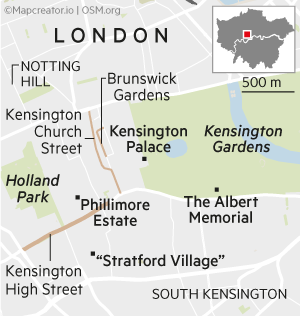 According to Weir, the so-called “right house” is often on “the Phillimores” — the Phillimore Estate is a grid of stucco-fronted semi-detached villas and town houses roughly between Holland Park and High Street Kensington tube station.

These, and some homes on the other side of Kensington Church Street, can be more affordable than those on Notting Hill’s premium garden squares, which have sold for £4,000 per sq ft, according to LonRes. In March, a five-bedroom semi on Brunswick Gardens sold for £8.4mn — or £2,462 per sq ft — only about £898,000 more than it sold for in 2007.

The past four sales in the street have been for more than £10mn — with a seven-bedroom semi-detached house selling in April for £11mn. Along with Eldon Road and Cottesmore Gardens, Victoria Road is part of the De Vere Conservation area, a mix of late Georgian houses, early Victorian villas and later Victorian terraces towards Gloucester Road and Palace Gate. “Correctly priced” properties are still selling, says Grinling. In August a one-bedroom ground-floor flat in Pembroke Place, a little square of pastel-coloured terraces south of the High Street, was advertised at £995,000. The flat sold at £975,000 to an Asian family buying for their daughter studying medicine at Imperial College. “The vendor, who had spent lots on interior decoration, wanted over £1mn but I told her that was unrealistic. She has lost £100,000 on the property with stamp duty and refurb costs,” he says.

Kensington’s rental market is still highly pressurised, with a lack of a available properties causing prices to rocket. So far this year, the average rent for a property in W8 is 24 per cent higher than it was in the same period a year before. The number of rental properties changing hands was down 49 per cent on the average annual rate in the five years to 2019.

So far this year, the average rent for a property in W8 is 24 per cent higher than in the same period a year ago

A five-bedroom house in Stratford Road has recently let at £4,500 a week to an American family, says Sarah McIntyre, head of lettings at Harrods Estates, while there’s a waiting list of overseas students for one-bedroom flats at 375 Kensington High Street, a serviced apartment block towards Kensington Olympia with rents of £650-£675 per week.

The redevelopment of the exhibition centre to include a music venue, theatre and restaurants aims to attract new people to the area when it completes in 2024.

Oissila Lawton, originally from Paris, and her English husband Vincent love the Stratford Village area, having lived in Kensington for 35 years. “We didn’t want to live in Notting Hill and find Kensington calmer and less built up than Chelsea,” she says of their decision to stay in the area but downsize during their retirement.

“There are some very good pubs and cafés here, and [it’s great] having Holland Park and Kensington Gardens so close with our two dogs,” says Oissila, who is in her sixties. “Lots of our neighbours are also downsizing locally now,” she adds. A one-bedroom leasehold apartment on the third floor of a building that is a short walk from High Street Kensington Tube station. The property, which measures about 40 sq m, has an annual service charge of £1,750. Available through Marsh and Parsons. 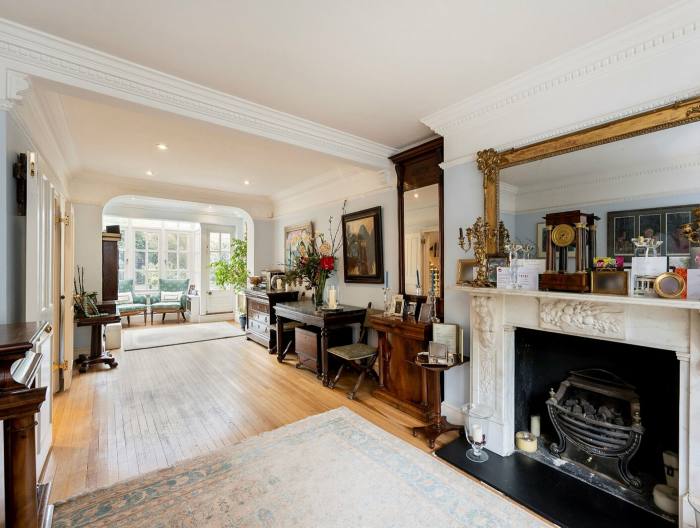 House, Inkerman Terrace, £4.2mn
A four-bedroom terraced house on a section of Allen Street in the “Stratford Village” area. The property, which measures 204 sq m, is arranged over four floors. There are two reception rooms, a garden and two bathrooms. Available through Knight Frank. Renovation project, Strathmore Gardens, £8.25mn
A six-bedroom double-fronted house measuring approximately 482 sq m, in need of complete refurbishment. The property, which according to Rightmove was first listed in April, has recently had its price cut. Through Strutt & Parker.