En route to the recently revamped The Baring in Islington, I wondered if we need a newer, better word for “gastropub”, not least because nobody ever liked that word anyway. In the noughties, it was synonymous with the vanishing of old-fashioned, often cherished things: printed menus, affordable burgers, sticky carpets and packets of Big D peanuts glued to a card behind the bar that, with every purchase, revealed more of a near-naked woman called Bev. None of them survived the great gastropub purge. That said, if you liked poussin, wild rocket, blackboards, Farrow & Ball paint, côtes du rhône and eating on 1950s crockery while sitting on a very stiff, hardbacked chair, this was a golden age.

In the UK in 2022, however, almost all new pub ventures are “gastro” to some extent, with the chef’s name and CV being announced at the same time, and with the same weighting, as the landlord’s. All these gastropubs are not the same, though, and many are just chain pubs in disguise and with a good microwave. The Baring, however, is an exceedingly good restaurant that serves the likes of quail shish, and pig’s cheek and smoked eel terrine, and has taken root inside an old, previously loved building. The chef is Rob Tecwyn, formerly of Dabbous, which was a cool, Fitzrovia restaurant revered at the highest level by the food crowd. “Shall we go to Dabbous on Saturday?” someone would suggest on a Wednesday circa 2015, and I’d collapse in peals of mirth because the place was booked solid for the next 20 weeks at least. Tecwyn has also cooked at a number of dependably brilliant restaurants where I often send people asking for advice: the Bull & Last in Highgate, Moro, Morito and Kerridge’s Bar & Grill to name a few.

His new place is closest in style to the Bull & Last, because they’re both elegant, gorgeously restored pubs, heaving with spit-and-sawdust history and now serving modern European food, as well as, at times, North African and Scandinavian, plus roasts of the highest order on Sundays. What’s more, the Baring’s general manager, Adam Symonds, met Tecwyn in his Bull & Last days, and you can tell from the second you take a seat that this is a venture born of a hundred late-night conversations about gastropubs, and about what is stale and what is sublime.

There’s no sticky toffee pudding on their menu, for example, but there is a large, freshly made warm almond financier with luscious cherries and a pile of thick cream. There’s no blackboard, either, but a brief printed menu. Yes, there are chips on it (served with finest garlic aïoli, incidentally), but there are also unusual plates of delicious weirdness. I’ve eaten grilled leeks and gribiche many times, both separately and together, but at the Baring they’re arranged like an appetising, mustard-coloured, hazelnut-flecked alien life form: part lunch, part Magic Eye puzzle. I gazed at this visual static for some time, hoping to decipher a dolphin. We also ate a piece of very good charred mackerel in a fragrant, salmorejo-style sauce and flanked by courgette, while that quail shish came on a heap of excellent pickled red cabbage, with a small hill of yoghurt topped with a big puddle of pul biber chilli oil. 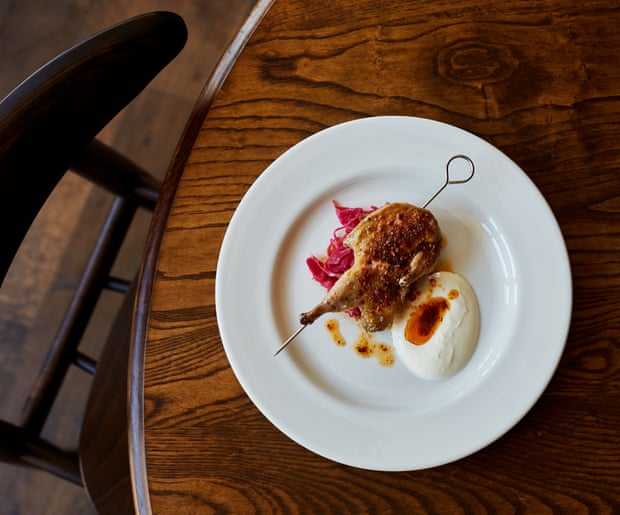 For mains, I chose ricotta gnudi – plump, meaningful balls of cheese and semolina. Whatever happened to semolina pudding? I loved it as a child, but now the only semolina I ever see is in Italian cookery, rather than in a Pyrex dish with jam and eaten while watching Willo The Wisp. Still, I can’t complain, because the Baring’s gnudi come in a pea-green sauce of broad beans, girolles and a generous grating of Italian hard cheese. Charles ordered the roast beef – well, it was a Sunday, after all – which turned out to be a thick slab of grilled Normandy rib with a huge yorkshire pudding and horseradish, with sides of enough roast potatoes to incapacitate a camel and buttery green cabbage strewn with fried breadcrumbs. 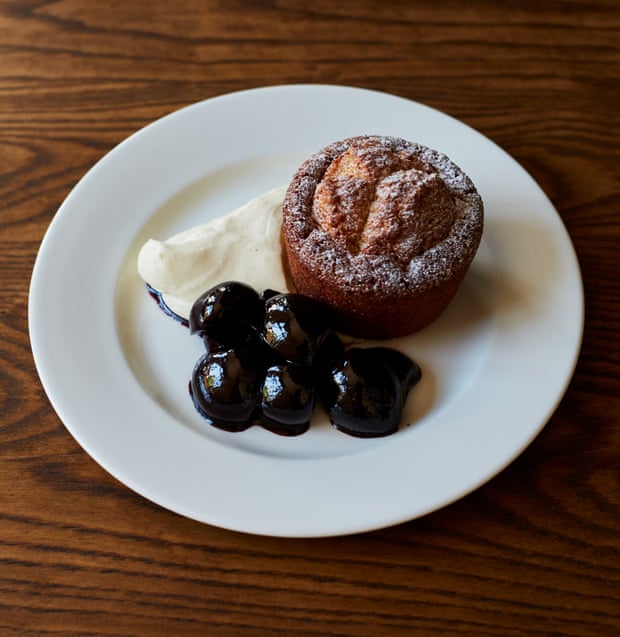 ‘Luscious’: The Baring’s almond financier with cherries and cream.

I drank a glass of non-alcoholic Blurred Vines’ Spark & Sharp “wine”, which was a funky, slightly vinegary little number that made a welcome change from the usual Peroni 0.0% currently available as an afterthought in most pubs. The Baring also offers a rotating choice of beers from breweries such as Burning Sky, Little Earth and Five Points, and aims to favour “spontaneous fermentation beers” – though they’ll also do you a cherry tequila sour if you ask nicely.

This will seem to some like “just another bloody north London gastropub”, but discerning eyes will regard it as a benchmark of where pub dining is heading. Stylish simplicity in the decor, scrubbed toilets, and imaginative cookery and ingredients; excellent staff, good beer, no £19 pre-made pulled pork burgers and puddings that are homemade and warm from an actual oven. I’ve seen the future, and it’s fine by me.

‘I didn’t intend to date my landlord’ | Readers’ Lives