A young girl killed in a house explosion in south London has been named locally as Sahara Salman.

Sahara, believed to have been four years old, died after a terraced house collapsed in Thornton Heath due to a fire caused by a gas leak.

Three other people were injured in the blast on Monday.

Dozens of firefighters were sent to the blaze in Galpin’s Road shortly after 7am, where up to eight homes had been damaged.

Around 80 properties were evacuated due to fears over residents’ safety and, on Wednesday, police said they are waiting for the gas to dissipate before allowing people to return.

Kutoya Kukanda, 50, and Delroy Simms, 62, who live nearby, said they helped rescue three children from the rubble.

Speaking at the scene, Mr Kukanda told Sky News that he was sleeping when he heard something that sounded like “a bomb”.

He opened his window to find a cloud of “smoke” and heard “people screaming”, so he ran outside in his shorts and saw the collapsed home.

Some residents said they had reported a strong gas smell two weeks ago, and others said they had been feeling dizzy and sick over the weekend before the fire.

The gas supply to the road has since been turned off and Merton Council is providing assistance to the more than 200 people affected. 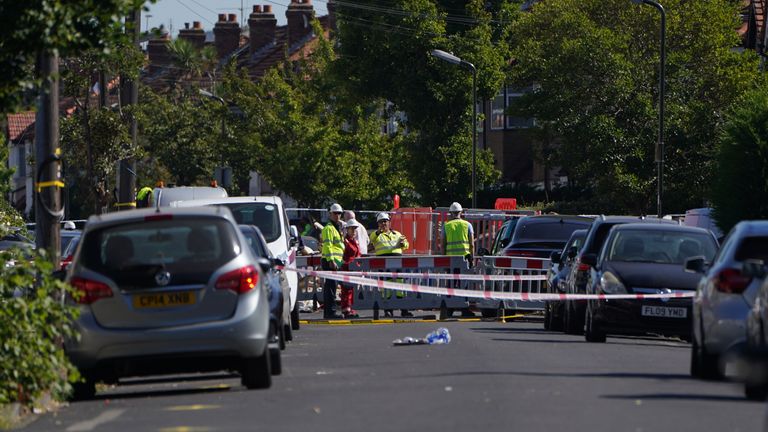 However, council leader Ross Garrod has said it “may take some days to stop” the leak, as the situation had not stabilised since the explosion.

Speaking on Tuesday, he added that the “thoughts of everyone remain with the family of the young girl who tragically lost her life”.

He also criticised insurance companies for “refusing basic accommodation” for those affected, calling it “unacceptable”.