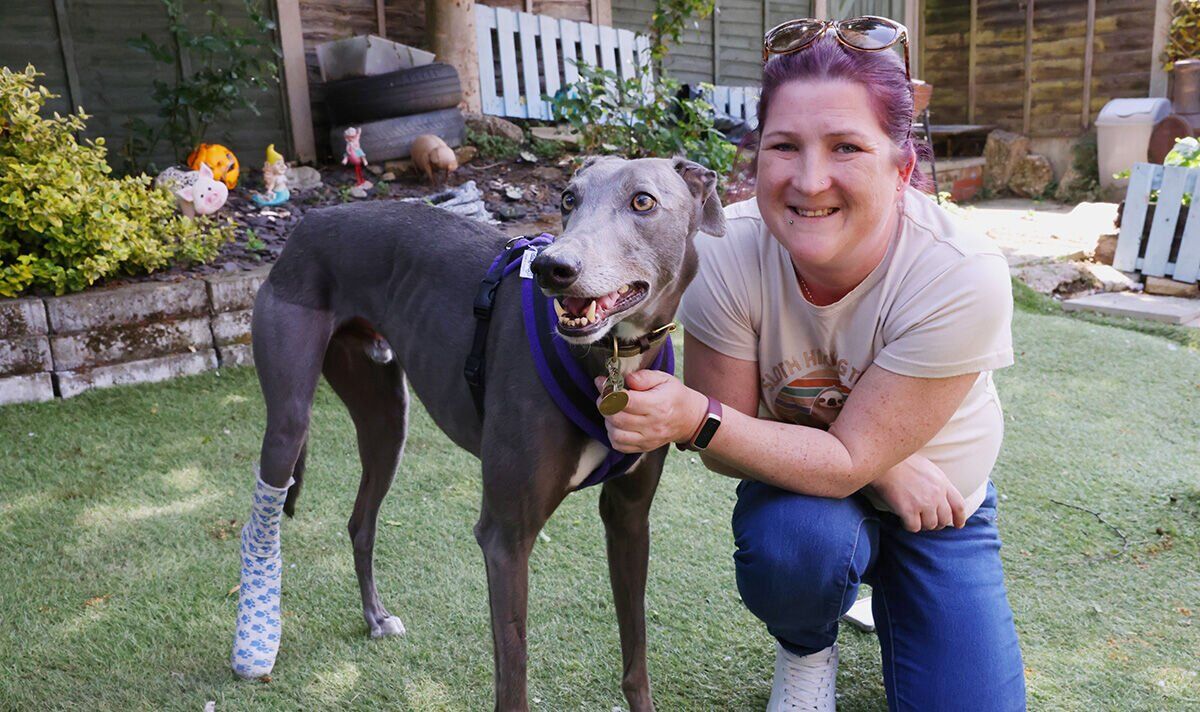 It appeared that three-year-old Patch had a new forever home, five months after he was first left at Kent Greyhound Rescue (KGR). However, he fell down “a hole or dip in the ground” while out for a walk and broke every bone in his paw, leaving his new owners with a bill they could not afford.

Patch, who had already been returned to the rescue once, was was moved into a temporary foster home to help him recover from the emergency surgery needed.

Two metal plates were inserted in his back right paw.

Vets fear that, if his recovery does not go to plan and he doesn’t get the care he needs, Patch may need to have his leg amputated.

KGR volunteer Emma Bartlett, 39, who has been fostering Patch since the ordeal, said the dog’s X-rays were “disturbing”.

The mum-of-three, from Maidstone, Kent, said: “There was talk of amputation but hopefully it won’t come to that.

“He’s got a splint so he’s not allowed out for walks. We have to take him out in the garden on a lead so he can use the toilet, but that’s it. It’ll be that way for six weeks.”

Emma said the dog’s injury was the worst the rescue had seen which was not a “racing or general health injury”.

She said: “It is not very common (for dogs to break bones in feet).

“We knew that he had been rehomed but was returned. He had been with the new owners for only a couple of weeks. All we know is that he was in a secure field and had been let off the lead and had fallen.

“We understand he had got his foot caught down a hole or a dip and ended up breaking every bone in it.

“There are slow signs of a recovery now but it will affect him, and may affect his confidence.”

Patch is spending most of his time confined to a cage while he recovers.

Another rescue volunteer, Hannah Wilson, said the £7,000 would pay for the surgery and recovery process.

She said: “Patch is a young dog, and KGR believes every effort should be made to help get Patch back on his feet and find a long-term loving home.”

Hannah, who fostered Patch prior to his most recent adoption, has started a GoFundMe campaign in order to crowdfund Patch’s vet bills.

She said: “We would be incredibly grateful if you could offer any support towards Patch’s veterinary bills. The charity could not exist without your help. KGR is a charity and completely relies on donations.”

To donate to the fundraiser, visit https://www.gofundme.com/f/help-patch-back-on-his-feet