Britain’s sweltering heatwave is set to peak on Friday with temperatures of up to 34C (93.2F).

The Met Office said London and potentially some spots in East Anglia are most likely to reach this high, making it the hottest day of the year so far.

Away from the capital and the South East, 27C to 30C (80.6F to 86F) is expected across most of England and Wales, making much of the UK hotter than parts of Jamaica and the Maldives.

The UK Health Security Agency (UKHSA) and the Met Office has issued a Level 3 Heat Health Alert for London, the East of England and the South East.

This alert follows the Level 2 issued on Tuesday and confirms the Met Office’s threshold temperatures for an alert will be reached in three regions from Friday.

But while England and Wales will bask in the heat on Friday, it will be cooler in Northern Ireland and Scotland which will both be affected by rain.

Click here to see the weather forecast in your area 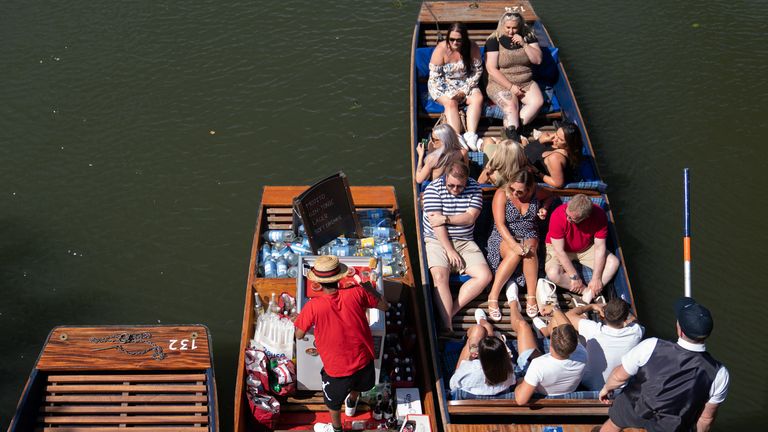 Image:
Drinks are served to people enjoying the hot weather as they punt along the River Cam in Cambridge

Britons have been flocking in their thousands to parks and beaches during the warm spell, partly driven by hot air from Spain and Portugal – with both countries seeing temperatures reach 40C (104F).

And since Friday will see no let-up for most of the UK, according to The Daily Telegraph, for the first time in its history, Royal Ascot will allow gentlemen to remove their ties.

Men attending the prestigious event are nearly always expected to wear full morning suits – complete with top hats, waistcoats and ties – but a spokesman said: “Racegoers will be expected to arrive compliant but can remove jackets and ties as the day goes on due to the high temperatures.”

Some have attributed the extreme heat to climate change.

Read more: Top tips for staying cool in the heatwave

Firefighters are also warning the severe temperatures lead to an increased risk of fires.

London Fire Brigade said it has already attended more than 1,430 grass and open land fires across the city this year.

The brigade’s assistant commissioner for fire safety, Charlie Pugsley, said: “We want people to enjoy the glorious weather and do so safely.

“Barbecuing on dry grass is reckless and can easily cause a really serious fire – damaging the immediate area and risking nearby properties.

“We’re also urging people to think twice about having barbecues on balconies.

“We’re not trying to take the fun out of the heatwave, but for the sake of our city – and of our firefighters who have to work in sweltering temperatures to tackle these blazes – we’d really like people to take our advice on board.

Firefighters are also warning residents not to risk their safety for a cooling swim.

The LFB said there were nine accidental drownings in London last year, making it the joint third-highest in the UK.

Britain’s highest recorded June UK temperature was 35.6C (96F) at Southampton Mayflower Park in June 1976, but forecasters do not expect that high to be surpassed this week.