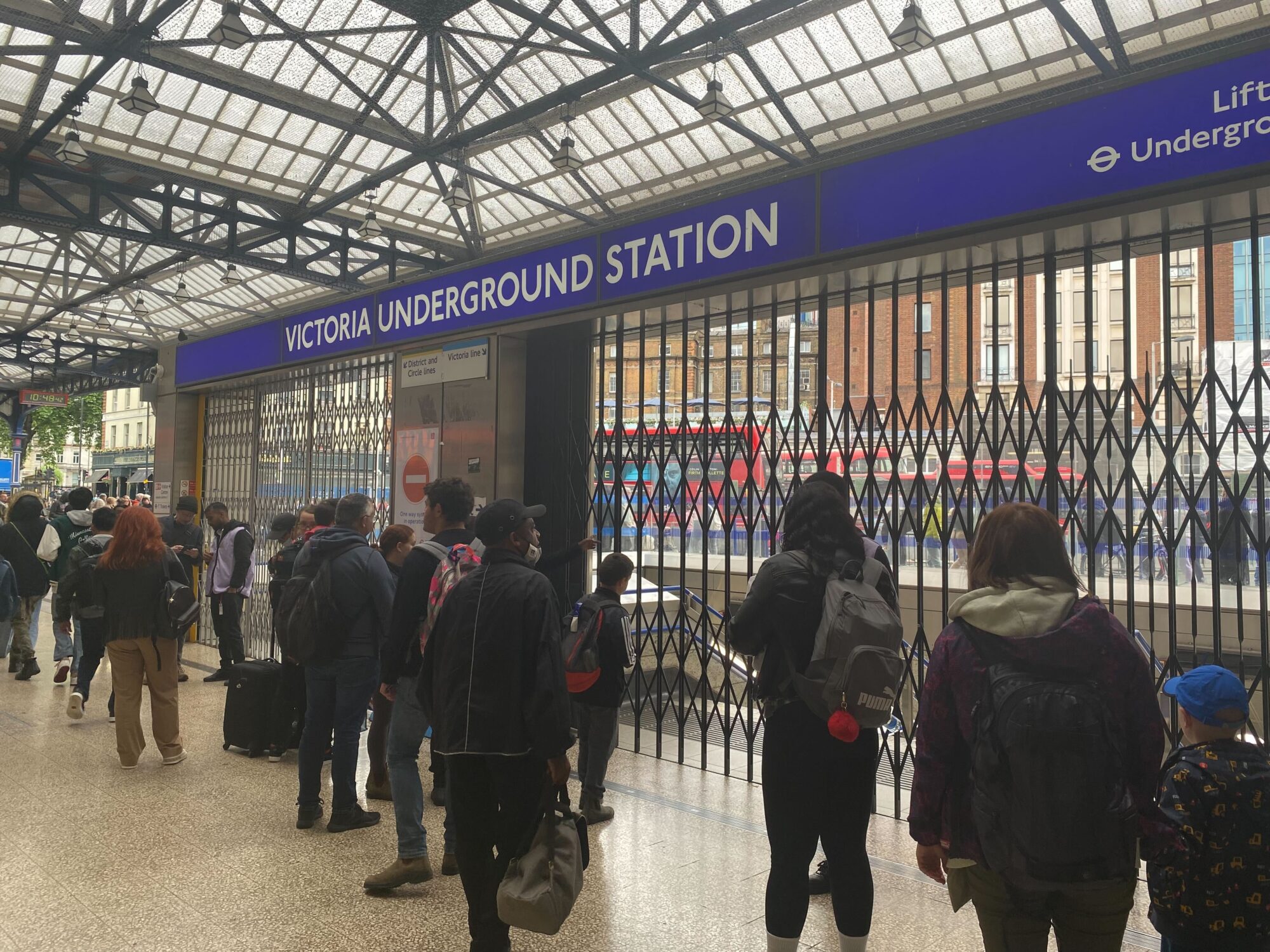 Commuters across London are facing chaos today as Tube staff stage a major 24-hour walkout that has shut down much of the network.

Transport for London (TfL) has closed Tube stations and lines due to reduced staffing levels from the strike action over jobs and pensions.

The RMT union called up to 4,000 station staff out on strike for 24 hours from the start of service today until 8am tomorrow (June 7). The union is protesting TfL plans to cut 600 jobs to reduce costs.

Both the Victoria line and Victoria Tube station are shut today, with commuters facing extra disruption after a freight train broke down near Balcombe earlier this morning.

Stuart Fancy, from Woolwich, said he was waiting at Victoria station for his friend who was late due to ongoing delays because of the fault.

He added that he supported the strikes. The 63-year-old said: “I support the strike – any strikes I support because look at what the government gets away with.”

He continued: “They work during Covid and get a pay rise that’s less than inflation which is really a pay cut, isn’t it, because everything’s gone up in the shops.” He added: “When I was young we used to have lots of strikes and now we don’t have any, and all the inequality has got worse.”

Kate Joy, 56, said she had arrived at Victoria station from Kent. “I’ve now got to get across to Bank for an appointment,” she said. “I’ve got eight miles to walk.” Vanessa Freitas, 42, said she had been travelling for two hours from Streatham and still needed to get the bus to Paddington.

The strike comes on the first working day after the Platinum Jubilee Bank Holiday weekend. Joan, who did not wish to give her surname, said: “I’ve come in from America to see the Queen for three weeks.”

She said she had been “standing for hours” after travelling from Warwick Road at 6.15am by bus to Victoria because she had to go to the passport office, close to the station, and Earl’s Court was closed. She added: “Now I’m standing here figuring out how to get home.”

Shirley, who did not wish to give her surname, was travelling with her dog and was concerned about how he would fit onto a packed bus. She said: “There’s no trains, the bus is so full up. It’s like squeezing in, so that’s a big problem […] someone stepping on him.”

She added: “It’s really difficult and I’m waiting for my friend as well and she can’t get the train so that’s taking ages as well, so it’s a disaster because I need to wait”.

TfL has urged people who must travel today to do so between 8am and 6pm. Buses and other TfL services, including DLR, London Overground and trams, are not affected by the strike and will be operating, but are expected to be busier than normal. The newly opened Elizabeth line will run until 11pm.