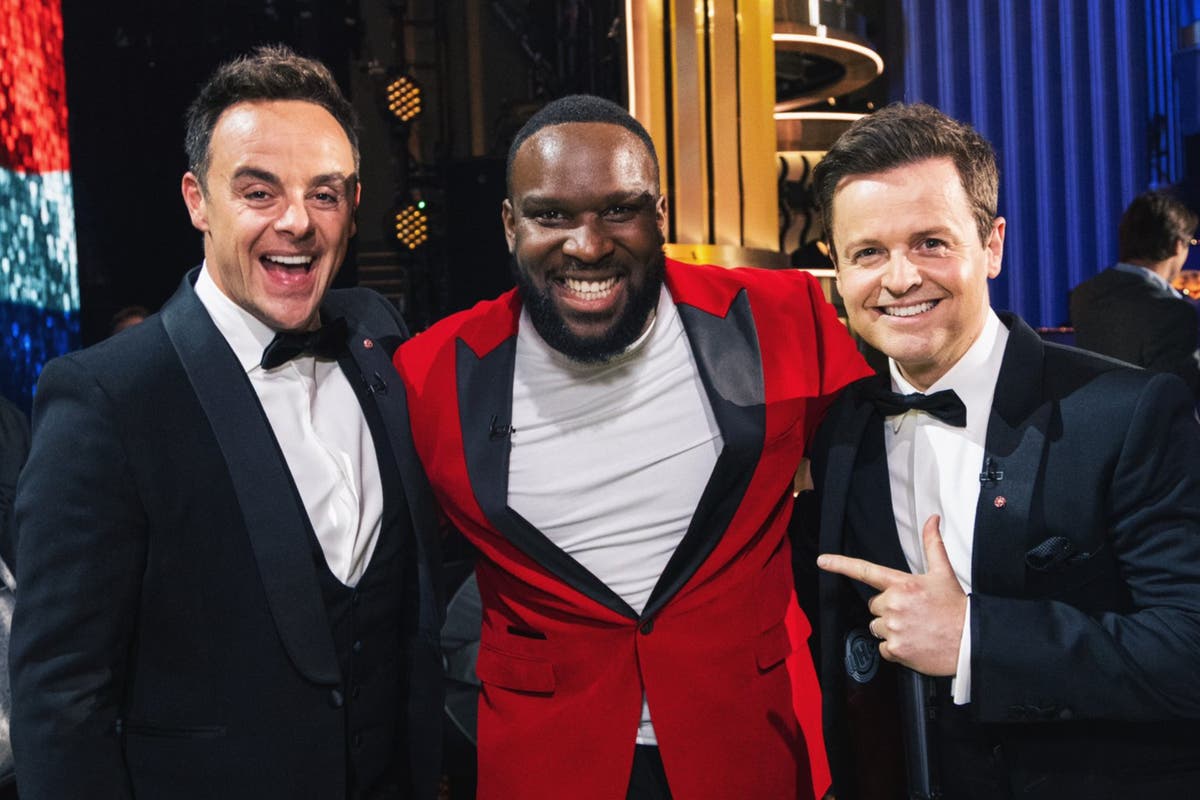 omedian Axel Blake said “words can’t even explain” his emotions after being crowned the winner of Britain’s Got Talent 2022 on Sunday night.

The 33-year-old property maintenance manager from west London, who was Simon Cowell’s golden buzzer choice, has scooped the £250,000 prize, as well as a spot on the bill at the Royal Variety Performance.

Speaking following his win, Blake said: “Words can’t even explain. I am shaking. Thank you everyone for voting for me. It means the world to me.”

The comedian delivered another witty comedy routine during the talent competition’s final, including joking that he had heard a member of the public mistaking him for the rapper Stormzy, but with added weight.

He also joked about how the intensity of cyclists in London made him have to give up the sport, but that he still keeps up his dance moves, which he demonstrated on stage.

Cowell said that he was emotional for Blake following the routine, adding: “I really believe that we have discovered a star.”

David Walliams added that this was a “winning performance” and that he believed he would “storm” at the Royal Variety Performance.

Ventriloquist Leahey narrowly missed out on the title after opening the show with a routine which left the audience in fits of laughter.

The 13-year-old from St Helens, Merseyside, poked fun at Cowell during the performance, with the chicken joking the judge might eat him for Sunday lunch.

Amanda Holden said the routine reduced her to tears as she described the performance as “flawless”.

While Ball had the audience and judges on their feet after he delivered a powerful rendition of I (Who Have Nothing) by Tom Jones.

Holden described the performance by the 24-year-old high school teacher from West Sussex as “unbelievable” and “unforgettable”.

Also among the finalists was rapper and pianist duo Flintz and T4ylor who delivered a moving original song about their journey of connecting on social media and getting to the final of the talent show.

The rapper Flintz, 22, was offered words of support from the judges after he got emotional and lost his lyrics momentarily.

Alesha Dixon, who awarded the act her golden buzzer during the audition round, told him that what they had achieved in the show will outweigh any mistake he made during the performance.

Singer Loren Allred also battled for the crown with a powerful rendition of an original song that she wrote after her audition, titled Last Thing I’ll Ever Need.

The 32-year-old from New York, who was the voice behind the track Never Enough from The Greatest Showman, was praised by Holden for breaking away from what she is known for and showing her “heart and soul” in the performance.

Comedian Eva Abley, 14, who has cerebral palsy, kept the crowd laughing with her stand-up routine where she joked she had been sacked as Boris Johnson’s hairdresser as she was apparently “too good”.

She added that she was now Cowell’s hairdresser, noting that his parties featuring Champagne and caviar were “way better” than the Prime Minister’s “cheese and wine” affairs.

The show also saw Amber and The Dancing Collies make a strong comeback after they were chosen by the judges to return as the “wildcard act” out of all the third place acts who did not make it from the semi-finals.

The dog trainer from the Netherlands and her canine sidekick Nymeria delivered a Grease-themed routine which only featured one dog this time after Cowell said that their semi-final performance with two dogs was too much.

The group of boys, aged between 10 and 12 from across the UK, performed synchronised backflips, splits and leaps as smoke pooled across the stage and glitter rained down.

While seven-year-old Aneeshwar Kunchala, from Warrington, continued his passionate message to protect the environment with another inspiring poem.

He got momentarily nervous at the beginning but he carried on confidently after cheers of support from the audience.

Ben Nickless, 40, entertained with his uncanny impersonations of famous faces which included poking fun at hosts Ant and Dec and their many presenting gigs.

And busker Maxwell Thorpe, 32, gave a powerful rendition of the classic operatic song Caruso, which Walliams said he was “hypnotised” by.

The finale, held at the Apollo Theatre in London, also featured a performance from the West End cast of Sister Act: The Musical.