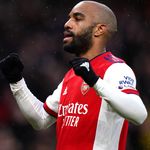 Alexandre Lacazette will leave Arsenal when his contract expires at the end of June, the north London club have confirmed.

However, the goals dried up a little for Lacazette this season – he scored six in 36 games – and he and Arsenal have now decided to go their separate ways.

A statement from manager Mikel Arteta posted on the club’s official website said: “Laca has been a fantastic player for us. He’s been a real leader on and off the pitch and has been a very important influence to our younger players.

“His commitment with us has been exceptional and we wish him and his family success and happiness.”

Technical director Edu added: “A big thank you to Laca from everyone at Arsenal. He’s been really important for us. “He will always be part of the Arsenal family and we wish him well for everything in the future.”

The France international made his name at Lyon, where he found the net 129 times, after coming through the academy at the French giants and he has been linked with a move back to the Groupama Stadium this summer.

Which positions are Arsenal targeting?

Arsenal are primed to have another busy summer. Missing out on Champions League football may affect spending plans, but there are areas Edu and Mikel Arteta will want to strengthen.

Pierre-Emerick Aubameyang’s departure in the last transfer window means Arsenal are definitely in the market for a striker. The Gunners’ strike force is boosted by Eddie Nketiah being on the verge of signing a new contract this summer.

With Alexandre Lacazette leaving, expect one or two new players to arrive up front. Folarin Balogun has had a loan spell with Middlesbrough – expect him to return to fight for his place.

Arsenal are likely to try and get money for ‘keeper Bernd Leno. His contract is up next summer and the club have brought in USA international Matt Turner.

Arsenal were the biggest spenders in the Premier League last summer and Arteta will be backed again. Adding quality and depth is crucial given they will be in four competitions next season.

Where should your team strengthen?

The Gunners’ most pressing need for next season is in attack. When your leading marksman has the same number of goals as bottom-placed Norwich, you know there is a problem.

The issue is not in creating chances, the problem is in taking them. Arsenal ranked fourth for shots, shots on target and expected goals (xG) this season, but ranked 11th for shot conversion.

This disparity places Arteta’s side 15th for xG differential, which measures the difference between goals and xG. A low xG differential suggests you are missing high-quality chances – only Brighton, Leeds and the three relegated teams had a lower xG differential than Arsenal.

The main culprit in this regard was Alexandre Lacazette, who scored just two non-penalty goals from 46 shots and an xG return of 6.84. Only Brentford’s Bryan Mbuemo underperformed his xG by a bigger margin this season.