When chefs Andrew Clarke and Daniel Watkins announced their latest venture together, in London’s Dalston, it was described as: “More than just a restaurant.” Really? What is it then? An amusement park? A fetish club? A branch of Ikea? One of those might prove handy. “It’s a cult.” Oh my. In fairness, if you were hunting for a London cook to head up a raging, devoted religious movement, Clarke would fit the bill. He has a foot-long beard that can house small mammals or be plaited into viable rope, and so many tattoos that he’s become a walking secular challenger to the Sistine Chapel ceiling.

Or perhaps not. While he might make a good figurehead, I know him to be a thoughtful chap, who probably wouldn’t be comfortable with all the coercive control a true cult demands. He has been involved with significant projects tackling mental health issues in and around the hospitality business, and has talked in a compelling way about his own challenges.

So take the bombast of the name Acme Fire Cult with a pinch of quality, artisanal sea salt. It really isn’t more than a restaurant. There are tables and chairs, both in the functional dining room and on the rugged deck outside, where heat lamps dangle. There are menus and waiters. You order and they bring, from the wood-fired grill outside, their only kitchen. It’s an interesting development in the live-fire cookery movement, which Clarke helped popularise through the much glossier St Leonard’s restaurant he ran with Jackson Boxer in Shoreditch. For obvious reasons to do with the caveman imagery of burning logs and woolly mammoths, live fire cookery has associations with hunks of meat. If you have the time, it can be a good way to cook the cheaper cuts from corners of the animal that, having worked harder, have more connective tissue, and need longer to break down.

There is some of that on this menu, developed during a series of pop-ups over the past couple of years. For the most part, however, it is thrillingly, impressively vegetable led, part of a self-declared determination to get away from the whole “dude food” culture around fire and smoke. For this reason, I want it to be so much more than a cult, because cults tend to implode quickly under the weight of their own filthy impropriety. This needs to endure. Acme is also a collaboration with 40ft Brewery with whom they share a space, in a rough old yard next to the Dusty Knuckle Bakery, the wellspring for much of north London’s overly developed sourdough habit. The brewery doesn’t just provide beers to go with the food. By-products from brewing, such as yeast and spent grains, are used to make ferments and sauces. 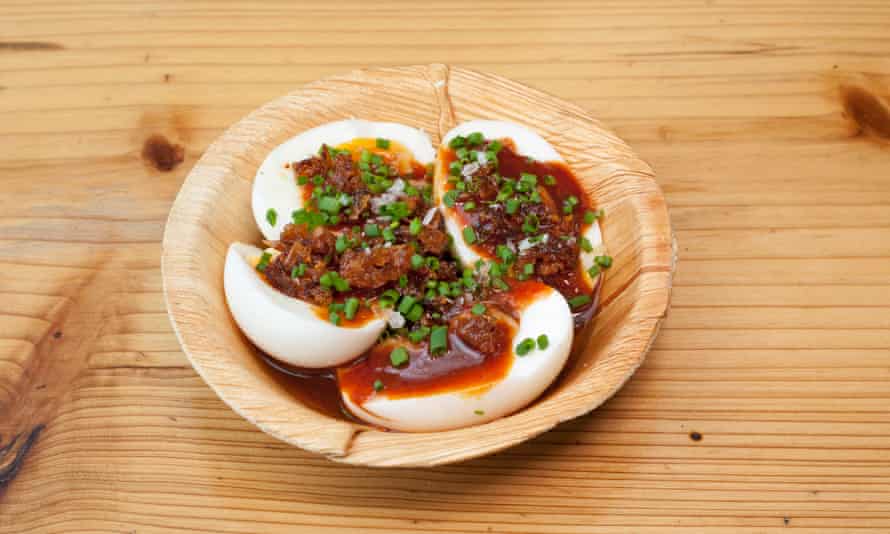 ‘I could do damage to successive servings of these’: devilled eggs. Photograph: Sophia Evans/The Observer

So far, so achingly “grim up north London”, for the Private Eye readers among you. Statement of the obvious: none of this would be important if the food wasn’t good. A great beard, tats and leaping flames do not dinner make. Happily, much of it is good. We start with their devilled eggs. Mary Berry would, I think, give these a basilisk stare. The traditional 1960s stalwart involved the boiled eggs being halved, the yolks removed, mixed with mayo and cayenne pepper and so on, whipped and returned. Here, the eggs have been cooked so the yolks have reached a perfect jellied state. They have then been drenched in a sweet-sour tamarind-like sauce and scattered with crisply fried onions. Even though I wished the devil to have more of a voice, a theme in a number of dishes which shy away from chilli heat, I could do damage to successive servings of these. They also make their own Bombay mix. It’s rich in toasted peanuts and cashews, which are usually in short supply for cost reasons.

There is a certain amount of what could come across as innovation for its own sake among the small plates, except it all works. Leeks are grilled until the point of surrender, when they are sweet and soft. They are then served at room temperature with their own version of romesco sauce, in which the ground almonds have been substituted with ground pistachios. It’s a study in verdant shades of green. There’s a welcome acidity to the grainy romesco. New potatoes have been smoked and are lubricated by a tahini mayo and a nutty chilli oil or rayu, made with grains from the brewery. Grilled cauliflower florets come in a ripe, buttery Indian-accented mess of a sauce under ribbons of pickled onion. 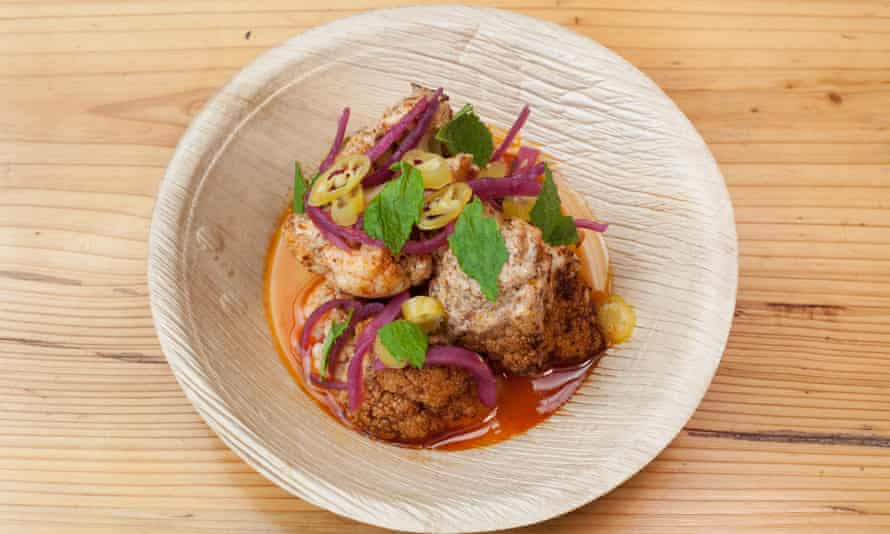 Meat and fish do not appear on the menu until the large plates. There’s mutton merguez with a wild garlic salsa verde, the ingredients for which I pray have not been harvested from the fox-sprayed canal verges of Dalston. There’s a Tamworth pork chop and a whole butterflied mackerel. We order the ox cheek. It’s the least whelming of dishes. The mustard greens have heft and there’s a powerful umami-tastic ancho chilli koji condiment. But the cheek simply hasn’t spent long enough on the grill. It fights back against the knife and fork. It almost wins.

So much better is the hearth vegetable plate, a fabulous collection of beefy roasted tomatoes, courgettes and fennel, with white beans and squash purées, dressed with another big old salsa verde. This singular £14 dish makes the argument for the whole venture. It is a demonstration of the virtuous interplay of the best vegetables and the most acutely managed indirect heat and smoke. There is just one dessert tonight: a deep, dark chocolate ganache topped by hazelnuts and a beer molasses. It’s impressively powerful, but could have done with a soothing dollop of chilled whipped cream. 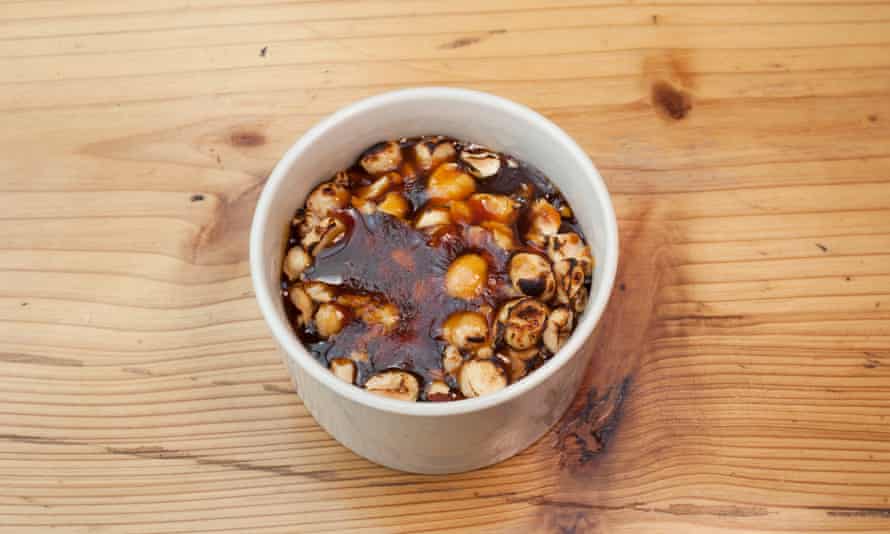 It’s clear they want you to get deeply stuck into the brewery’s offering with this food: into beers with names like Dalston Sunset and Disco Pils, all at £5 or £6 a pint. There are only half a dozen wines, and the cheapest white, a dry Tokaj, is £38 a bottle, which is unfriendly. It’s also at odds with the reasonable food pricing. Perhaps they simply don’t care much about wine drinkers – which is, I suppose, fair enough. Then again, I came here for dinner, rather than for an act of unquestioning cultist worship. And dinner, a really engaging one, is what they gave me. I may not be a devout follower of the cult. I may not be on my knees before the blessed grill. But I do have faith.

The onward march of top steak continues. Hawksmoor have announced that, following openings in Manchester, Edinburgh and New York, they are now expanding into Liverpool. The steakhouse group has always utilised grand buildings with history and the same is true again. Hawksmoor Liverpool will be located inside the Grade II-listed India Building on the corner of Brunswick and Fenwick Streets and will open later this year. ‘It’s an amazing site,’ co-founder Will Beckett has said. ‘We’re really excited to do it justice’ (thehawksmoor.com).

The ever-interesting chef Jay Morjaria is on to his next project. Having finished his Korean-inspired residency JAE at Untitled bar in London’s Dalston in February, he has now opened at the Shelter Hall food market on Brighton’s seafront. Tiger and Rabbit offers Morjaria’s take on Korean barbecue, with rice, lettuce wraps and appropriate condiments, including samjang aioli and kimchi (shelterhall.co.uk).

And while there are new openings, there’s also bleak news. According to accountancy firm Price Bailey, more than 1,300 British restaurant became insolvent in the year to the end of March 2022. This was a significant rise on the previous 12 months, when 926 restaurants went bust. The increase has been attributed to the end of the government’s various programmes to support the industry through the pandemic.