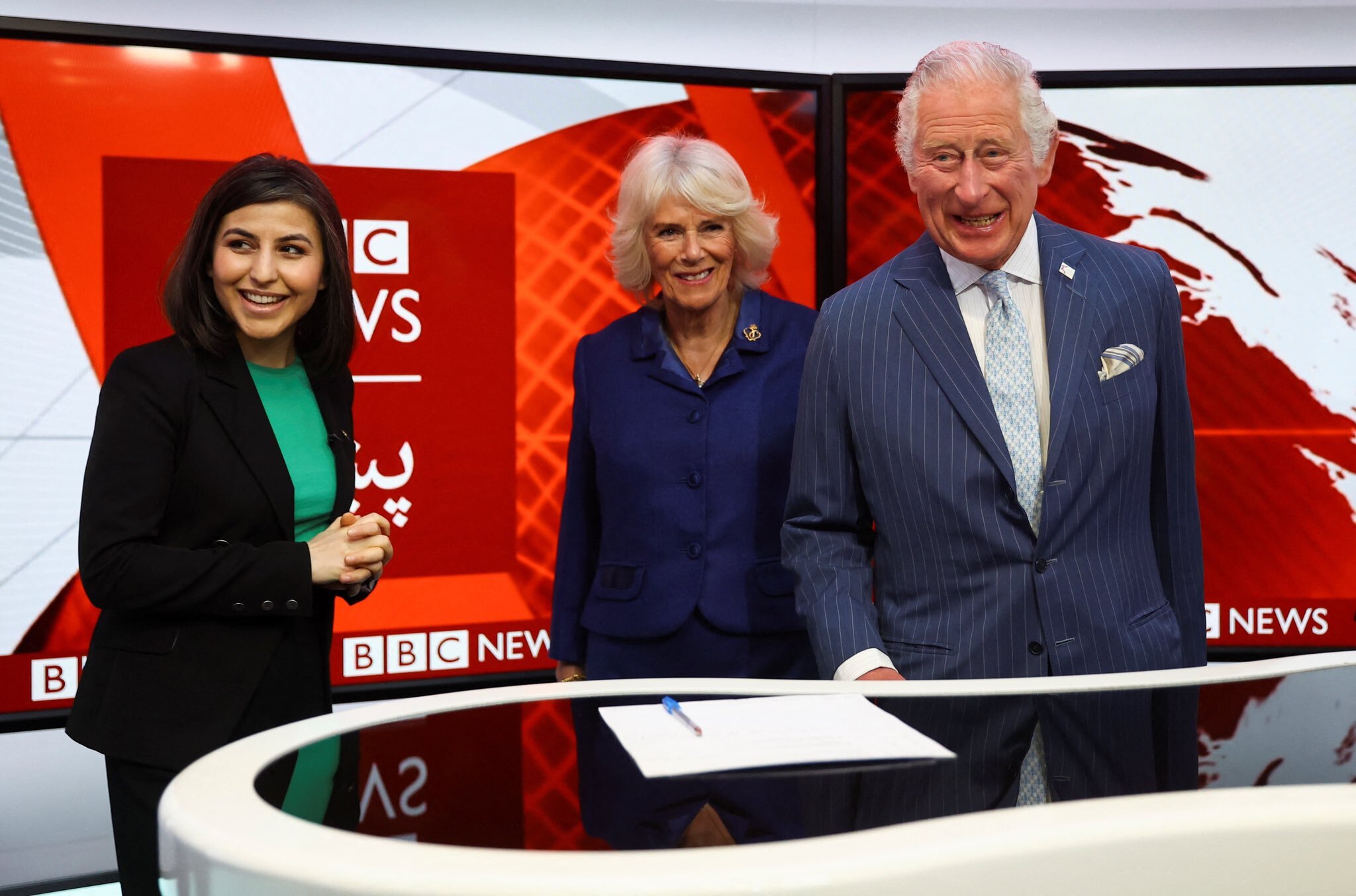 The Prince of Wales and the Duchess of Cornwall paid a visit to the BBC World Service earlier this week to celebrate its 90th anniversary and learn more about its operations in Ukraine, Russia, and Afghanistan.

During their tour of the studios, Prince Charles complimented the BBC World Services team for reporting “in the most difficult of circumstances” and revealed that he’d recently watched a news broadcast featuring Lyse Doucet and Clive Myrie “shivering on the roofs” while reporting live from Kyiv.

Prince Charles and Camilla were greeted upon arrival by the BBC’s Director-General, Tim Davie, and the BBC World Service Director, Liliane Landor. Davie said, “As the BBC World Service turns 90, it’s fantastic to see the work of our colleagues being recognised, especially at a time when accurate and impartial journalism is needed now more than ever.”

The royal couple received a tour of studio prepping for a daily Pashto news bulletin for BBC News Afghanistan; visited with a live link-up with journalists from BBC World Ukraine reporting live from Poland and Moscow; and met with staff who had recently evacuated from Afghanistan.

In a short speech, Prince Charles said, “I’m full of admiration for everything you do and your colleagues on the ground, and those of you who have had to escape from other countries, all too frequently nowadays, from all this depressing amount of conflict around the world.”

Next, Prince Charles paid a visit to the West London Welcome Centre to meet with refugees, staff and volunteers and learn more about the vital work the centre does.

The West London Welcome supports 650 people from over 50 nationalities and lately has been supporting refugees who are arriving from Afghanistan and Ukraine with housing and legal issues. The centre works to reduce isolation and build inclusion and confidence for people new to the United Kingdom.

During his visit, Prince Charles met with personnel, watched a cooking class, and received a tour of the facilities. He also spoke of the “need to do something” to support asylum seekers coming to the United Kingdom.

During his visit, Prince Charles learned how the charity has helped over 20,000 people flee the conflict in Ukraine and spoke with three women who escaped Ukraine.

“All of us at World Jewish Relief were bowled over by the visit of His Royal Highness The Prince of Wales to our humble offices in Northwest London,” said the charity’s chief executive Paul Anticoni. “His interest, engagement, and proactive leadership in all aspects of our work is inspiring. We recognise that our Royal Patron’s celebration of our work is testament to all parts of this incredible organisation—our wonderful supporters, our brave programme participants, my hardworking team and Trustees and all our partners.”

Now it’s Berkxit! William and Kate to move their family to Berkshire as Duke of Cambridge turns 40