Traffic has been brought to a standstill around four of London’s busiest bridges after Extinction Rebellion activists formed human barricades at their entrances.

Eco protesters lined the roads outside Blackfriars, Westminster, Waterloo and Lambeth bridges ahead of the Friday afternoon rush hour.

The A301 over Waterloo Bridge was said to be blocked southbound, although traffic was initially coping.

The activists began by bringing the roundabout at Hyde Park Corner to a standstill earlier on Friday before fanning out and moving south to the bridges.

Meanwhile, a large crowd of protesters gathered outside Charing Cross police station to demand the release of an activist being detained there.

Emma Smart is believed to have been arrested for gluing her hand to a window and has reportedly been denied bail.

A spokesperson for the Metropolitan Police said: ‘We are aware of a number of demonstrations happening today. 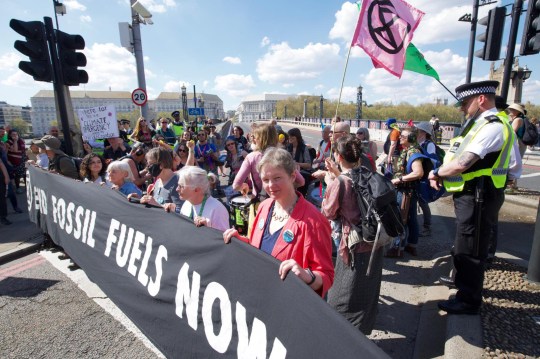 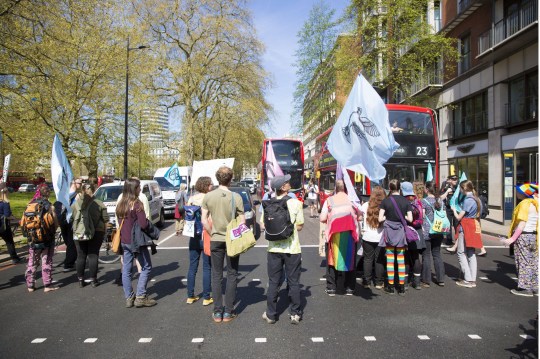 THe group are calling for an end to Britain’s use of fossil fuels (Picture: REX) 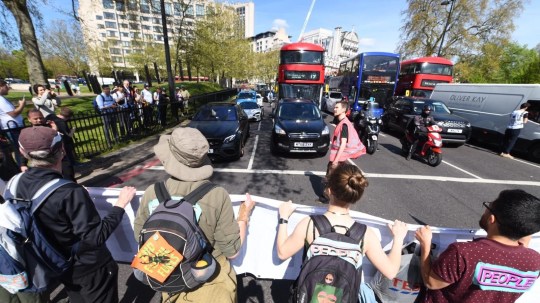 The roundabout at Hyde Park Corner also appeared to have been blocked (Picture: Extinction Rebellion) 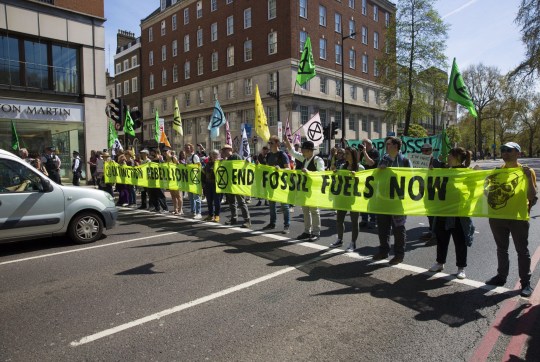 ‘We are seeing pockets of protest which are causing delays and disruption across central London.

‘A policing operation is in place and officers are on scene and working to manage the impact.’

A spokesperson said XR is ‘calling for an immediate end to new fossil fuel investments as part of the Rebellion and ongoing actions by Just Stop Oil continue’.

It marks exactly three years since the start of XR’s first major mass demonstration, which brought pandemonium across central London in April 2019. 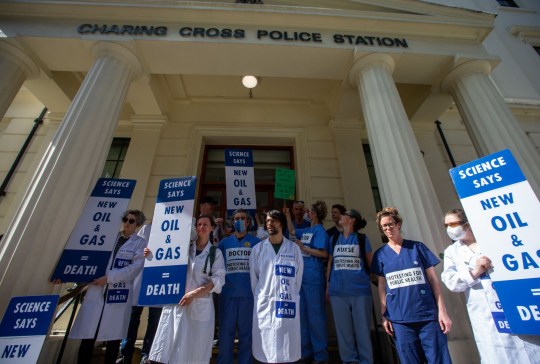 Protesters also gathered outside a police station where an activist is being held (Picture: Rex)

Friday’s disruption is not expected to last as long, as each bridge appears to be occupied by just a few dozen protesters who had not set up obstacles or camping gear.

The impact is also likely to be reduced by lower levels of road use due to the bank holiday.

The activists said they are continuing to let emergency services through their barricades.

They came in for heavy criticism in previous years over incidents where ambulances were delayed en route to callouts.

In a later tweet, the activists added: ‘As long as our government fails to #ActNow on the #ClimateCrisis disregarding expert advice, licensing more drilling for oil & gas, locking up scientists, we have no choice but to disrupt.’