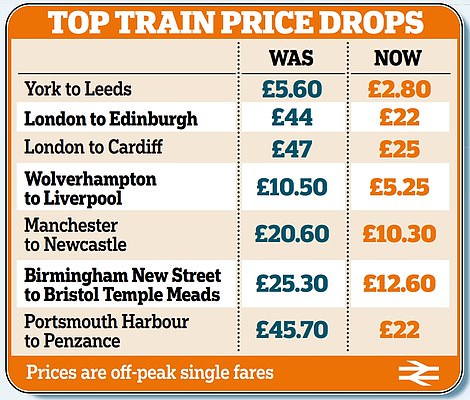 Train ticket prices are set to be slashed by as much as half as the Government looks to address cost of living pressures with cheaper travel in April and May, ministers have revealed.

In what is being dubbed the Great British Rail Sale, Transport Secretary Grant Shapps said more than one million train tickets would be reduced this spring. He hopes the move will help hard-pressed households – contending with rising bills and soaring inflation – to afford trips across the UK and boost tourism.

But the Campaign for Better Transport said the initiative was only a ‘first step’ and called for an ‘end to massive annual fare rises’, while Labour pointed out that the sale would end just before the May half-term holidays and therefore many families would not benefit.

It has also been claimed that only 1 per cent of all journeys taken are likely to be affected by the sale, and Trades Union Congress general secretary Frances O’Grady said: ‘This headline grabbing gimmick won’t help commuters at all … Working people need affordable rail travel every day.’

The sale, said to be the first of its kind due to all rail operators taking part, is set to bring some Manchester to Newcastle journeys down to just over £10. Seats on some London to Edinburgh services will fall from £44 to £22.

Tickets will be available on selected advance fares from 10am this morning, with passengers able to purchase them from the National Rail website, and the best savings are likely to be on inter-city travel at quiet times.

The Government continues to face a battle to get people back on trains – with rail use last month only averaging 75 per cent of pre-pandemic levels, while car usage has now nearly completely recovered at 93 per cent. 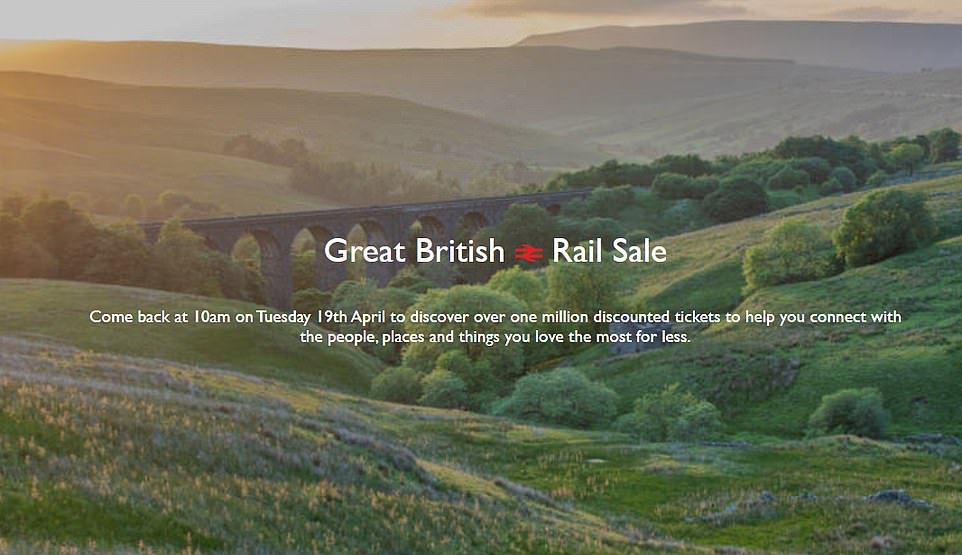 Hailing the end of pandemic travel restrictions, Mr Shapps said: ‘We’ve had two years of living life virtually. It is time to get real and visit our beautiful country.’

He added: ‘There’s no better time to visit friends, family or just explore our great country, so book your tickets today.’

Which lines will half-price tickets be available on?

There will also be separate sales launched today by:

The offer does not include travel on these networks:

Passengers will be eligible to travel for less on off-peak fares between April 25 and May 27.

Discounted tickets will go on sale from today.

Officials said offering half-price rail tickets was ‘one of the ways’ the Government was helping to support struggling families.

As for refunds, ‘Great British Rail Sale’ tickets are valid only on the date and train shown on the ticket and seat reservation and are non-refundable.

Passengers can however change the time or date of travel before departure of the first reserved train – and any difference in fare and an administration fee will be payable prior to travel.

In addition, if the customer’s ticket retailer is participating in the ‘Book with Confidence’ scheme, then they can amend when they travel fee free up until 6pm the day before they travel.

The move comes as Boris Johnson returns from the Easter break promising a renewed focus on combating the cost of living crisis.

Inflation has reached 7 per cent – a 30-year high – while ministers have been warned that average energy bills could rise to as much as £5,000 a year if the war in Ukraine continues to disrupt gas supplies.

Yesterday it emerged that more than one million parents fear they will have to visit a food bank in the next three months as supermarket prices soar.

Jacqueline Starr, chief executive of the Rail Delivery Group, said: ‘We want everyone to be able to benefit from travelling by train because it’s more than just a journey; it’s a way to connect everyone to the people, places and things they love.

‘As part of the Great British Rail Sale customers will enjoy over one million discounted tickets, so they can explore some of the fantastic locations that are accessible by rail.’

The Department for Transport said reforms to the rail sector through the so-called Williams-Shapps plan for rail will mean that network-wide sales of tickets should be able to take place more easily in the future.

And Norman Baker, from the Campaign for Better Transport, said: ‘Trains are a great way to travel – good for the economy, good for social mobility and good for the environment – but passenger numbers have to date not fully recovered to their pre-Covid levels.

‘This is an excellent way to win back those passengers and remind them that our trains are safe, clean and for a short period at least much cheaper too. 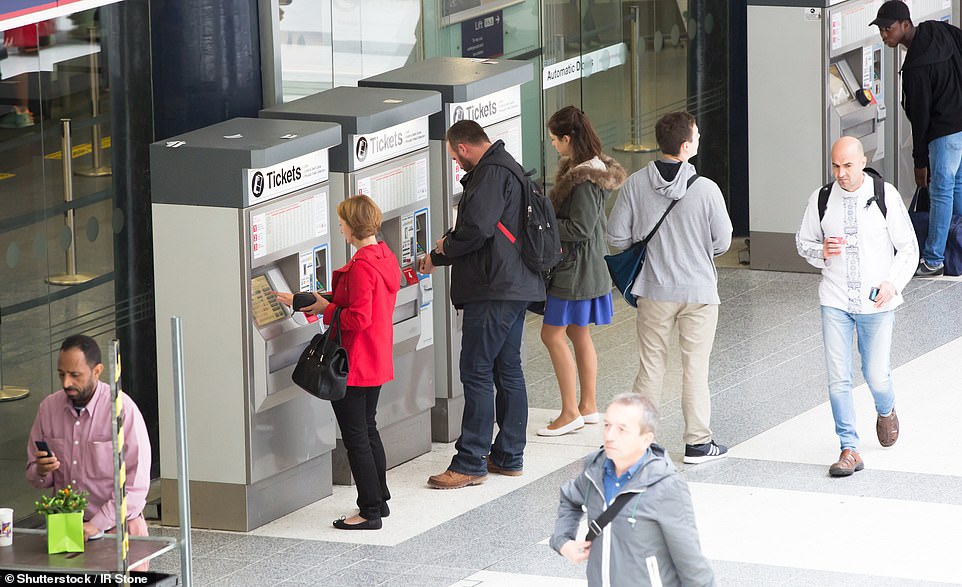 The sale, said to be the first of its kind due to all rail operators taking part, is expected to bring some Manchester to Newcastle journeys down to a little over £10. Meanwhile seats on some London to Edinburgh services will be slashed from £44 to £22 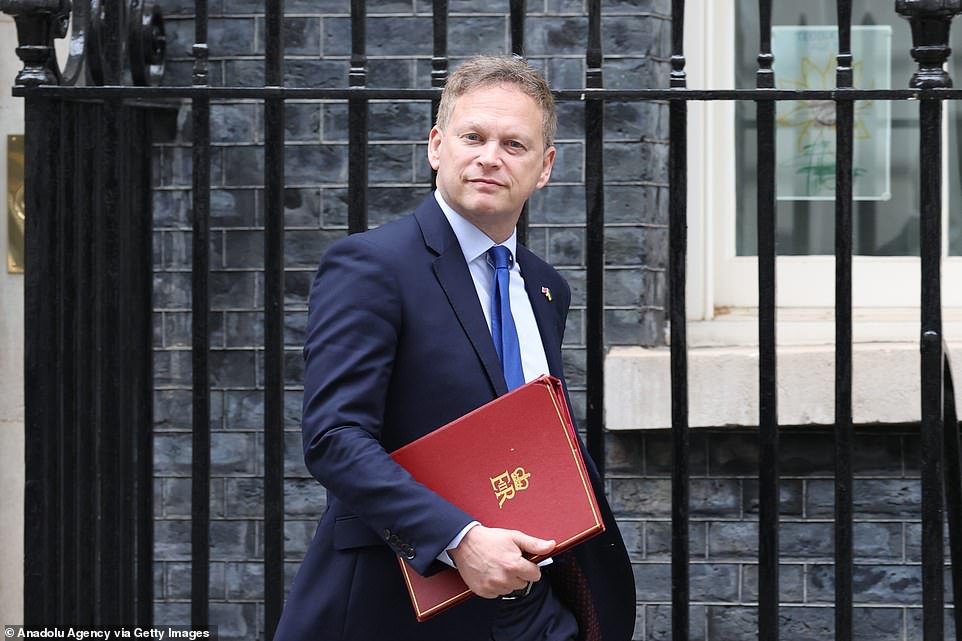 ‘We have been pushing for action to get people back on trains so are delighted the government has responded positively. 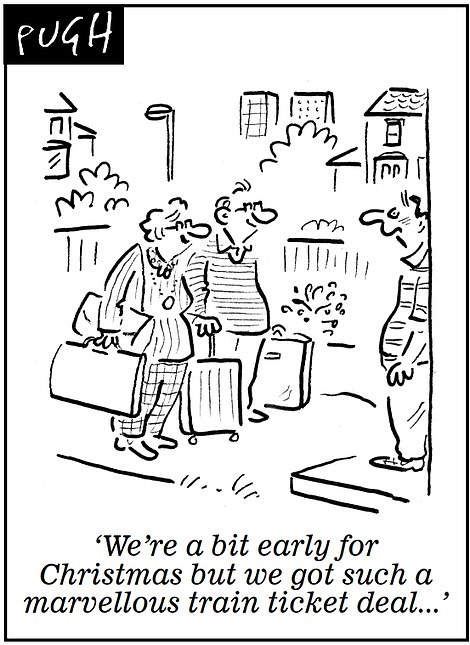 ‘I hope the take-up of this offer will attract people onto trains and actually end up generating extra money for the government.

‘It can show the Treasury that the way to increase income is to cut fares, not keep ratcheting them up and driving people off the railway. This initiative, though very welcome, is but a first step.’

In addition to today’s announcement, the organisation is calling for an ‘end to massive annual fare rises’; a ‘wholesale rejigging of fares and ticketing to respond to new travelling patterns’; ‘much better use of public money by Network Rail (and subsequently Great British Railways) to get more improvements for the same money’; ‘far fewer engineering works at times people want to travel’ and ‘better timetables to eliminate padding and poor connections’.

Labour’s shadow transport secretary Louise Haigh said the discounts this spring will be ‘small comfort to passengers’ after years of ‘soaring fares’.

‘A decade of brutal Tory fare hikes have priced people off our railways,’ she said.

‘This temporary respite will be small comfort to passengers who had thousands taken out of their pockets from soaring fares since 2010.

‘And the decision to end the sale just before half-term will mean many families face the same punishing costs over the holidays.

‘Working people are facing the worst cost-of-living crisis in decades, and the Conservatives have chosen to hike up taxes and reject a windfall tax on the soaring profits of oil and gas giants.

‘Labour would help working people – with a fully-funded plan to cut up to £600 off of household bills.’