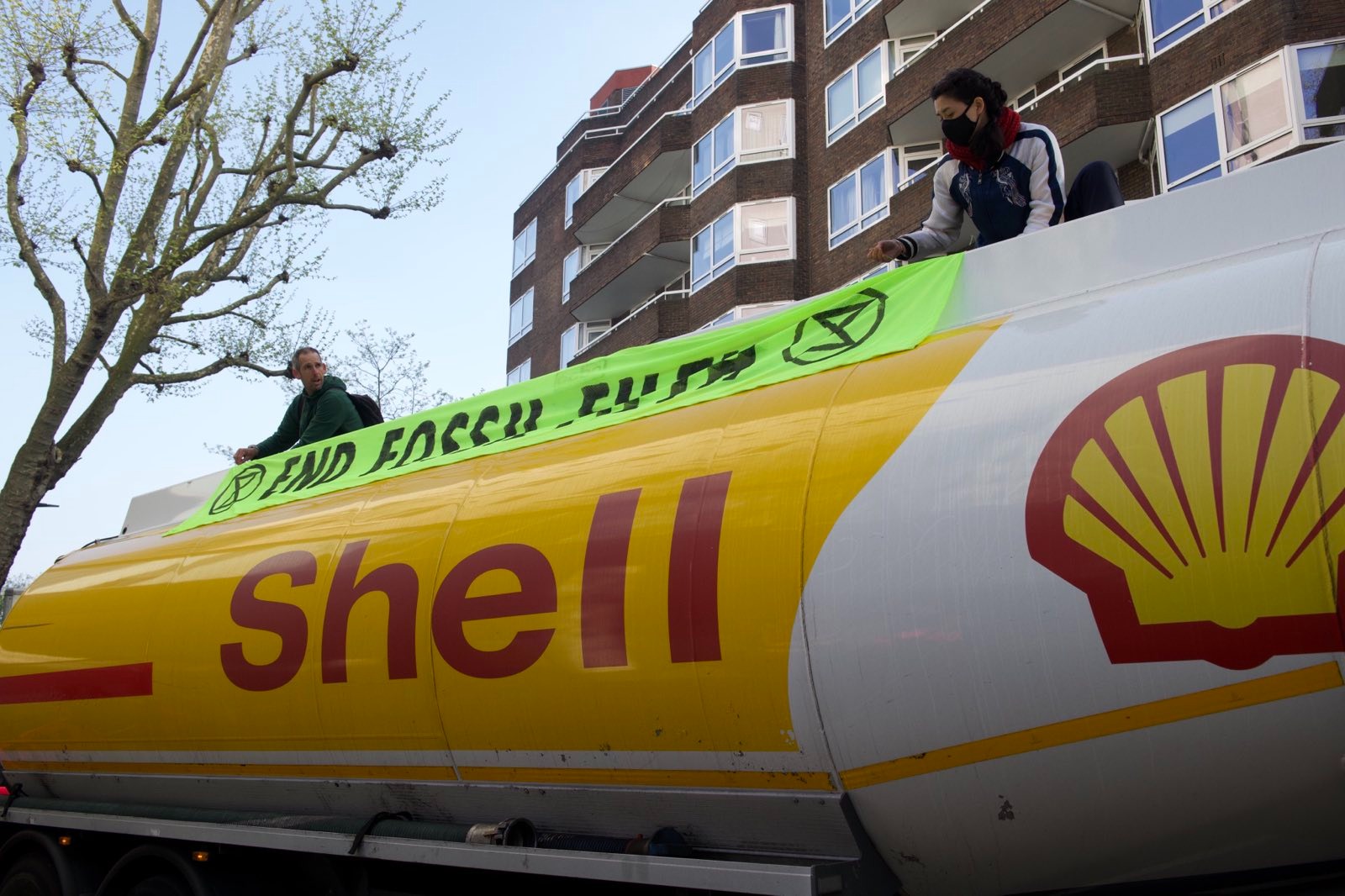 This morning Extinction Rebellion occupied an oil tanker off Bayswater Road in London. Three people – including Olympian Etienne Stott – have climbed on top with a banner that reads “END FOSSIL FILTH”. Several people are surrounding it and holding banners that read “END FOSSIL FUELS NOW”.

Etienne Stott, said: “I am acting to try to disrupt the toxic fossil fuel industry that is destroying everything we hold dear. I am hoping we can slow it down long enough to create a moment where everyone can stop and think where we are going and change course.

We need our government to rein in these companies and stop investing in fossil fuels now, rather than allowing oil companies to continue their stranglehold on our lives and our future.

“I am aware that my actions will cause anger to many people and I am prepared to be held accountable. But our government should also be held to account for its decisions which are destroying our planet’s ability to support human civilisation.”

Olympian Laura Baldwin who is also taking part in the action, said: “I feel desperate for our government to act on the climate crisis. But it is doing what the UN Secretary General, Antonio Guterres, says is moral and economic madness by expanding fossil fuel extraction.

I’ve been moved to take action having witnessed scientists and doctors risking their liberty to tell us that we will lose everything we love unless aggressive cuts to emissions are made immediately, and by people losing their lives and livelihoods right now around the world.

This is the most critical time in the history of humanity and I feel I must do all that I can to raise the alarm.”

The action comes as the April Rebellion prepares for its biggest day of disruption so far, when thousands are expected to take to the streets to call for an end to all new fossil fuel investments. Beginning at Speakers’ Corner in Hyde Park at 11am, there will be speakers, music and more with appearances from singer Jermaine Jackman and Bafta-winning actor Marlon Kameka.

A highly disruptive mass action will be the finale to our ten days of activities in London, which are focused on our immediate demand for an end to all new fossil fuel investments.

Other groups added their voices to the call, as Greenpeace, Green New Deal Rising and Just Stop Oil appealed to their supporters to take part in XR’s day of action. Politicians Caroline Lucas and Clive Lewis have also made video addresses in support of the Rebellion.

With the UN, the International Energy Agency and scores of NGOs also calling for an end to the fossil fuel economy, it is clear that the world is aligning around this obvious first step in tackling the climate and ecological crisis.

UN Secretary General Antonio Guterres said last week that investing in new fossil fuel projects was “moral and economic madness”. He also said that government and business leaders were lying about the actions they are taking to combat climate change.

Saturday is the culmination of a week in which Extinction Rebellion experimented with a decisive shift in tactics, with a move away from the use of large infrastructure and a renewed focus on people power and civil resistance.

There were innovative targeted actions including the shut-down of Lloyd’s of London, abseilers on Tower Bridge, the infiltration of Shell’s HQ and personal invitations to staff to mutiny or whistleblow. There was a novel tactic for strategic road occupations involving marches and mass sit-downs; and the rollout of Project 3.5, XR’s new public outreach programme focused on door-knocking.

On the ground mobilisation has resulted in around 3000 people taking part in non-violent civil disobedience training. “Look Up, Step Up” recruitment talks were held on all 10 days of the Rebellion, with audiences ranging from 50-100 new people in attendance at each.

Elsewhere around the country this week, the Just Stop Oil coalition has continued to courageously disrupt fossil fuel infrastructure. Blockades at oil depots and the disruption of tankers has caused a fuel shortage at petrol pumps across the UK.

See below for more details and links to the week’s best images and video.

After two years in which the pandemic restricted our ability to protest, civil resistance is now gathering steam around the world. Protest movements from Canada to Sweden, Austria, Australia and more are coalescing around the urgent goal of ending our reliance on oil and gas, before we run out of time.

XR co-founder Clare Farrell said: “Extinction Rebellion is calling on all peaceful, loving and determined people to step into rebellion and resistance. Our political history shows that nonviolence is a noble tradition, to which we all owe many of our most cherished rights. Coming together in our collective strength can turn the tide at the speed needed at this desperate time.”

Green New Deal Rising will join the Rebellion on Saturday

We’re heading to the Rebellion on Saturday, look out for the GND Rising banner near Speakers’ Corner & join us! 🤩 https://t.co/1Wu08Kkqv0

Tweet round up of civil disobedience around the world

There has been a massive uprising against fossil fuels over the last week. I keep getting glimpses of it, but I want to take a moment to take in how big it is & acknowledge the bravery of every person involved.

Here are some of the protest actions: 🧵#ClimateAction

HIGHLIGHTS OF THE WEEK, WITH LINKS TO MULTI MEDIA ASSETS

On the eve of Rebellion a group including two abseilers hung a huge 22mx3m banner from London’s Tower Bridge that read “END FOSSIL FUELS NOW”. The bridge was closed to traffic for four hours.

Thousands marched through the West End, bringing traffic to a halt with mass sit-downs at key junctions Oxford Circus and Trafalgar Square.

We blockaded both Vauxhall and Lambeth bridges, where health workers held the line before being arrested and removed by police.

Earlier in the day, as the march passed by the London office of oilfield services company Schlumberger, people spray-painted red hands onto the outside of the building.

Throughout the Rebellion, we’ve been growing the movement with days dedicated to public outreach.

Rebellion outreach is part of our ongoing 3.5% Project, inspired by the Bernie Sanders campaign. 3.5 involves people from local groups knocking on doors, and talking to their neighbours about the climate emergency, and inviting them to a “Look Up, Step Up” talk to find out how collectively we can all do something about it.

Since we launched in January, over 70 local groups have taken part, we have had nearly 4,000 conversations on the doorstep and more than 80% of those who have seen the talk have signed up to join XR.

If you’d like to know more about 3.5 watch our video:

Every day we’ve also been training new members in non-violent direct action techniques. Our training sessions have been extremely well attended. Around 80 per cent of those taking part in this rebellion are new to XR.

On Tuesday, we shut down Lloyds of London to demand that the insurance giant stop underwriting new fossil fuel projects, including the Trans Mountain Pipeline extension in Canada. At 7am, more than 60 activists used superglue, chains and bike locks, to block over twenty-five entrances to Lloyd’s building on Lyme Street, preventing staff from entering. Climbers also scaled the outside of the iconic building and dropped two banners that read:  ‘End Fossil Fuels Now’ and ‘Insure Climate Justice’.

It was the first time XR has closed down a major financial institution.

Outside, employees were greeted by members of XR’s TruthTeller project who invited them to blow the whistle via secure platform www.TruthTeller.Life, or to stage corporate mutiny from within.

On Tuesday, we also put up our own guerrilla adverts throughout the tube.

The action at Lloyd’s came after several days of continuous disruption at oil facilities by Extinction Rebellion and the Just Stop Oil coalition, where oil depots have been blocked across Birmingham, London and the South West, resulting in fuel shortages in parts of the UK.

On Wednesday, we infiltrated oil giant Shell’s HQ in Waterloo. Nine people, having gained access to the building, glued on inside the two main reception areas, while others glued the Skeena to the ground outside. One got as far as the offices on the eighth floor where he attempted to engage with staff.

As part of XR’s TruthTeller project to proactively foster corporate mutiny, protesters outside the building held up placards bearing the names of 100 individual employees working inside and the invitation “Join Us”. A role call of over 200 names was read over the loud speaker.

A firemans-style jumping sheet invited employees to “Jump Ship” before Shell turned toxic on their CVs, and a flyer handed out to staff as they left at the end of the day offered career coaching sessions for anyone ready to change industries.

Also on Wednesday, Scientists for XR glued themselves to the Department for Business, Energy and Industrial Strategy (BEIS) to highlight the clear scientific evidence that the UK Government is ignoring. They also pasted scientific papers and glued themselves across the entrance.

It was one of many acts of civil disobedience taken by scientists around the world in recent weeks.

Comedians Simon Amstell and actor Toby Regbo joined us at Tate Modern during our afternoon of public outreach.

4 of London’s busiest bridges were blocked on Friday on the 3 year anniversary of the April Rebellion in 2019 that catapulted XR into the mainstream – Waterloo, Blackfriars, Lambeth and Westminster were blocked for over 2 hours.

Scientist Emma Smart, whose picture appeared on the front page of the Guardian after she was arrested on Wednesday, went on nil by mouth hungry strike, in protest at police refusal to grant her bail. Supporters staged a vigil outside Charing Cross police station where she was being held.

The official poet of the 2012 London Olympics Lemn Sissay and fifteen other award-winning writers, poets and performers led a live street literature event to call on major oil companies to end fossil fuel production worldwide as the only credible action in response to climate collapse.

For more info, images, interviews, opinion pieces or any other questions about the Rebellion contact:

The daily livestream is here: http://xrlivestream.tv/live

Time has almost entirely run out to address the ecological crisis which is upon us, including the 6th mass species extinction, global pollution, and increasingly rapid climate change. If urgent and radical action isn’t taken, we’re heading towards 4˚C warming, and the societal collapse and mass loss of life that that implies. The younger generation, racially marginalised communities and the Global South are on the front-line. No-one will escape the devastating impacts.

Extinction Rebellion believes it is a citizen’s duty to rebel, using peaceful civil disobedience, when faced with criminal inactivity by their Government.