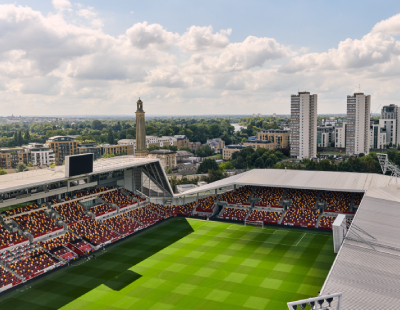 The Kew development, with the Apo branding draped across it, soars above the stadium and is visible for miles around. The area itself is a strange hotchpotch of the modern, state-of-the-art Community Stadium – home to Brentford FC and London Irish, and opened in September 2020 – riverside walks, historic pubs, industrial sites, big commercial buildings, interesting museums and busy roads and motorways.

Gunnersbury Park, one of West London’s finest green spaces, and the River Thames are within walking distance in either direction, as is much-loved Kew Gardens and Brentford (a historic town that played a key role in the English Civil War and is now best-known for its Premier League football team) itself.

Matt Finch, head of asset management at Apo Group and a likeable and genuine tour guide throughout, is in charge of showing us around, and immediately we’re taken to one of the higher floors to sample the USP of this particular development – the spectacular views, not just overlooking Brentford’s home ground but large parts of London itself.

Near-perfect views of the pitch are achievable from the balcony of the homes this high, making it a dream for any football or rugby fan – and an even bigger dream for any Bees or London Irish fans themselves.

The apartments are smartly decorated and furnished – perhaps a tad soulless, although that’s not helped by the apartment we’re in clearly being a show home, without the little stamps that tenants can put on their property.

They are also supremely well soundproofed. As soon as you step inside from the balcony and close the doors, the roar of the nearby M4 reduces to a very distant hum.

As well as the apartments, residents have access to various spaces – including a rooftop terrace (offering more spectacular views of the stadium and the capital), a yoga/fitness space and co-working areas.

Another of Apo’s USPs, Finch insists, is the app that residents can use to organise everything from board game nights to maintenance issues, rent and parcel deliveries.

“From the outset, Apo’s mission has been to build a dynamic community which proactively listens to its members to create a home environment that is more than just bricks and mortar,” Finch says.

“In achieving this, we have defied the odds, attracting record levels of new enquiries and applications. Our 595 homes at Apo Barking were all let seven months ahead of target, with 20% of the entire scheme being let in January this year. We’re seeing the same momentum build in West London at Apo Kew Bridge following the release of the first two buildings.”

Finch says that the development is drawing tenants from all kinds of demographics, and has developed an excellent relationship with the football club on its doorstep – who registered a terrific shock 4-1 win at local rivals Chelsea on the weekend – to ensure everything feels part of the same community.

The scheme has decent transport links nearby, with Kew Bridge (Overground and National Rail), Gunnersbury (District Line and Overground), Chiswick Park (District) and Brentford (National Rail) all in close proximity, while there are plans in place for community events to take place at the development in the spring and summer revolving around street food.

The area is home to The Musical Museum and the London Museum of Water & Steam, while a number of good cafes and pubs sit astride the river, a short walk away the Apo scheme.

There is a clear focus on community and creating a different renting experience for renters, but it’s undoubtedly the fabulous views on offer of the stadium and London itself that are the scheme’s biggest selling point – and a clear point of difference from other, otherwise quite similar, BTR schemes.