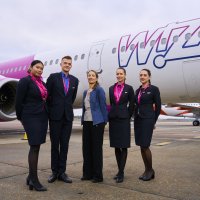 Wizz Air is eying further expansion in the UK market after launching the first of 18 new routes from London Gatwick (LGW) during the northern summer 2022 season.

The carrier will base five aircraft at the airport during the peak travel season, operating mainly to leisure destinations in Western Europe. The expansion comes after the ULCC acquired 15 daily slot pairs from Norwegian in December.

Speaking to Routes, Wizz Air UK MD Marion Geoffroy said the airline currently has fewer than 20 aircraft based in the UK but hopes to increase its fleet to 50 before the end of the decade. This will include adding A321XLRs to its fleet, opening up the potential for long-haul services from the UK.

“We’ve been a UK carrier since 2018 and we want to expand where it makes sense,” Geoffroy said. “As a group we have an order book of 450 aircraft as we speak that are expected to be delivered between now and approximately the end of the decade.

“There will obviously be some aircraft renewal, but there is easily the potential for 50 aircraft in the UK. There is room for expansion in London, in the UK regions and on long-haul operations as well.”

Hungary-based Wizz Air’s first A321XLRs are expected to enter service during the third quarter of 2023 although the carrier is yet to confirm which units will receive the aircraft. However, Geoffroy indicated that the UK subsidiary is already studying the potential for long-haul routes to points in the Middle East already served by the wider group.

“I think we would be maximizing the group network we have today where there is brand awareness,” she said. “We have a great presence in the Middle East—and this is a network which we are definitely looking at because the is demand there.”

Wizz opened a base at Gatwick in October 2020, launching a number of seasonal leisure services. However, group CEO József Váradi has repeatedly complained that growth has been stifled by the lack of available slots.

The acquisition of the slots from Norwegian means the UK airline will grow its network to 25 destinations from the airport this summer. Flights to Milan Malpensa (MXP), Naples (NAP) and Vienna (VIE) were among the routes to begin on March 27, with more services being added over the coming days and weeks.

The move further increases low-cost competition at LGW. Although easyJet remains is the largest carrier, Spanish LCC Vueling is opening a base and fellow International Airlines Group-owned British Airways is also set to launch a new lower-cost short-haul unit.

To help accommodate the capacity growth, Gatwick reopened its south terminal on March 27 after shutting during the pandemic nearly two years ago. It means the number of daily flights the airport can handle has almost doubled, swelling from 300 to 570.

Geoffroy said she welcomed the mounting low-cost competition, saying Wizz Air can offer the lowest fares in the industry. She added that she remains optimistic for a strong summer season despite the rising cost of living in the UK amid soaring inflation and rising energy, food and fuel prices.

As well as growing at Gatwick, Wizz Air UK is opening a base at Cardiff Airport (CWL) on April 8, launching flights to nine leisure destinations. It also reopened a base at Doncaster Sheffield (DSA) in 2020 and has a strong presence at London Luton (LTN).