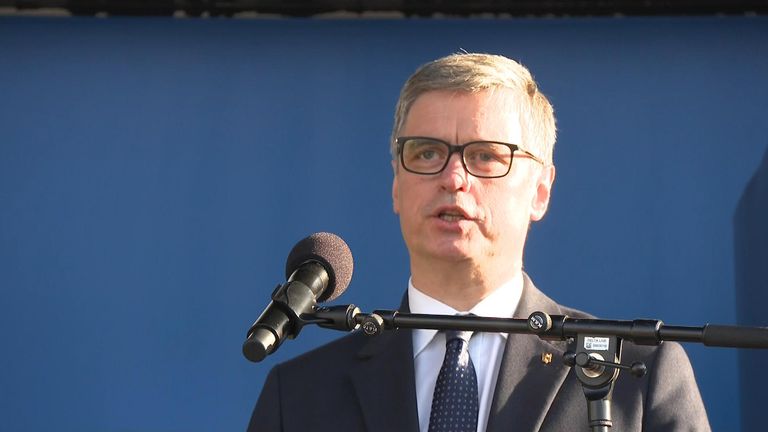 There must be no “appeasement” of Russia, the Ukrainian ambassador to London has said, adding that the UK’s help during the invasion will “never be forgotten”.

They chanted “we stand with Ukraine” and carried banners reading “stop Putin’s war” and “no fly zone”.

Crowds cheered the mayor of Kyiv, Vitali Klitschko, when he appeared on the big screen to address them.

Image:
Vadym Prystaiko says the conflict is ‘black and white’

Mr Prystaiko issued a strong warning at the event, saying: “Make no mistake – if Russia is done with Ukraine, it will go further west.”

There must be “no appeasement”, “no arguing with them” and “no warnings”, he said: adding: “Just stop.”

Mr Prystaiko thanked the UK for “giving us and continuing to give is great support”, saying it “will never be forgotten”.

And he praised British families who had “opened their hearts and homes for displaced Ukrainians”.

There are “no longer shades or nuances, just black and white: neither side can afford to lose – this is win or die”, the ambassador said.

He concluded: “We must be a light against evil. We must prevail.” 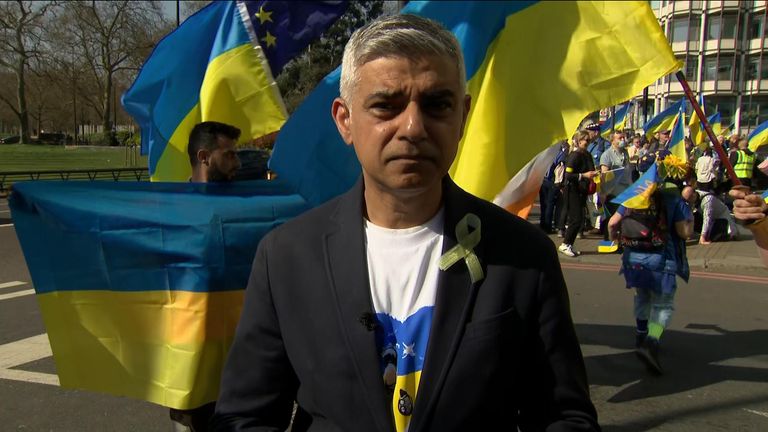 Speaking ahead of the event, London mayor Sadiq Khan said the UK should be doing “much more” to help those trying to escape the conflict.

“It is important throughout the next few days (and) weeks to make it far, far easier for those who are fleeing Ukraine to come here,” he added.

He told Sky News he was concerned about “complex visa forms” and “red tape” and “embarrassed” by the UK’s response.

Read more: Russia says it’s changing focus – what could this mean for the war? 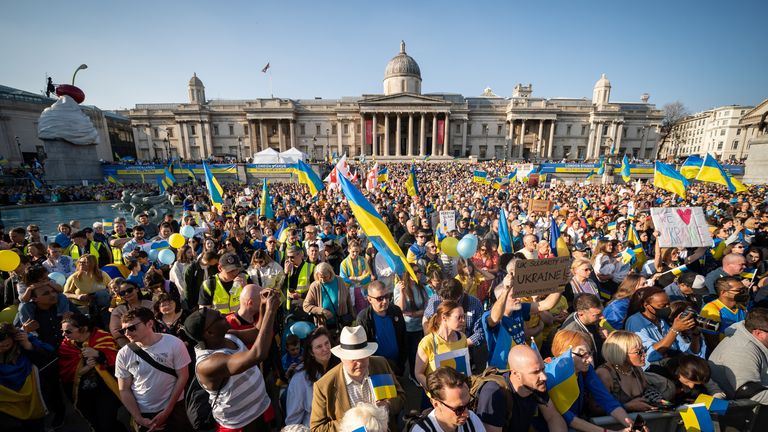 Image:
People gathered to listen to speeches in Trafalgar Square

Home Secretary Priti Patel has said proper security checks must be carried out.

The first refugees have begun to arrive in the UK, while Transport Secretary Grant Shapps has said he is preparing to welcome a family of Ukrainian refugees into his home – along with their pet dog.

Under the Homes for Ukraine scheme, those in the UK who have a spare room, or separate self-contained accommodation that is unoccupied, are being asked to offer to house Ukrainians for a period of at least six months.

Subscribe to the Ukraine War Diaries on Apple Podcasts, Spotify and Spreaker