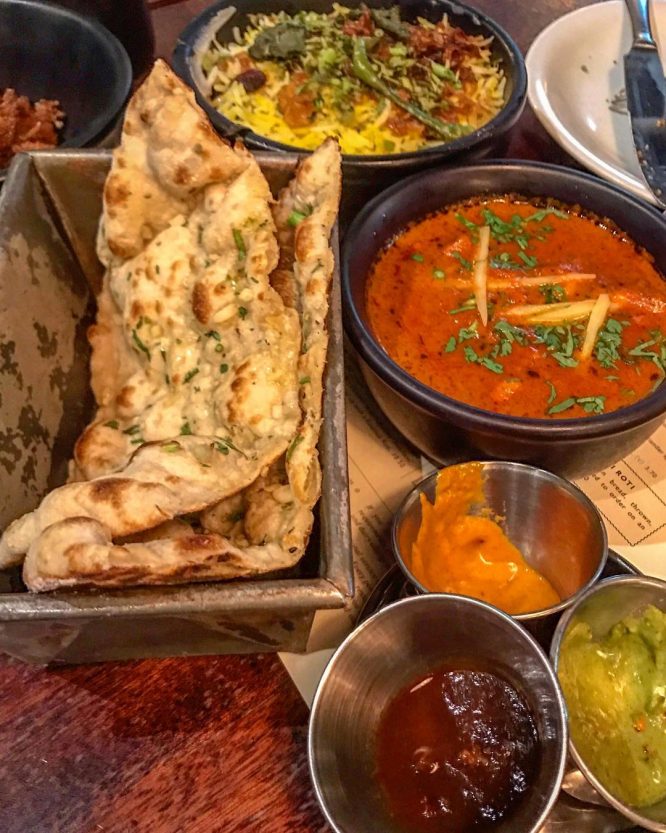 From rustic hole-in-the-wall spots to legendary, award-winning establishments, here’s our roundup of 15 of the best Indian takeaways in London to get you salivating.

It’s no secret that us Brits love ourselves an Indian takeaway. From a creamy korma to a blow-your-head-off rogan josh, there’s something for everyone when it comes to Indian cuisine, and that’s not even mentioning all the delectable daals, chat masalas, chapatis, samosas and poppadoms that can go along with it. Luckily for us Londoners, our beloved city offers some of the best Indian food outside of actual India, and plenty of them deliver right to your doorstep. So, you needn’t even bother getting up off the sofa to enjoy it if you don’t want to. Here’s our roundup of 20 of the best Indian takeaways in London to whet your appetite:

Let’s begin with a bang! The first entry on our list of the best Indian takeaways in London is a biggie. Trishna is from the brilliant minds of joint owners Karam, Sunaina and Jyotin Sethi, who have subsequently opened the award-winning Hoppers, Brigadiers and Gymkhana in its wake.

It’s so good that it won itself a Michelin Star back in 2012, and offers delicious South West Indian coastal cuisine with a distinct contemporary twist.

If you haven’t heard of Dishoom by now, then surely you’ve been living under a rock. This legendary spot offers a breakfast you need to try before you die as well as some pretty banging curries and sides. Highlights for us include the mattar paneer, the chole puri – a yummy chickpea curry served with puffy bread – and the spicy gunpowder potatoes, which are great if you’re looking to try something a bit different than rice.

This being Indian cuisine, they also cater well to vegetarians, vegans and gluten-freers, and they’ve got five different branches dotted all over the city – King’s Cross, Shoreditch, Carnaby Street, Covent Garden and Kensington.

As the ‘oldest North Indian restaurant in the UK’, the staff at Covent Garden’s Punjab Restaurant certainly know their stuff. Owned by the same family for four generations, they’ve been perfecting their recipes for – well, decades – and their fiery lamb madras is one of the best you’ll find anywhere in the city.

Other favourites on the menu include succulent butter chicken, acharri gosht – a tasty pickled lamb curry – and Pahalwan Amar’s mint chicken. Legend has it that if you eat enough of this dish and stand on your head for three minutes a day, you’ll get a buff body like the namesake family wrestler. Why not see if you can accept the challenge?

When it comes to Indian takeaways in London, The Tiffin Tin is a sure-fire contender to being close to the top of that list. Beginning its journey from one small kitchen in Hornsey, it now has spread across five different venues in North London, receiving high-end praise from food critics and punters alike.

The ethos here is on cooking authentic home-style Indian cuisine at a restaurant-quality level – all using environmentally-friendly and sustainable practises. And boy do they deliver. All the ingredients are fresh and no artificial ingredients are used, plus all the dishes are cooked using spices hand-ground by the staff themselves. 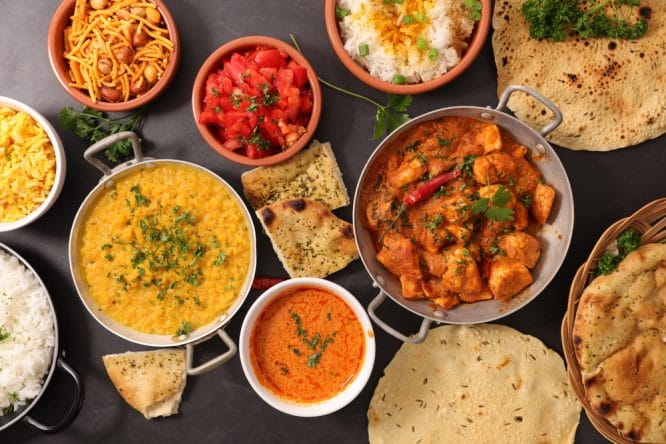 This cherished spot nestled between Camden Town and Primrose Hill is a perennial favourite of ours. A past winner of the ‘Indian restaurant of the year’ and the ‘award-winning chef of the year’ at the Asian Curry Awards, the food rustled up here is absolutely bloody delicious and covers a smorgasbord of traditional curries, tandoori grills, banging biryanis and sumptuous starters.

The real star of the show here though are the house specialties, which range from pan-seared Goan sea bass to clay-oven-roasted spiced duck breast and potato and apricot dumplings cooked in a creamy gravy. You’ll actually have to go and pick your takeaway up from Namaaste Kitchen in person – but don’t worry, they’ve got beers, wines and some smashing cocktails on tap.

Located at the top end of Holloway Road – just a stone’s throw from Upper Holloway – Bengal Spice is all about authentic Bengali cuisine, friendly service and fantastic flavours. Their signature dishes include the fish jara bhuna – a zesty and lemony, pickle flavour curry served with fresh spices, herbs and onions – and the Indian curried goat, served with potatoes, carrots, fresh peppers and mustard.

While this spot is great for takeaways, you can also opt to eat in. Prices are at the lower end here, and they’re a BYOB kinda place with no corkage fee, so you’ll get a hell of a lot bang for your buck.

East London isn’t exactly short of Indian takeaways – this is the home of Brick Lane remember – but the atmospheric Gunpowder is definitely the cream of the crop. An intimate 20-seater restaurant just down the road from Spitalfields Market, they also offer deliveries if you’d rather stay in rather than fighting to get a table.

The emphasis here is on celebrating traditional family recipes and giving them an innovative and unique twist. Mouth-watering options include Goan-style black tiger prawns marinated in lashings of garlic, black pepper and herbs, and lamb cutlets soaked in ghee made in the Kashmiri region of North India. 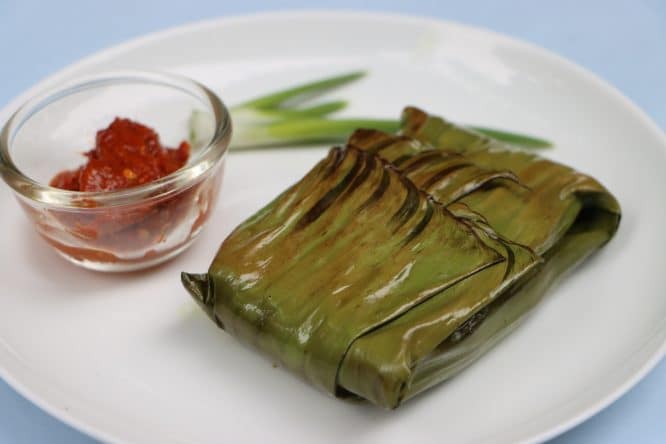 When it comes to Indian takeaways in London, we couldn’t not mention Udaya. Located in East Ham, this place has earned a reputation for cooking up some of the best Keralan-style cuisine in the whole of London. And for good reason – the food here is really that good.

Melt-in-the-mouth green pepper chicken goes hand-in-hand with lovely Keralan vegetable curries, but the real star of the show here is the seafood. Go for the pollichatu – a whole fish marinated in a secret sauce and steamed in a banana leaf – or the squid stir fried with coconut, ginger and mustard seeds.

Taking its name from an ancient trade route connecting Afghanistan to Bangladesh, the Grand Trunk Road offers up a vast array of dishes inspired by the sights, sounds, smells and flavours of this world-famous route.

Owned by the Michelin-starred chef Rajesh Suri, the dishes served up here include chargrilled barbequed meat originally hailing from the regions of Peshawar and Rawalpindi, Amritsari butter chicken and baby okra cooked with vinegar-soaked onions and a masala sauce.

This laid-back, colourful gem has been heralded as one of the best Indian restaurants in South London, and it’s easy to see why. Drawing on inspiration from the Southern Indian states of Karnataka, Kerala and Tamil Nadu, the food here is lip-smackingly good, with vegetarian thalis, tiger prawns, lentil pancakes and sea bream all on offer doused with an eclectic array of spices.

Ganapati has a sit-down restaurant, but they also have a takeaway option just further down Bellenden Road. Fill your boots with the chaliyam fish curry, the vegan chutney dosas and the namesake dal and you’ll definitely be a happy camper. 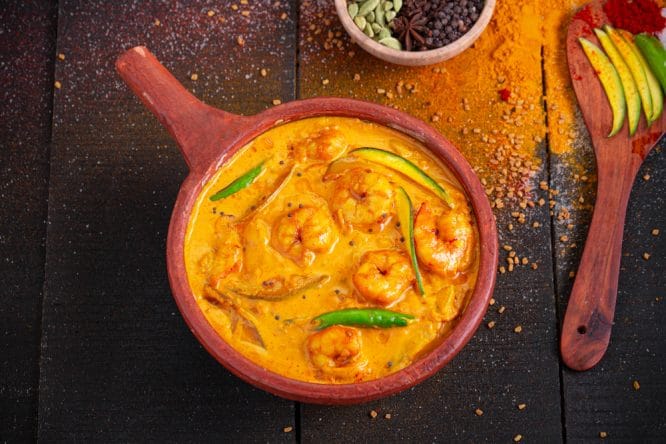 A popular South London spot, Babur has been keeping peoples’ bellies satisfied since it first opened its doors way back in 1985, and the food whipped up here really is fantastic. You can either order from its regular takeaway menu, or go slightly more upmarket with dishes from its excellent restaurant menu – both are in the same area of South London.

While all the food here is good, the seafood really is the star of the show. Go for the malai king prawn doused in coconut and Bengali spices and wash it down with a roasted cumin and Himalayan salt lassi.

The final entry of South London’s best Indian takeaways comes courtesy of the legendary Mirch Masala in Tooting. Beloved by our very own mayor Sadiq Khan, they offer superb grub at very reasonable prices, and they deliver all across London.

You can’t go wrong with their bubbling karahi dishes – which many consider to be some of the best in the capital – and they also have a whole host of tempting veggie and vegan dishes.

Southall is often billed as ‘Little India’ due to the strong Indian and Pakistani roots found here, and that title is definitely warranted when it comes to the Indian takeaways found here. Given the huge variety of options available, it’s pretty hard to go wrong, but you certainly can’t argue with Madhu’s.

With four decades under their belt, this family-run establishment has got their takeaway menu down to a tee, mixing secret family recipes with iconic Indian staples. They also do gourmet Punjabi cuisine with an added Kenyan twist, reflecting the Madhu family’s roots. 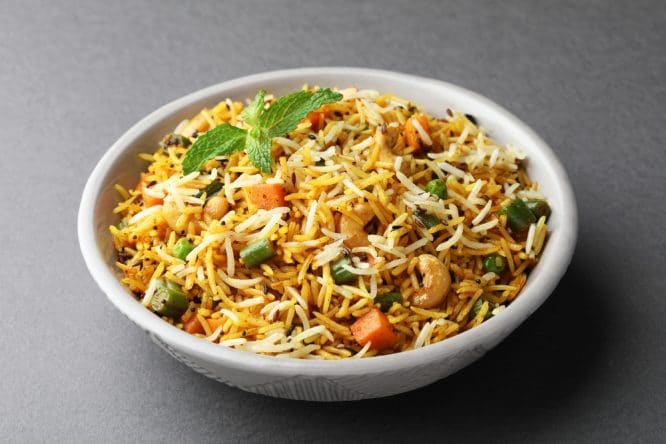 This West London institution swung open its doors in 1981 and hasn’t looked back since. Now a Fulham favourite, Nayaab was a part of the original Indian cuisine revolution when it first opened, and locals and visitors alike no flock from all over town to eat here.

Their innovative menu incorporates dishes from all across the Indian subcontinent, and they cater to whatever kind of cuisine you’re looking for. Meat lovers should check out the tandoori clay oven fare – which includes lamb tikka and giant king prawns – and veggies will be happy with the gobhi aloo, tarka dal and stir-fried vegan biryani.

Rounding off this list of the best Indian takeaways in London is the fab [email protected] in Maida Vale. Taking its name from Punjabi roadside eateries, this beloved eatery combines absolutely banging food with friendly service and more-than-reasonable prices.

Given the name, the plethora of chaat (or roadside snacks) served here are bloody brilliant, but the lamb shank madras, paneer butter masala and tandoori salmon aren’t to be sniffed at either.

Wanting to actually leave the house and experience an authentic Indian experience? Why not head to a new hidden bar beneath The Cinnamon Club.

London Property: £1.5m apartment in East London comes with 26 seater cinema, spa and swimming facilities, and its own restaurant