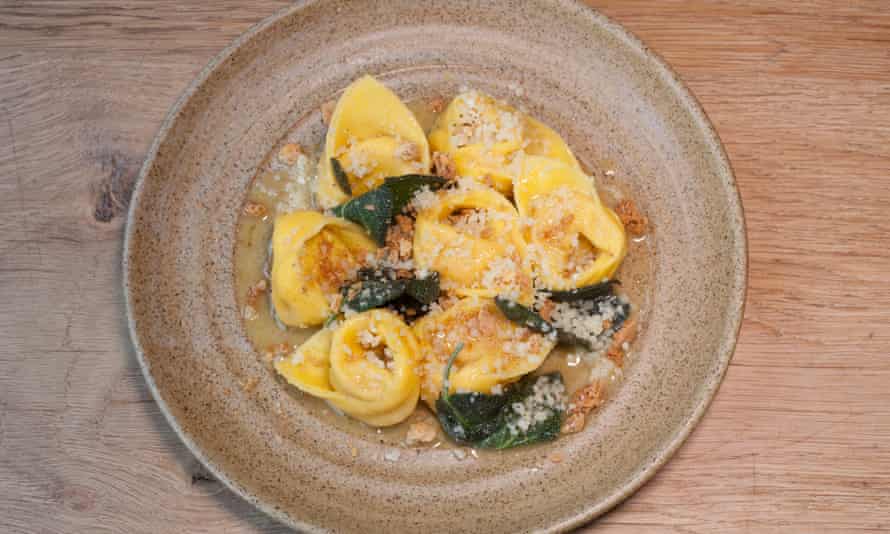 An email arrives from Australia. Greg declares himself a fan of this column. He also happens to be a newspaper subeditor and he’s noticed something. It’s the repeated use of a certain word. That word is “punchy”. By repeated I don’t mean just one or two uses. He has found 11 examples from the past six months. I have referenced punchy sauces and punchy Thai green curries, punchy loveliness and both a punchy affair and a punchy mess. Oh, the shame. I am clearly punch drunk. I could excuse myself. There are only so many words in the world. But that’s no excuse at all. So thank you, Greg. Today I’m officially announcing the retirement of punchy. It’s going straight from this page to a home for knackered adjectives, where it will share a room with “mouth-watering” and “sumptuous”. I wish it a happy retirement.

I’m glad Greg emailed because, had he not, I’m certain I would have made it the dozen. The food at Manteca, a self-styled nose-to-tail Italian in London’s Shoreditch, serves food which demands all the big, rumbustious words. It’s less a menu and more of a horn section. Every dish, every snack and small plate, every bowl of pasta, side and sharing platter, arrives with a tap dance and a huge ta-da! Manteca doesn’t do subtle or restrained. It does dinner. And it’s bloody marvellous.

The restaurant is a collaboration between David Carter, best known for the deep-glazed barbecue glories of Smokestak, and chef Chris Leach, who has time at Pitt Cue and Kitty Fisher’s on his CV. It started with a couple of residences in the centre of London (including one in the location now occupied by Sarap Bistro, reviewed last week). This is what it was all aiming at: a sandy-coloured, sexily lit space of clatter and crash, with an open kitchen and, downstairs in the basement, a glass-walled hanging cabinet for all the cured meats made on site.

We are wooed by curls of their baby-pink mortadella with ivory gems of fat and a smoky speck sliced so thinly it’s almost lacy. With it comes their springy, oily crusted focaccia. All is very good. The parade of small plates starts with puntarelle, that crunchy and lightly bitter member of the chicory family, done in the Roman style, which is to say dazzled and boosted by an anchovy and fresh chilli vinaigrette, which leaves you wondering why you used up all the damn bread on the salumi. Our waiter notices and brings more, cut in swabs designed for sauce mopping. It comes in handy for the next dish, the mere name of which is an outrageous act of lusty flirtation: pig skin ragu with parmesan and crispy skin. The latter is a plate-sized piece of dehydrated skin that has been inflated in the deep-fat fryer. We break it up and use it to scoop away at the massive flavour bomb of a slow-cooked, reduced and intensified ragu, under its blizzard of aged parmesan. 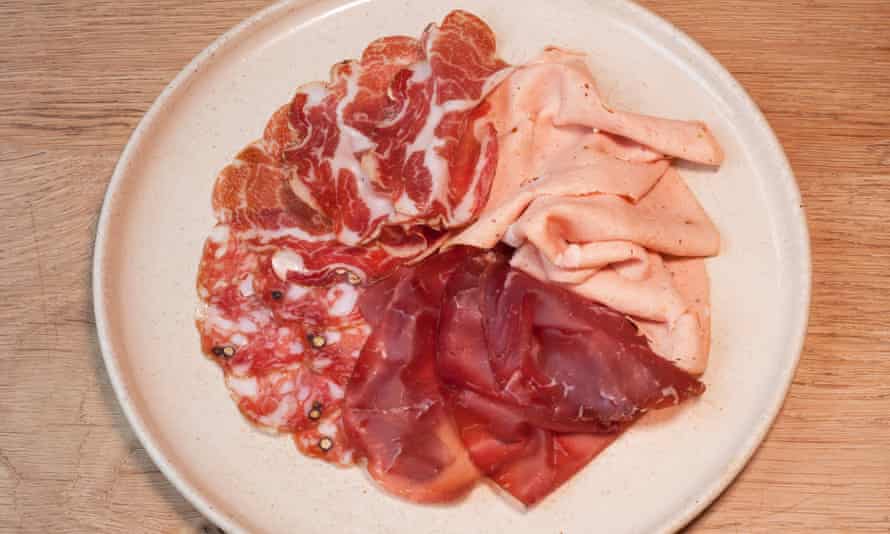 At ordering I was asked if I would like it with shavings of black truffle for an extra £6. Because I don’t know the meaning of “enough, already”, I said yes, of course I would like the extra black truffle. The measured hum of truffle gets deliriously swept away by the breaking wave of the ragu. We have a brick of pig’s head croquette, made with all the meaty bits and the sticky bits, which comes with a dish of pilacca, a fiery Italian hot sauce that might, involuntarily, make you say gosh. There is a puffy, billowing flatbread which isn’t very flat at all, studded with sweet salty clams.

Almost all the pasta dishes come in small portions at around £9, or large at £14. We share three of the small, starting with the Manteca take on the popular old stager cacio e pepe. Here the pepper-boosted sauce, which clings adoringly to the fat noodles, has been mixed through with rust-coloured brown crab meat to give it a deep, savoury kick rather than a seafood tang. It strikes me that if they had attempted to serve this dish in Rome, they would have been run out of town, or invited on a tour of the Colosseum to meet some underfed lions specifically re-introduced to the arena for the purpose. Ah, but we are not in Rome. We are in Shoreditch where brazen innovation is fully embraced. 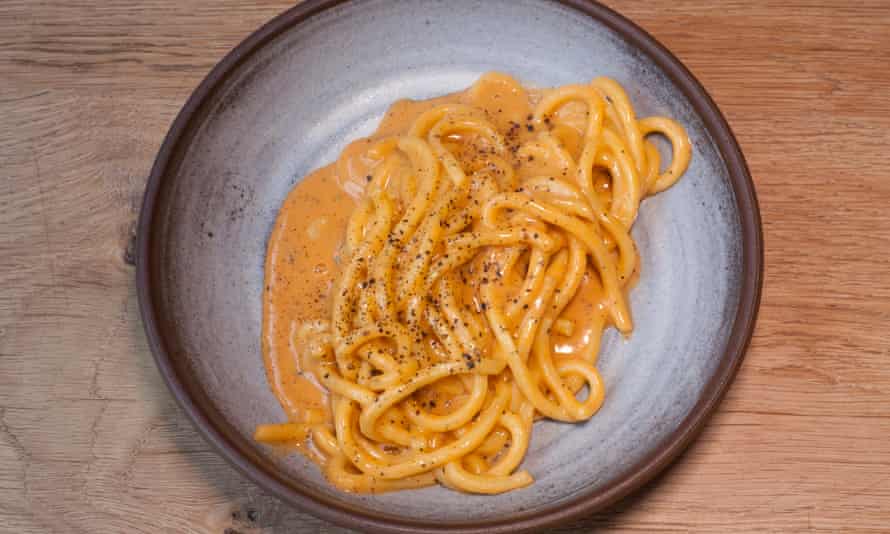 The nearest thing to a mellow dish is the cappellacci di zucca, the pasta stuffed with a sweet squash purée and sprinkled with an amaretti crumb so it becomes a plateful hinged between savoury and dessert. Then there are the silky, butter-yellow folds of fazzoletti with a powerful duck ragu with duck fat and crisp duck skin. It’s the love child resulting from a raucous night of unbridled shagging between a prim Roman pasta dish and a blousy cassoulet from Toulouse.

By this point we’ve rather lost a grip on what is reasonable. We really don’t need the flame-grilled chop of old ewe, with its glistening fat the colour of polished alabaster and its rosy meat and, on the side, the homemade lamb sausage that, like a great novel, is full of depth and meaning. Then again if this column concerned itself with issues of need, the whole damn premise would collapse. We are, however, restrained at dessert and merely share a piece of warm, crumbly honey cake with a scoop of salted caramel ice-cream. And a scoop of lemon sorbet, because that’s always a good idea. 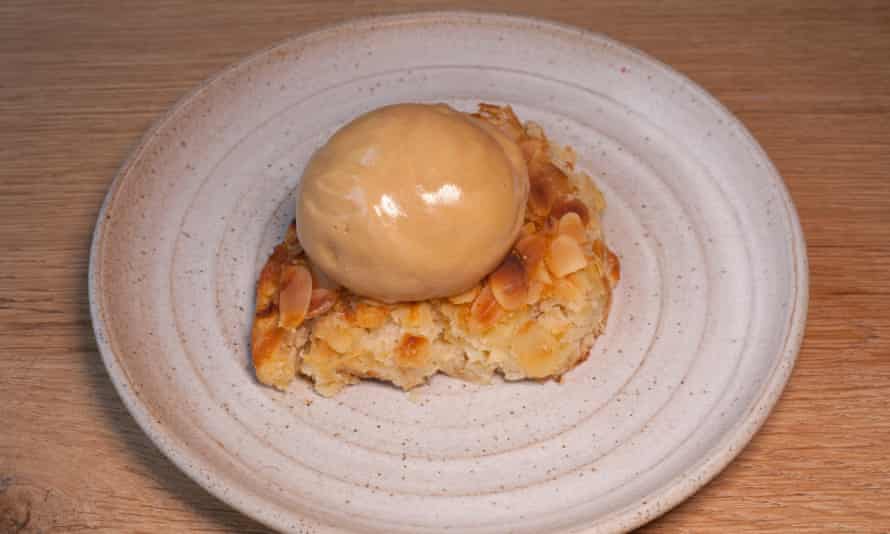 The wine list is divided, rather knowingly, between “classics” and “down the rabbit hole”. I appreciate this. It enables me to stay with the classics and avoid wines that will make me cross and shouty and boring. It’s hardly rich in bargains, but there is depth.

Manteca is a well-seasoned restaurant masquerading as a new one. Those extended residences mean Leach and Carter got to stress-test their idea to breaking point. The result is genuinely bold and exciting. For days before my dinner, I read and re-read the menu online, wondering whether the promise of the words – pig skin ragu, brown crab cacio e pepe and so on – could be realised on the plate. Or would it turn out to be just so much empty menu writing? It’s nothing of the sort. I left feeling I’d been fed by people with genuine verve and originality. I’d go so far as to say I felt paunchy. I said PAUNCHY. For God’s sake, can’t you people read?

The Marine Stewardship Council has just published a free online cookbook, featuring recipes from big name chefs from around the world, utilising sustainable species and fisheries. The recipes, illustrated with photographs by David Loftus, include a Scottish Haddock dish from the UK’s Mitch Tonks, a salad featuring Pacific halibut from Canadian chef Charlotte Langley and an Indonesian tuna fish curry by Indonesian chef Ari Galih. All listed fisheries are MSC certified. You can download the cookbook at msc.org

Amateur MasterChef winner Ping Coombes, who was crowned champion of champions in a one-off episode screened over the Christmas break, has just launched her own set of Malaysian recipe boxes. Her boxes, which include the ingredients for chicken rendang and a Nonya-style laksa, cost from £22 for a two-person box rising to £34 for the four-person option, and are available for delivery across much of mainland Britain. Visit thecookaway.com

Further up the scale, the restaurant recipe box company Dishpatch (dishpatch.co.uk) has added two options from Michel Roux Jr of Le Gavroche to its increasingly impressive roster. The ‘Classique’ includes French onion soup, boeuf bourguignon and a rum baba at £70 for two; the ‘Gourmand’ at £100, adds a pissaladiere, a salmon tartar and passion fruit jellies. At time of writing, January slots had almost sold out, so get in now for February.