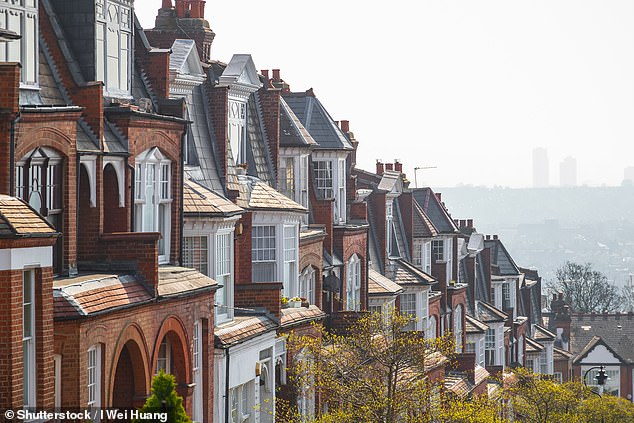 House prices saw their biggest annual rise since the financial crisis last year, but a ‘considerable’ slowdown may be looming due to a big squeeze on household finances and possible further interest rate hikes.

In cash terms, prices increased by £24,500 in the year to December, which is the largest annual cash rise since 2003, the mortgage lender said.

On a monthly basis, prices rose by 1.1 per cent, the same increase as in November, and recorded their biggest quarterly rise since November 2006.

‘The lack of spending opportunities afforded to people while restrictions were in place helped boost household cash reserves,’ he said.

‘This factor, alongside the stamp duty holiday and the race for space as a result of homeworking, will have encouraged buyers to bring forward home purchases they’d maybe planned for this year.’

Meanwhile, a lack of available homes for sale, and historically low mortgage rates, have continued to put pressure on prices.

But while an imbalance between supply and demand is set to continue into this year, rising inflation and possible further rate hikes to keep it under control are expected to take the steam out of the property market. ‘Our expectation is that house prices will maintain their current strong levels, but that growth relative to the last two years will be at a slower pace.

‘However, there are many variables which could push house prices either way, depending on how the pandemic continues to impact the economic environment.’

There already have been signs of the property market returning to normal levels after the end of the stamp duty holiday in October.

For example, mortgage approvals in November dropped to their lowest level since the summer of 2020.

Meanwhile, the Bank of England hiked interest rates from their rock bottom of 0.1 per cent to 0.25 per cent in mid-December, prompting some mortgage lenders to hike interest rates.

Just yesterday, Nationwide hiked rates on more than half of its mortgages in response to the base rate rise, with some products going up by three times the 0.15 per cent bank rate increase. 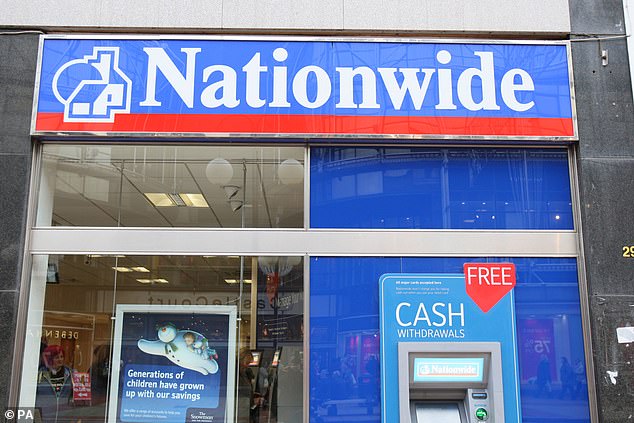 Interest up: Building society Nationwide has announced increases to many of its mortgage rates from today, citing a rise in the Bank of England’s base rate as the cause

Martin Beck, chief economic adviser to the EY Item Club believes that more will follow, and this rise in borrowing costs plus rising inflation and tax rises will keep a lid on house prices.

‘The Bank of England’s decision in December to raise bank rate will feed through into higher mortgage rates and is likely to be followed by further interest rate increases later this year,’ he said.

‘Households’ spending power is being squeezed by rising inflation and faces further pressure in the spring from tax rises.’

But, generally, experts do not expect house prices to fall off a cliff as many will still want to move, while a lack of supply will continues to prop up prices.

Andrew Montlake, managing director of mortgage broker Coreco, believes mortgage rates are still attractive even if they rise a bit.

‘The past two years have radically transformed what people want from their homes and even though rates are rising they are still exceptionally low in historical terms. The market is also being propped up by a chronic lack of supply.’

Jason Tebb, chief executive of property portal OnTheMarket.com, said: ‘Even with an interest rate rise in December and the prospect of further rate hikes this year, there is still plenty of confidence among buyers.

‘While some may put moves on hold while the Omicron variant plays out, there are many serious purchasers for whom a move remains a necessity.’

Jeremy Leaf, north London estate agent and a former RICS residential chairman, said: ‘Stretched affordability means that prices are unlikely to rise as quickly as they did for a large part of 2021 but family houses in particular will continue to do well.’

Andrew Simmonds, director at Bristol-based Parker’s Estate Agents, said: ‘Although prices this year will grow at a slower rate than in 2021 due to rising rates, taxation and the energy crisis, the market certainly won’t go off a cliff due to the lack of supply.

‘I am expecting to see many vendors sell and move to rented with a view to onward purchasing later in 2022 or 2023.’

‘Business has been buoyant as we start the year, with plenty of enquiries coming through. January can be quite a slow month as people gradually get back to work and find their feet but there are still motivated buyers who didn’t transact last year and are keen to do so, particularly before interest rates rise further.’

The rate of increase in Wales was slightly lower than a 14.8 per cent rise recorded in November.

Northern Ireland was also one of the strongest performing parts of the UK, with house price growth at 10.6 per cent.

House prices in Scotland increased by 9.7 per cent year on year.

In England, the North West was the strongest region, with house prices up by 11.8 per cent.

London remained the weakest performing area for annual house price inflation, with a 2.1 per cent increase.

‘We bought a 1970s milk float on eBay for £2,000 and turned it into a mobile zero-waste shop that travels around London’