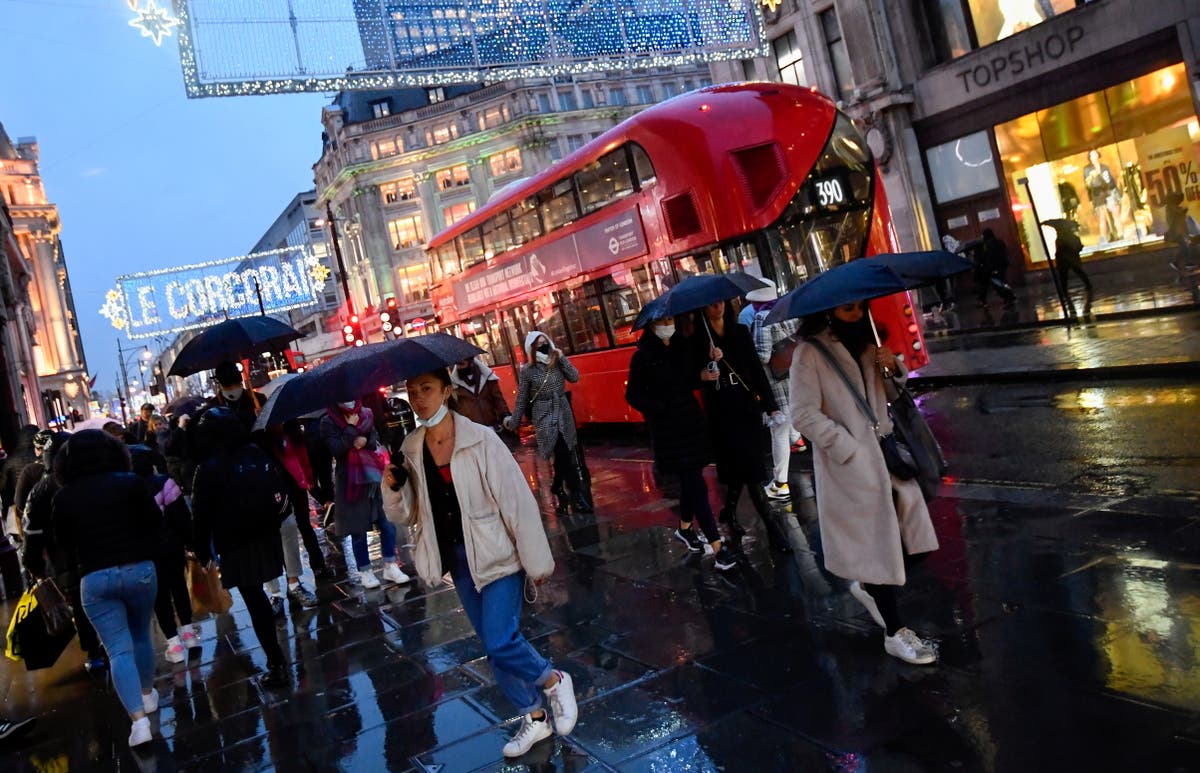 It comes as the capital braces itself for the introduction of tough “Plan B” restrictions aimed at delaying the spread of the new Covid-19 strain.

The Prime Minister also said that work-from-home guidance will return and Covid health certificates are to become mandatory in large venues from next week.

We will bring you live updates here.

The UK is going to see a “really rather large wave of Omicron” and deaths in the next few months, a scientist advising the government has said.

Asked about the trajectory of the Covid pandemic, Professor John Edmunds, a member of the Scientific Advisory Group for Emergencies (Sage), told a Royal Society of Medicine briefing “we’re certainly not out of the woods”.

“What happens next? It’s pretty clear the virus hasn’t done with evolution. It’s going to continue to evolve.

“I’ve long thought that what we’ll start to see is that the virus evolves towards being more of an immune escape than necessarily more transmissible.”

The Government said, as of 9am on Thursday, there had been a further 50,867 lab-confirmed Covid-19 cases in the UK. It also said a further 148 people had died within 28 days of testing positive for Covid-19.

Separate figures published by the Office for National Statistics show there have now been 171,000 deaths registered in the UK where Covid-19 was mentioned on the death certificate.

The figures were released as it was announced Communities Secretary Michael Gove is self-isolating after coming into contact with Australian Deputy Prime Minister Barnaby Joyce, who has tested positive for coronavirus.

Covid-19 case rates in London, eastern England and the south-east have climbed to their highest level since the start of the year, new figures show.

A total of 648.5 new cases per 100,000 people were recorded in the south-east in the week to December 5, the highest rate for the region since the week to January 3.

The south-east has recorded the highest regional rate in England in the three most recent weeks, suggesting it is one of the main areas of the UK driving the current spike in cases.

The figures, from the Health Security Agency, show rates are rising in all regions along with most age groups.

Three women have been fined for attending gatherings in breach of coronavirus rules on the same day as the alleged Christmas party at Downing Street last year.

The Metropolitan Police has said officers will not investigate the alleged December 18 event, where staff and aides are said to have drunk together, eaten cheese and swapped secret Santa presents.

But prosecutions for breaches of Covid-19 regulations at Westminster Magistrates’ Court last week included three women convicted over gatherings on the same day as the alleged festive bash, according to court records first reported by the Evening Standard.

Ami Goto, 23, from Marylebone, and Ebru Sen, 26, from Sittingbourne in Kent, were each fined £1,100 plus £210 costs for a gathering of two or more people in a flat in Holborn when London was under Tier 3 restrictions.

Emilia Petruta-Cristea, 24, was also fined £1,100 and ordered to pay £210 costs over a gathering at her home in Wanstead.

The cases were dealt with behind closed doors by a magistrate sitting under the single justice procedure.

Slovakia to pay over-60s for getting vaccinated

Slovakia’s parliament has approved a plan to give people aged 60 and over up to 300 euros (£260) if they are vaccinated against Covid-19.

It is hoped the measure, drafted by Finance Minister Igor Matovic, will boost vaccinate uptake as Slovakia currently has one of the EU’s lowest vaccination rates.

So far, only 46.5 per cent of the nation’s 5.5 million people have been fully vaccinated.

The deal is a compromise because the current four-party ruling coalition in Slovakia was split over the issue.

The original plan had been to give people vouchers worth 500 euros (£430) that could be used in certain businesses, but it was opposed by the pro-business Freedom and Solidarity Party.

Slovakia has been facing a record surge of infections, making it one of the hardest hit nations in the world.

The country has been under lockdown since November 25, with citizens allowed to leave their homes only for specific reasons.

Currently, 3,419 people are in hospital in Slovakia, putting the health system under pressure.

If the number reaches 3,800, the government plans to impose more restrictions. Slovakia has reported over 757,000 coronavirus cases and 15,179 deaths in the pandemic.

Grant Shapps: Plan B necessary to ‘keep lid on’ Omicron

Transport Secretary Grant Shapps said the Plan B rules were necessary to “keep a lid on” the Omicron variant.

Asked if he had spoken out about the new restrictions, he said: “I think we have to do whatever is required.

“I am afraid with the wave of Omicron it appears to double in something like two to four days, which is the estimate, if you do the maths you discover there are already one million potential cases by Christmas.

“We know what happens if a very small proportion of those people have to go to hospital.

“Hospitals become full and we cannot take people in for emergency treatment or elective surgery, and so it is very important we keep a lid on that.

“So, yes, I was involved in the discussions about what we should do.”

He said Plan B restrictions have been known since July, adding: “Hopefully it will enable us to keep a lid on Omicron and make sure, in the meantime, everyone is getting boosted which is the thing, ultimately, we think will help.”

The Prime Minister was making a “broader point” when he said there needed to be a “national conversation” when asked about mandatory vaccinations, his official spokesman said.

Asked about the comments, he said: “I think he was making a broader point on the intention to keep developing further mitigations against coronavirus and any subsequent mutations, be that polyvalent vaccinations or further therapeutics, like the antivirals that we’re rolling out.”

He said: “We recognise how challenging this is, and disheartening for the public to see us having to introduce further restrictions, albeit at a relatively limited level.

“And so we will do everything possible to continue to be at the cutting edge of this work.

“I think he was clear that he didn’t want us to have a society and culture where we forced people to get vaccinated.”

Transport Secretary Grant Shapps said he was “upset, even infuriated” while watching the leaked Downing Street video of aides joking about a Christmas party because his own father was ill in hospital over the festive season.

He said: “This time last year my dad was lying in hospital and I couldn’t go and visit him.

“We didn’t know if he was going to make it.

“In fact he was in hospital for four months and he did make it, I’m pleased to report.

“So I was quite upset, even infuriated, watching the video the other night and it is absolutely right that it is properly and fully investigated.

“It should be said that the Prime Minister was not present at any of these alleged events and indeed we do not know what actually happened, and that is why he has asked the Cabinet Secretary to look into it and report back.”

Downing Street indicated Cabinet Secretary Simon Case made the decision to widen the scope of the investigation into Westminster parties during the 2020 lockdown.

“As the Prime Minister set out, it’s up to the Cabinet Secretary, as part of an independent process he is able to look into what he feels is relevant and appropriate,” the Prime Minister’s official spokesman said.

The review will look at a confirmed gathering at the Department for Education’s Whitehall headquarters on December 10 last year, and a reported leaving do for a No 10 aide – allegedly attended by Mr Johnson – on November 27, as well as the Downing Street party on December 18 which triggered the investigation.

The Prime Minister’s official spokesman said the inclusion of proof of a negative test in Covid certification plans was a “proportionate way” of introducing the measure.

But it was confirmed this could be a lateral flow test taken at home, where the trust is put on it being reported correctly to the NHS.

There will be no fine for anyone faking a coronavirus test result but there would be fines for businesses who did not check Covid passes properly, starting at £1,000 – halved if paid within 14 days – rising to £2,000, £4,000, then £10,000 for subsequent offences.

There would also be penalties for people who provide fake Covid passes.

A text message or email from the NHS could also be used to prove Covid-19 status, as well as the official Covid pass.

The spokesman said that so far the public had been taking it “seriously and being responsible” with this method of testing.

BREAKING: Major 999 response as A635 Mancunian Way closed in both directions – latest updates

Vendors’ profits soar – but not in London or if the…

London still home to the most £1m+ transacti…