A Met Police officer who ran over a cyclist during a police faces losing his job, even after being cleared by a jury.

PC Eugene Acheampong was found not guilty of causing serious injury by dangerous driving after a trial this week.

But the police watchdog has confirmed it will pursue a misconduct investigation over the incident.

The ordeal left a man with a severed left ear, collapsed lungs, a broken front tooth and fractures to his rib jaw and vertebrae.

It happened after PC Acheampong was called to reports of two suspects ‘tampering’ with parked cars on August 3, 2019.

When 46-year-old Arnold Taylor tried to flee on a bicycle, the officer chased him in a patrol car.

Taylor lost control and disappeared underneath the BMW police car after PC Acheampong veered close to him, the court heard. 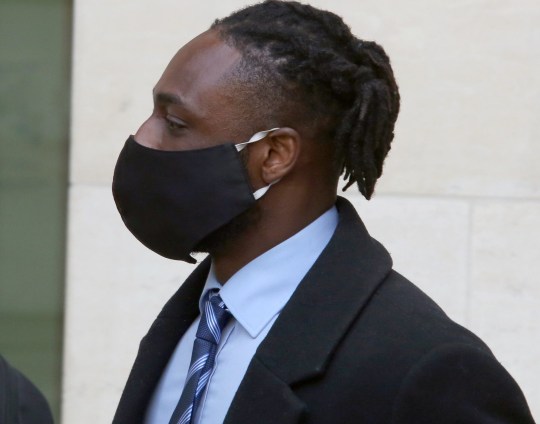 Despite ‘no defects’ being found on the police car that would have contributed to the incident, ‘the blue lights were not working’, the court heard.

In a prepared statement given at his police interview in January 2020, the defendant claimed his driving was ‘safe and sensible’ but the rider ‘just seemed to disappear’.

Following a forensic collision investigation, it was discovered PC Acheampong was travelling at 27mph when his police car hit the rear wheel of the bike, causing it to fall, Mr Recorder Jas Jandu heard.

The jury of seven women and five men returned a verdict of not guilty to one count of causing serious injury by dangerous driving.

The jury could not reach a verdict on the lesser offence of careless driving and were discharged, which the CPS could choose to pursue again.

The Met are expected to schedule a misconduct meeting to discuss the case further, according to the Independent Office for Police Conduct (IOPC).

A spokesperson said: ‘We found that PC Acheampong has a case to answer for misconduct for breaching police professional standards for duties and responsibilities, orders and instructions and use of force.

‘The MPS will now schedule a misconduct meeting in due course.’

Jamie Rayner, a 27-year-old Met officer working in South London, has been jailed for more than two years after ‘assaulting and controlling his girlfriend’.