Animal rebellion is calling for a switch to plant-based diets to save the planet (Picture: Animal Rebellion)

Animal rights demonstrators have been spotted climbing a Government building this morning demanding a nationwide shift to a plant-based diet.

The building in Marsham Street is also shared with the Home Office. The group tweeted this morning that it will ‘take action until the government defunds meat and subsidises a plant-based transition’.

It added: ‘meat and dairy is one of the leading producers of greenhouse gases and causes 90% of Amazon deforestation.

‘World leaders at [COP26] cannot talk about meeting the Paris Climate targets and securing global net zero without addressing that our food system is destroying our planet.’

Protesters climbed the building using equipment from around 6am this morning and unveiled a banner saying: ‘COP26: Invest in a Plant-Based Future’. 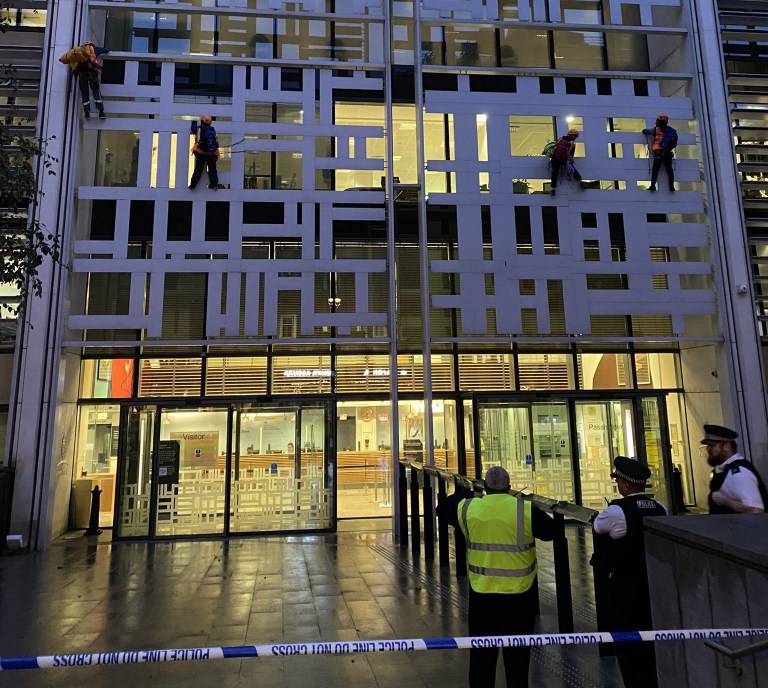 Animal Rebellion says it intends to remain on the building, suspended in hammocks, until Prime Minister Boris Johnson pledges to cut all taxpayer support for animal agriculture.

Demonstrators also want him to urge all world leaders to do the same when they attend the COP26 UN climate change summit in Glasgow later this week.

Animal Rebellion spokesman Nathan McGovern said: ‘Our protesters climbed the building in the early hours of this morning to send a clear message that we want an end to support for animal agriculture which is killing our planet.

‘The four, who are around 10 to 20 metres high, have unveiled a banner saying “Cop26: Invest in a plant-based future”.

‘We will see what the situation with the police is, but the plan is to stay in place indefinitely and this will remain a peaceful protest.’ 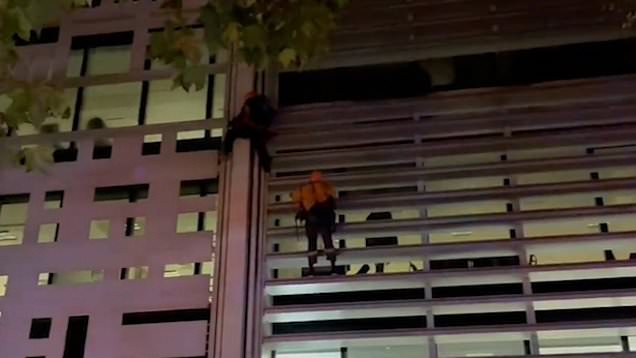 Fellow spokesperson Bel Jacobs added: ‘The UK Government is simultaneously saying that it is a world leader in climate change whilst propping up the unsustainable and unprofitable meat and dairy industry, one that emits disproportionate amounts of greenhouse gases. This hypocrisy has to end – we need to defund meat and subsidise plant-based alternatives instead.’

According to Animal Rebellion and Greenpeace, the UK Government spends at least £1.5billion per year subsidising livestock farming.

This is around half of its agricultural subsidies and ten times the country’s annual budget for planting trees.

Despite a huge rise in demand for plant-based proteins, the UK has only committed £90million in research and development for this sector, Animal Rebellion says. 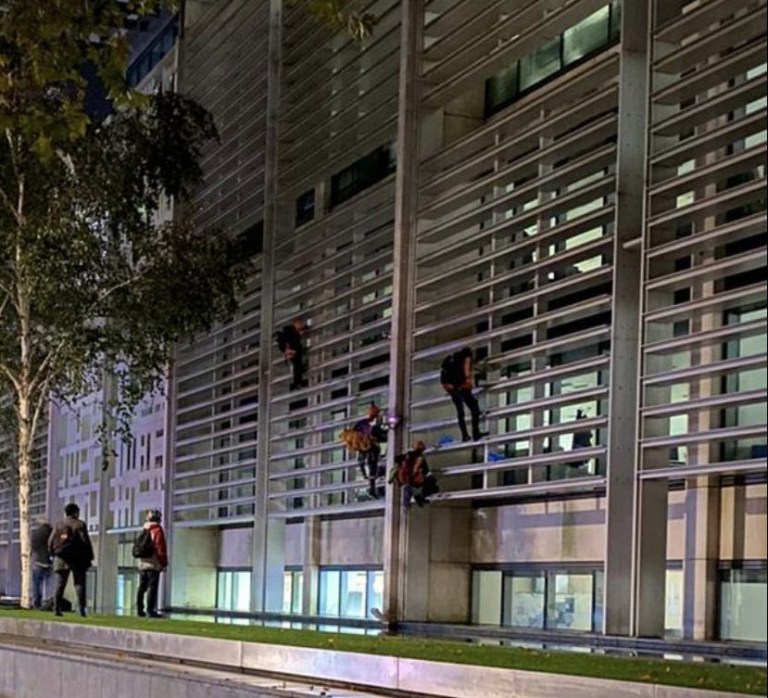 They want Boris Johnson to urge other world leaders at the COP26 summit to stop funding the meat industry (Picture: Sky News)

Animal Rebellion, which is closely affiliated with Extinction Rebellion, is demanding the Government invest in vegan alternatives instead.

This was recommended by the National Food Strategy, for the sake of both protecting the planet and to reduce animal suffering.

The Government commissioned report – the first independent review of the UK food system in 75 years – advised the UK to invest £125million for innovation into alternative proteins to replace meat, dairy and eggs.

It challenges the nation’s meat consumption, stating: ‘Our current appetite for meat is unsustainable. Plant-based proteins produce 70 times less greenhouse gas emissions than an equivalent amount of beef, and use 150 times less land.’

A Scotland Yard spokesman said: ‘Police were called at 6.09am following reports that a number of protesters had scaled a government building in Marsham Street.

‘Officers are on scene with the London Fire Brigade. There have been no arrests at this time.’ The force said on Twitter that it was ‘engaging with the protestors’.

The group – an offshoot of Extinction Rebellion – is demanding all homes in the UK are properly insulated as a means of fighting climate change.

Yesterday one demonstrator was filmed wincing in pain as he glued his face to a road in the City of London.