Tens of thousands of people have taken part in the first London Marathon in more than two years, as runners were treated to sunshine and settled conditions after a wet and windy Saturday.

More than 40,000 people donned their trainers to tackle the traditional 26.2-mile route from Greenwich to The Mall, following the cancellation of the 2020 race and delay to the 2021’s due to COVID restrictions.

Sisay Lemma of Ethiopa, who came third last year, won the men’s elite race in exactly 2:04.01, while the women’s was won by Kenyan Joyciline Jepkosgei in 2:17.42 – making her the seventh-fastest woman in history.

Away from the elite contests, a host of retired top sports stars were among the recognisable faces who joined the thousands of members of the public for the race.

Sky News’ Enda Brady also completed the race after recovering from COVID-19, which had left him bed-bound and struggling to breathe.

Olympic BMX silver medallist Kye Whyte got the mass race started and marathon organisers Virgin Money London said: “So many smiles, so good to have you back!”

Last year’s marathon was replaced by a virtual run where participants chose their own route, and a further 40,000 participants will earn their medal by taking part in the virtual event this year.

For those who were in London, they enjoyed far nicer conditions than those inflicted upon the capital and other parts of the country yesterday. 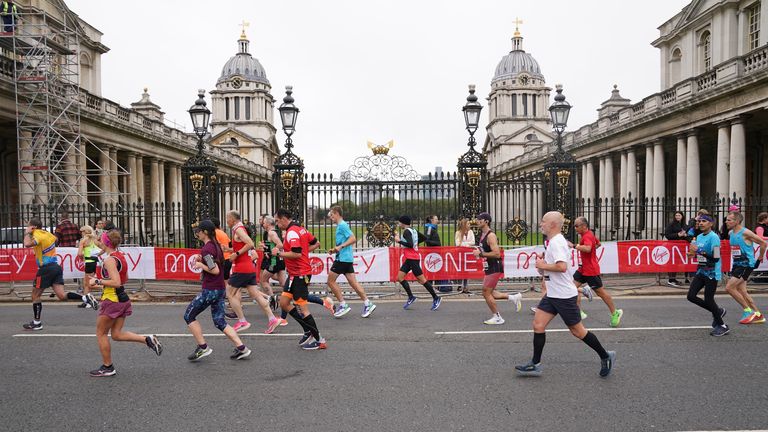 Ahead of the race, a Met Office spokesperson said: “It looks a lovely sunny morning… plenty of sunshine around but a bit of a south-westerly breeze and the cloud will tend to increase as the race goes on.

“Certainly for later finishes into the afternoon, there will be more cloud around the wind will have picked up a little bit, and there will be an increasing chance of a shower developing as well.” 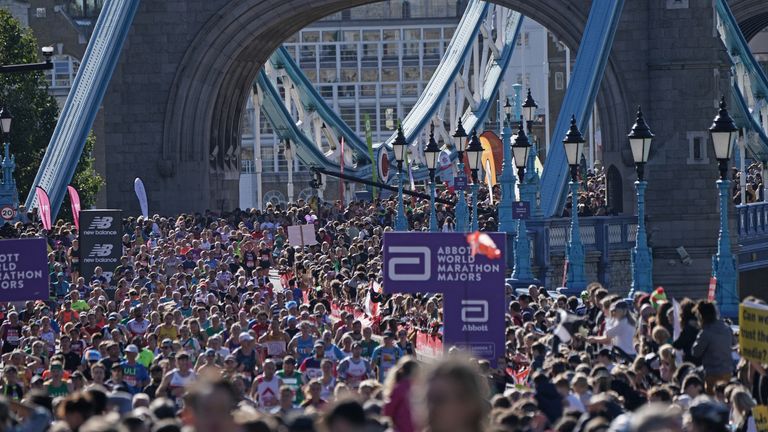 Image:
Runners cross Tower Bridge during the 26.2-mile route from Greenwich to The Mall

Other areas of the UK were also due for average temperatures on Sunday – for example Manchester, home of the Conservative Party conference – peaking at around 14C (57F).

It was due to be brighter for most, although some heavy showers were forecast for western parts of the country. 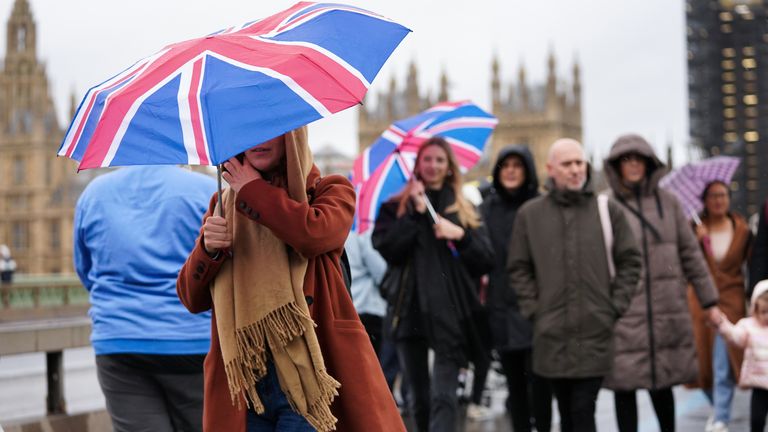 Image:
A yellow weather warning for wind and rain was in place across much of southern England on Saturday 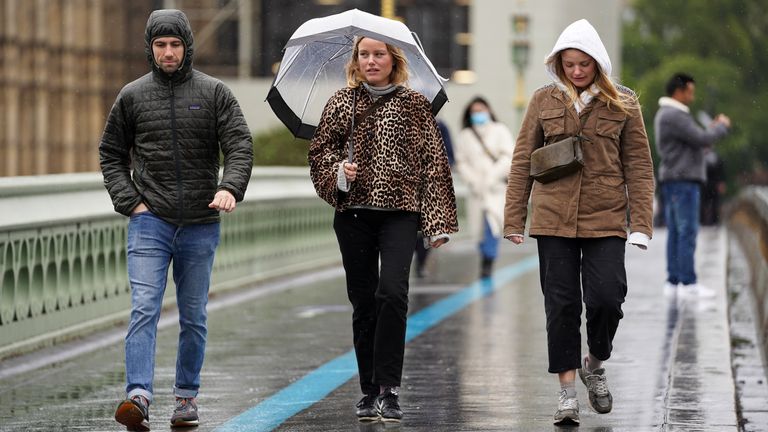 Image:
People walk across Westminster Bridge in the rain on Saturday

Meanwhile, a yellow wind weather warning is in place for the Shetland Islands for Sunday, with gusts of up to 70mph (113kph) expected to cause disruption to travel, especially in coastal regions.

According to the Met Office, further coastal gales are possible in the south and the west on Monday and heading into Tuesday, as another weather system moves in from the Atlantic.

More heavy rain and strong winds are expected in parts of Wales and southern England in the early part of next week.

WOW! What a day. London, I love you. That was such a special race today. The first marathon in person for 889 days and that finish line feeling will live forever.

Nothing beats the buzz around the city on marathon day and this felt like one huge champagne cork had been popped. And how the runners and spectators drank in that emotion. Every last drop of it!

A friend of mine once won the Grand National (covering any distance is much easier on a horse!) and said he wished he could bottle the emotion and every now and then just take it out and sniff it. That’s what London felt like today, the whole way round.

The pandemic brought changes, but nothing can ever change this great race. People from all walks of life coming together for a common cause.

There were the fancy dress runners, Spider-Man as ever, the guy dressed as a pot plant, the runner bandaged up as a ‘mummy’, they were all out in force. Liz Winton, the rhino runner was also back. But in truth, every single runner here today was a superhero just getting to the start line.

The support was as noisy and as boisterous as before. There were Morris dancers alongside Sikh drummers, Gospel singers and the raucous London public who came out to claim these streets again.

I caught the virus at the end of June and it ripped into my lungs. For two weeks I didn’t leave my bed, couldn’t breathe properly for five weeks and couldn’t walk very far.

During those dark weeks I often uncorked my London finish line memory and bottle. Had I been able to smell anything I would have sniffed it. It got me through.

This race is now in its fifth decade and has raised more than £1bn for good causes. It is the best of London, the best of Britain and you know something? The best of humanity.

My heartfelt thanks to all the volunteers and marshals who made this incredible race possible this year.

The light from London this weekend will shine all around the world. We are back! See you on the start line next year.