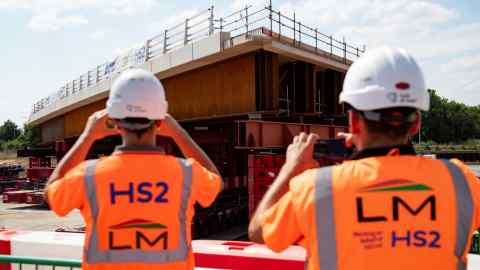 Sign up to myFT Daily Digest to be the first to know about High Speed Two Ltd news.

The cost of the UK’s new HS2 high-speed railway line from London to the north of England, which has already risen from £55.7bn in 2015 to around £100bn, has “no clear end in sight”, a cross-party committee of MPs has warned.

Cost pressures from Covid, little progress over plans for the new terminal at London’s Euston station, and a lack of clarity on other parts of the programme have left MPs “increasingly alarmed”, the House of Commons public accounts committee said.

It added that this “raised uncertainty over the promised benefits” of the planned 250mph railway.

Concerns are growing within the Treasury over the cost pressures on the UK’s most expensive infrastructure project ahead of the multiyear spending review next month.

There’s actually no clear end in sight in terms of the final cost, or even the final route

Dame Meg Hillier MP, chair of the public accounts committee, said: “HS2 is already one of the single most expensive taxpayer-funded programmes in the UK but there’s actually no clear end in sight in terms of the final cost, or even the final route. The project was plagued by a lack of planning and transparency from the start and there are many difficulties ahead.”

Construction of the first 140-mile phase of the line, from London to Birmingham, began in August last year after more than a decade of planning.

HS2 Ltd, the arms-length government body charged with delivering the railway, says that it has spent £11bn to date and used £0.4bn of its contingency, out of a total budget of £44.6bn in 2019 prices for the first phase. It says it has completed 20 per cent of the work and considers the budget for the first phase “realistic”.

“Although there have been challenges — particularly relating to the pandemic — the project remains on budget. HS2 is now supporting over 20,000 jobs and providing work for thousands of UK businesses, helping the economy to bounce back after Covid,” HS2 said.

But the public accounts committee warned that a substantial amount of the first phase still needed to be procured and that, given there had been no decision on the design of the London terminus at Euston, this raised questions over the £2.6bn allocated for the station.

Although the government has agreed that the first phase could instead open in west London, with services from Old Oak Common to Birmingham starting at some point between 2029 and 2033, this would severely curtail the railway’s benefits unless Euston was connected soon, the committee said.

The costs and plans for the second, northern, phase of the project, which would run between Birmingham and Manchester and Leeds are also unclear, the committee said. This means the “total-wide estimate of building the entire railway is far less certain” the committee’s deputy chair, Sir Geoffrey Clifton-Brown, said.

Neither HS2 nor the Department for Transport had managed to tell the committee “how they will ensure delivery of the range of benefits government has promised to the people, communities and businesses along the route”, the MPs added.