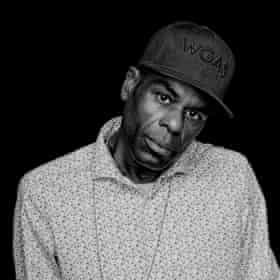 One day when I was around 11, I had to take a day off school. I had asthma and felt rotten, but I also felt ashamed about not being well. Mum decided to take me out to cheer me up. She took me to an auction – it wasn’t anything special, just one of those local things that would be advertised in the papers back in the day. She was hoping we might find a bike, probably just to stop me crying because everyone else had one and I felt left out.

We took a bus to the Royal Horticultural Halls in Westminster and arrived late. Almost everything had gone. There were no bikes left. I was despondent. Mum was gunning for anything to cheer this moany kid up when a Kodak Instamatic went up for sale. I wasn’t convinced, but she persuaded me we should get it. By the time we’d got back home, it was an obsession – the best toy I’d ever received.

I didn’t even take pictures at first. Mum said she wasn’t going to buy me any more film, so I was terrified of wasting the few shots I had. But the camera lens became my way to frame and visualise the world. I built a baby darkroom in a cupboard and started printing from the age of 12. It changed my life.

A few years later, in 1983, when photography was still just a hobby, I heard about an exhibition curated by the Association of Black Photographers. Its theme was young black artists’ interpretations of their mothers and fathers. I wanted to enter but I was really shy. Shooting friends and family is weird – it’s much easier working with strangers.

She was always proud of her place in the world, whether working on the buses or wearing a beautiful blouse

I left it to the last minute to ask Mum, but as soon as I did she was so excited. “Let’s do it now because I’ve got to go to work,” she said. She assumed the pose, I got my shot and, most importantly, I got the thumbs up from her. It only lasted a few minutes, but it was a perfect mother-and-son moment. There aren’t too many of those.

The shot represents my mum to a T: I’ve always known her as a proud black woman, the archetype of the post-Windrush generation: upright, well-dressed, positive and helpful. She came over in the early 1960s and was always proud of her place in the world, whether working on London’s buses, or wearing a beautiful blouse. Most of all, she was proud of her Jamaican passport with that little Commonwealth stamp that meant she was a citizen of the United Kingdom.

I didn’t understand at the time how transgressive this image is. For people of her generation and background, it was axiomatic that you do not show your passport to anyone – let alone have it photographed. Everything about this shot is like, “Well, I’m going to break every rule and make sure everyone knows who I am.” I only realised that later, but I think it adds another layer to this image.

The Victoria and Albert museum tweeted the shot on International Women’s Day. ‘Oh,’ she said, ‘not that photo again!’

Perhaps it’s strange that I have picked this picture. A lot of people are probably more familiar with my other work – whether presenting Dance Energy for the BBC back in the 1980s, or shooting parties and gigs for the Face and i-D, or my work as a DJ. But I had to choose Mum. She’s the most important person in my life and I wouldn’t be the man I am today without her.

This photo has had an amazing afterlife. It has appeared in so many shows over the years, from Staying Power, a celebration of Black British Culture at the V&A in 2015 to Somerset House’s Get Up, Stand Up Now in 2019. The V&A even tweeted it out on International Women’s Day. “Oh, not that photo again!” is now my mum’s standard response. But I’m proud that it is still getting attention.

It feels like my generation of black photographers are finally getting the recognition they deserve. When I started out, there were so few of us. I remember walking into an editorial meeting and the editor saying: “Oh! I didn’t realise you were black!” I never gave a fuck, but I think maybe I didn’t realise how few of us were working in photography and the arts. There’s so much more colour in the world now. And I’m still out and about, still shooting. Every time I head out, it feels like a new beginning.

Born: London 1966.
Trained: Mostly self taught, plus a photographic laboratory skills course at Kingsway Princeton College, London (now Westminster Kingsway college).
Influences: Family, music, street culture, Horace Ové, Don McCullin and the outdoors.
High point: “Having seven of my images acquired by the V&A for its Staying Power collection.”
Low point: “A fire at my studio that destroyed my antique camera collection as well as negatives, colour slides and other important property, but also knowing that it could have been me that perished.”
Top tip: “Follow your instincts and be nice to others.”

Tales of Normski is at Smokey Tails, Hoxton Square, London, 7 September to 2 October.