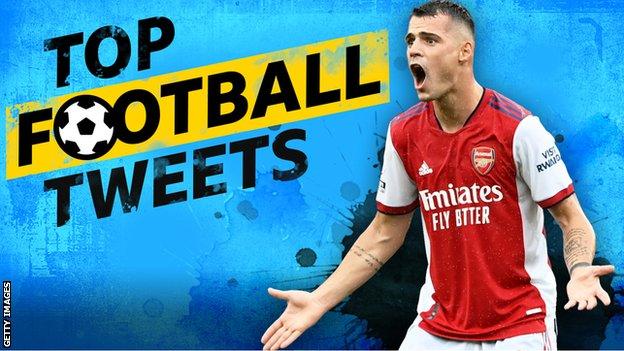 Chelsea dominated Arsenal at the Emirates

Back-to-back losses for Arsenal left them open to ridicule, even in the Russian Premier League. Plus, some of the scenes in France were not Nice to see – if you get our gist.

Here are just a few of the best tweets from the weekend’s footballing action.

Fans on Tyneside may have been grateful in the end not to have to watch Newcastle United’s 2-0 loss on the road to Aston Villa in high definition on a widescreen television.

Meanwhile, we’re glad that Danny Ings’ transfer to Aston Villa has made this score graphic possible.

3. All roads lead to Rom

Romelu Lukaku was ‘unplayable‘ as he returned for Chelsea, whom he last played for 10 years ago. He scored the opening goal as the Blues beat Arsenal 2-0 at the Emirates on Sunday.

4. Shots fired at the Gunners

Meanwhile, everyone online seems to be having a good laugh at poor old Arsenal, who have lost their opening two games.

Spartak Moscow, who drew with Russian Premier League side Arsenal Tula on Saturday, even piled in on the north London club.

5. Harry Kane runs down the clock

Kane finally returned for Tottenham Hotspur on Sunday, after an extended summer break.

There has been plenty of speculation surrounding his future in recent weeks, with many believing his absence from training signals that he wants to move to Manchester City.

After an incredible opening game to the new season, where they beat Leeds United 5-1, Manchester United were slightly underwhelming in their draw with Southampton on Sunday.

Many seemed to blame the midfield.

In Ligue 1, Nice v Marseille had to be abandoned after fans stormed the pitch. The trouble started after Marseille’s Dimitri Payet retaliated to being struck in the back by a bottle thrown from the home supporters.

Some of the Marseille players were reportedly injured in the trouble and refused to return to the pitch after a long delay.

Liverpool hosted Burnley on Saturday, who have often been accused of not playing a very modern style of football. Their use of 1-11 shirt numbers, however, is a throwback that we’re sure everyone can appreciate.

9. Ripping up the rulebook

Meanwhile, Bologna manager Sinisa Mihajlovic is carving out the future of managerial fashion in Serie A. Gone are the days, it seems, when football managers had to choose between the formal suit or the club shop tracksuit and cap.

Miguel Azeez arrives at Portsmouth ahead of loan, with several Arsenal youngsters set to leave

Thanks to Hampstead and Highgate’s campaigner and community