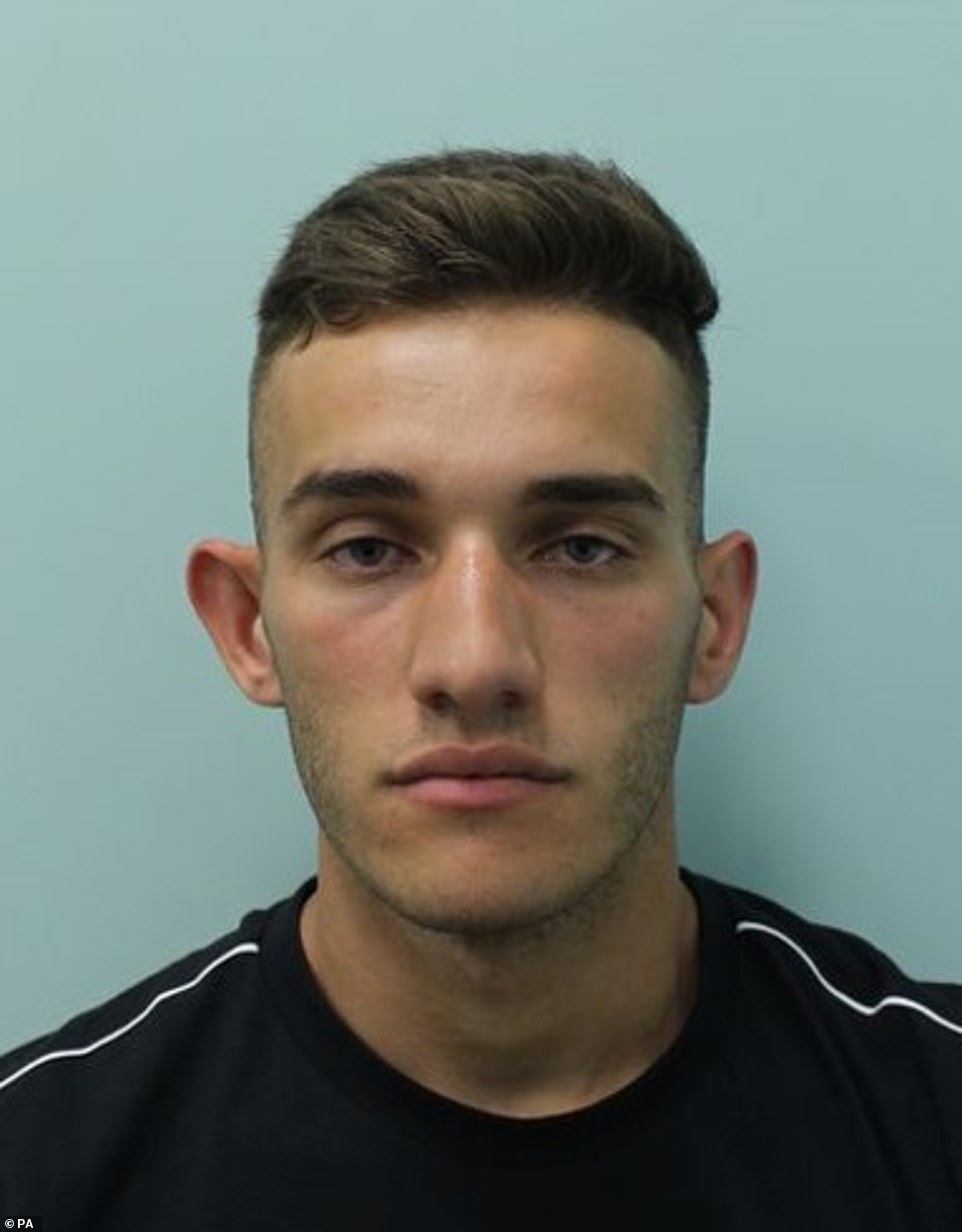 This is the moment an illegal immigrant cyclist fled after causing the death of a hospital worker after crashing into him running a red light.

Albanian Ermir Loka, 23, mowed down Peter McCombie, 72, at around 15mph as the HR administrator was making his way home from the Royal London Hospital in Whitechapel.

Instead of apologising to his victim he pointed to his damaged bike declaring ‘Look at what you’ve done!’ before running away.

The CCTV of Loka has been made public today as he was jailed for two years, after his trial heard he fled because he feared being deported.

But because he has already been in custody awaiting trial for a year he could walk free, as it is taken off sentences and prisoners are usually freed on licence halfway through their terms.

Mr McCombie’s family said in a statement: ‘He left Peter laying in a busy road, seriously injured, and thought only of himself at that time.

‘That kind of cowardice is beyond contempt. The anger we feel towards him is beyond words. We cannot even bear to say his name.’

Mr McCombie’s head hit the pavement so hard it fractured his skull and damaged his brain.

He also suffered a fractured jaw bone, a broken rib and bruising to his legs after the collision on Bow Road last July 3.

Veteran NHS staffer Mr McCombie was taken to hospital for treatment, but died from his injuries eight days later despite the valiant efforts of medical staff, Snaresbrook Crown Court heard. 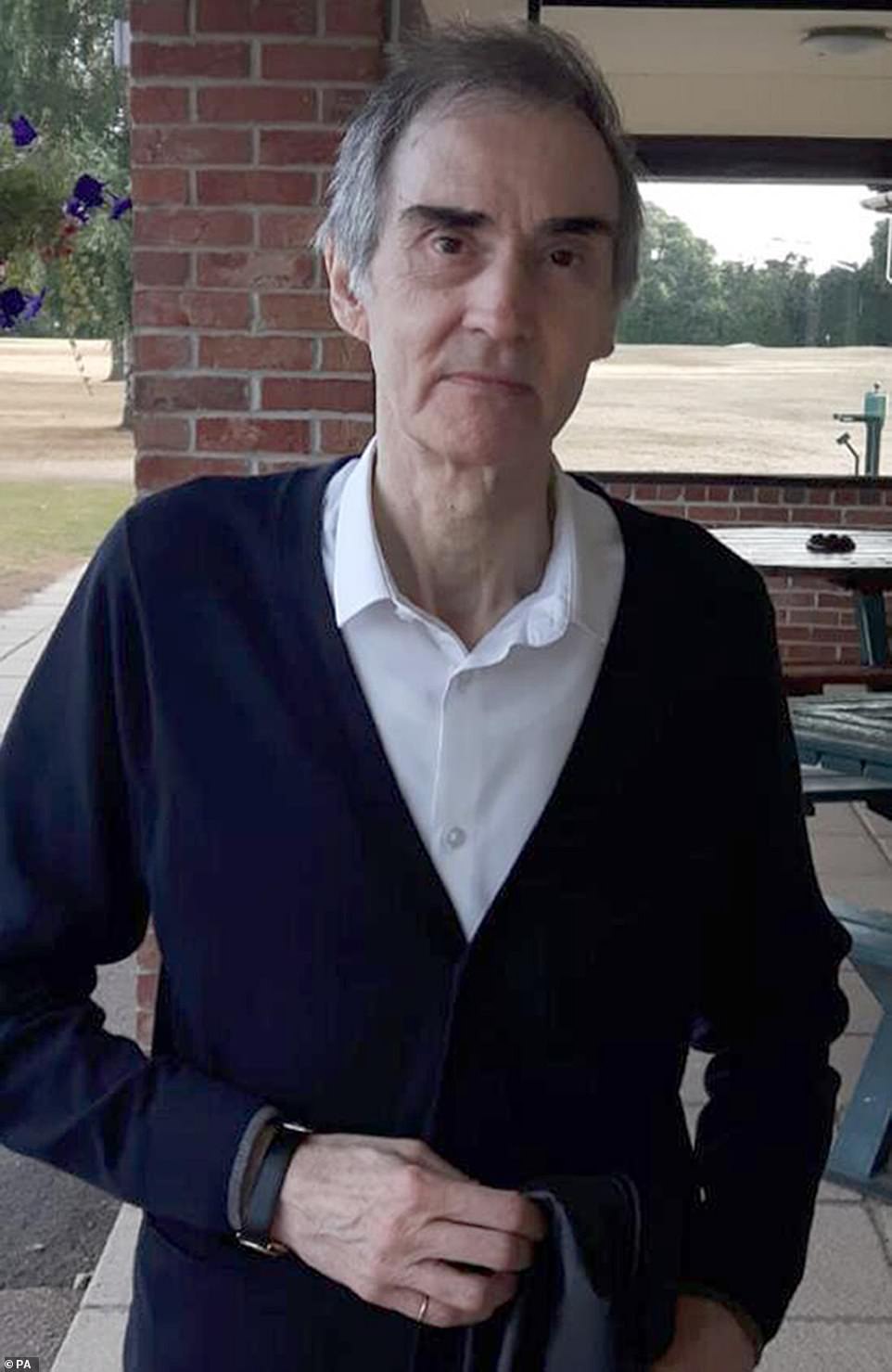 The trial heard Rebecca Guyther was walking down Bow Road with her daughter when she saw the collision and called for an ambulance.

In a witness statement, she said: ‘He was pointing at his bike and saying something like, “What were you doing?’ and things like, ‘Look at what you’ve done!”.’

‘The man on the floor had his eyes open but was not saying anything.’

Ms Guyther added: ‘I saw the cyclist’s face and he looked angry.’

Loka, who is originally from Albania, was cleared by a jury of manslaughter but convicted of causing bodily harm by wanton or furious driving earlier this month following a retrial.

The builder received the maximum sentence for the offence of two years but could be released imminently as he has been in custody since he turned himself in to police a year ago.

Deanna Heer, prosecuting, said the traffic lights had been on red for over five seconds as Loka approached the pedestrian crossing.

‘However, the defendant did not stop. Instead, he continued through the red lights and crashed into Mr McCombie causing him to fall to the ground and hit his head. 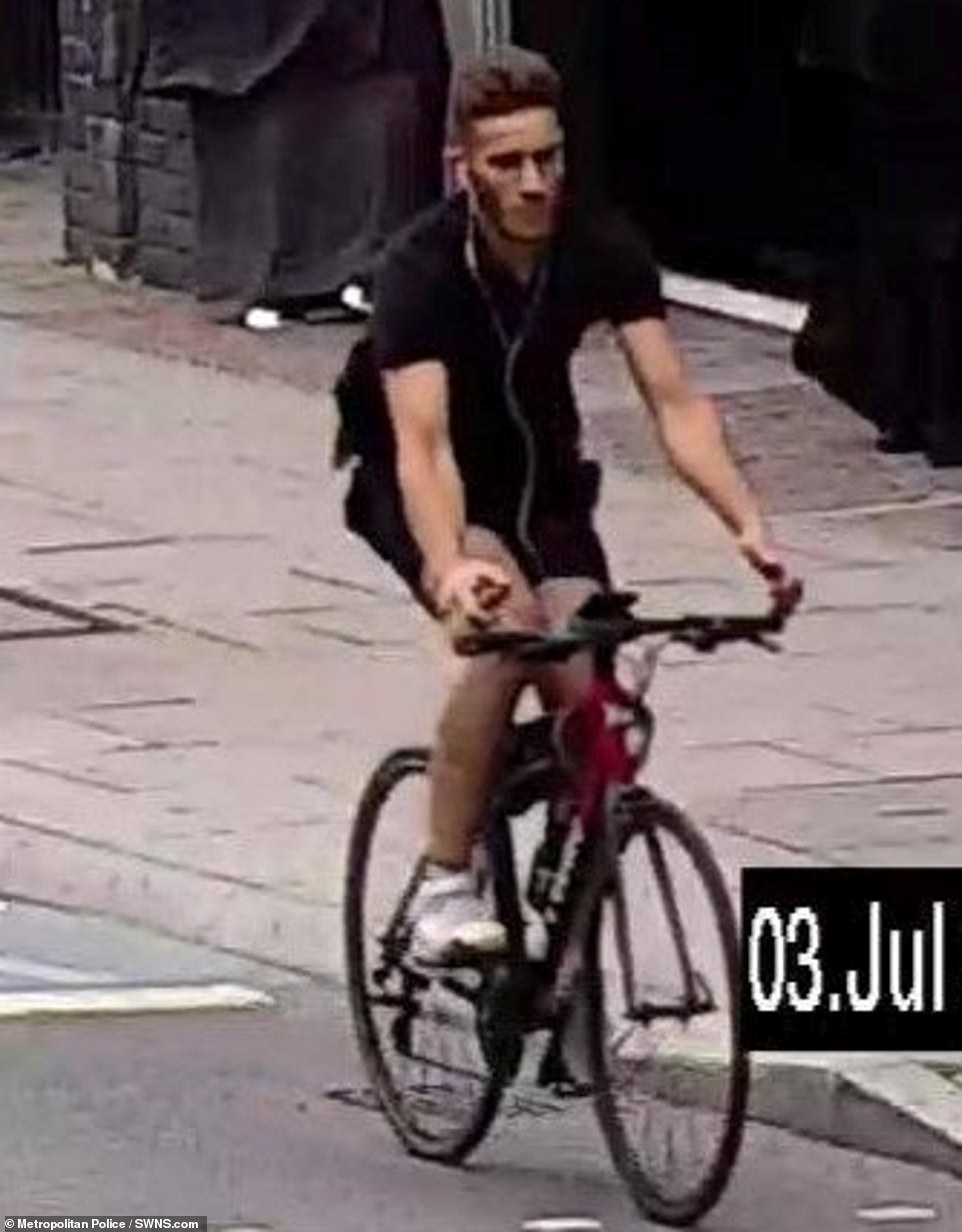 Ermir Loka, pictured with headphones in, on his bike just before the incident in London in this image released by Met Police 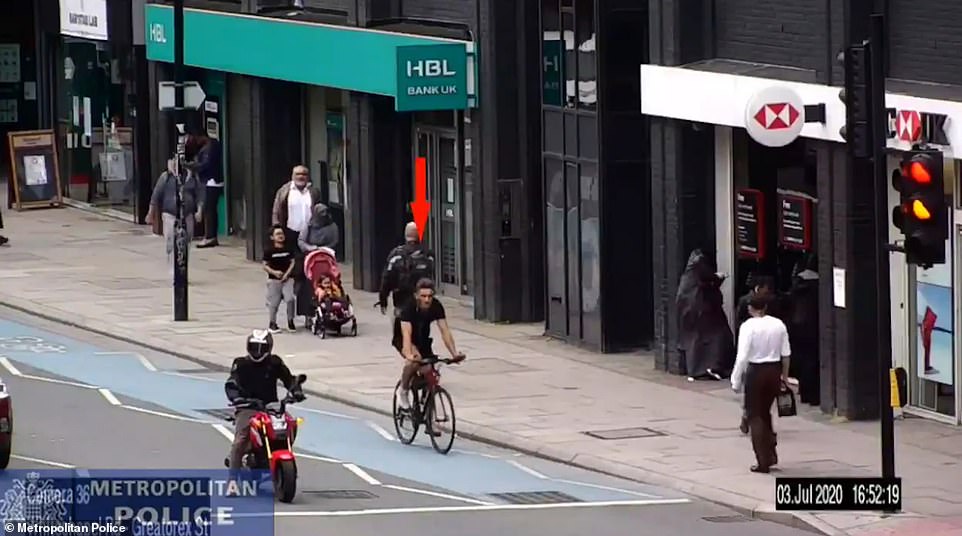 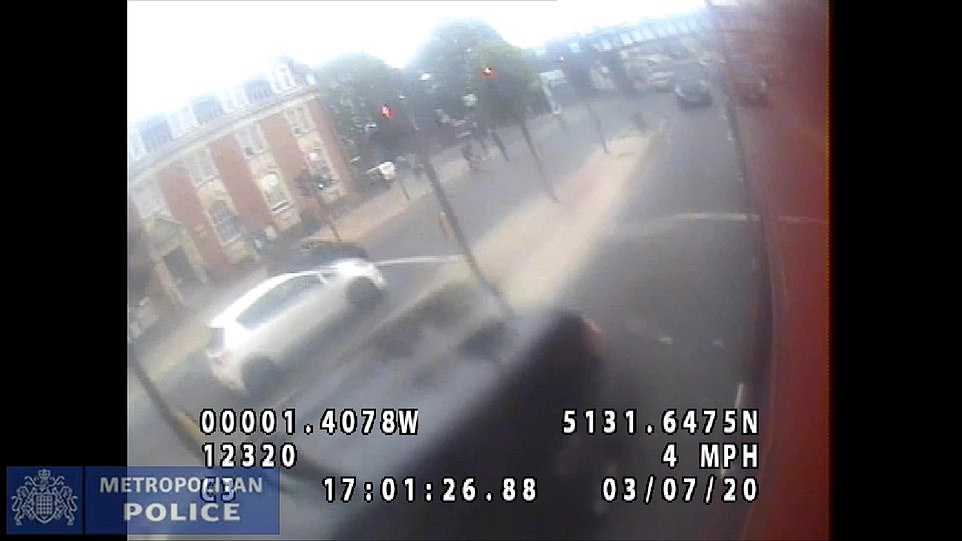 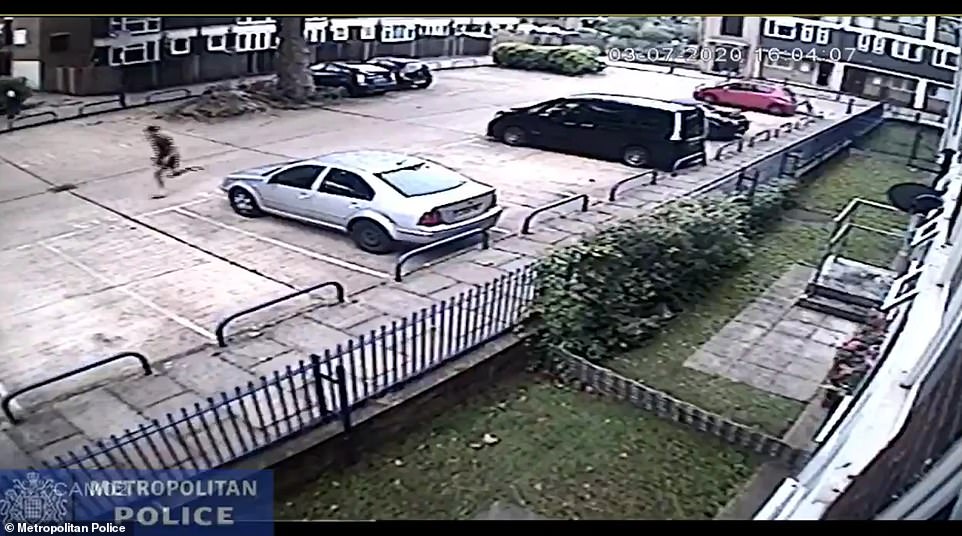 ‘As a result, his skull was fractured and he suffered severe brain injuries from which he died a few days later.

‘As he lay on the road unconscious, the defendant picked up his bike and cycled away leaving others to call an ambulance for Mr McCombie.’

‘Mr McCombie suffered fractures to his jawbone, one of his left ribs and bruising to his left leg.

‘He fell to the ground which caused his skull to have multiple fractures and his brain to be badly damaged and bleeding.’

Loka fled and CCTV stills of the cyclist were circulated by police.

He abandoned his bike but handed himself in to Leyton police station on 28 July after a friend confronted him about the crash, the court heard.

Giving evidence Loka said he panicked and fled the scene because he believed the police would discover he was in the UK illegally.

Loka claimed he was working long hours at a building site and at a Turkish restaurant, and only getting three hours sleep a night in the week leading up to the incident.

Asked if he rode through a red light Loka insisted: ‘No, the first and main point is that it is a dangerous thing to do, which has risks for yourself. 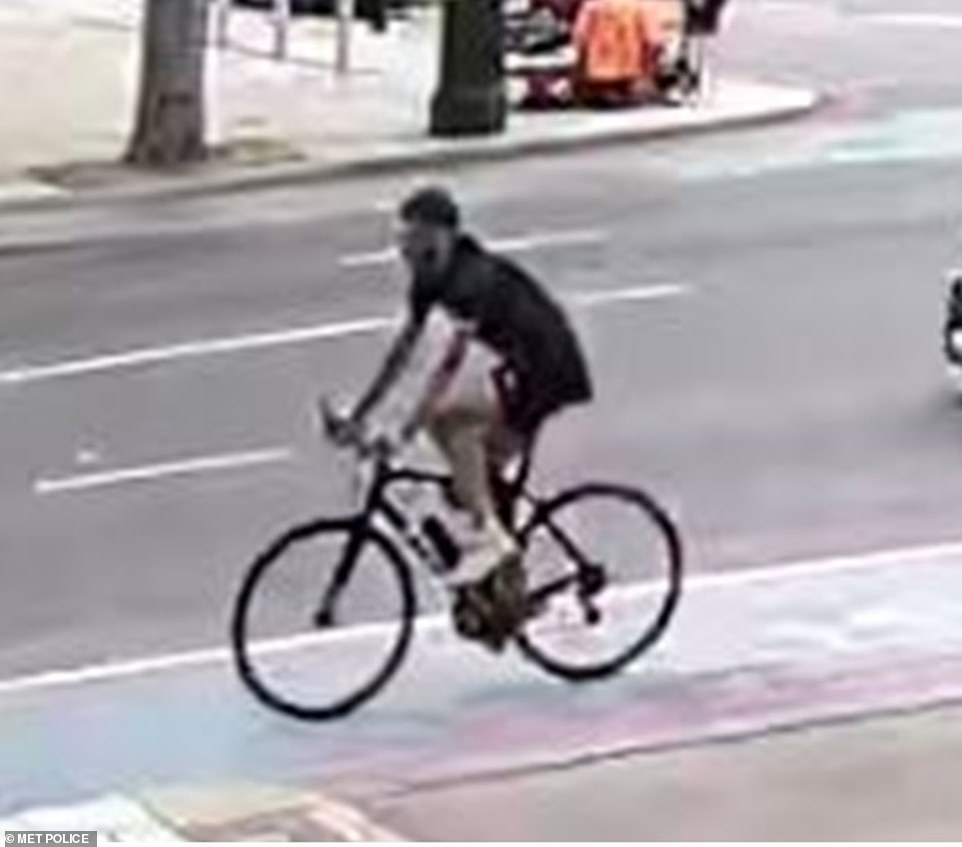 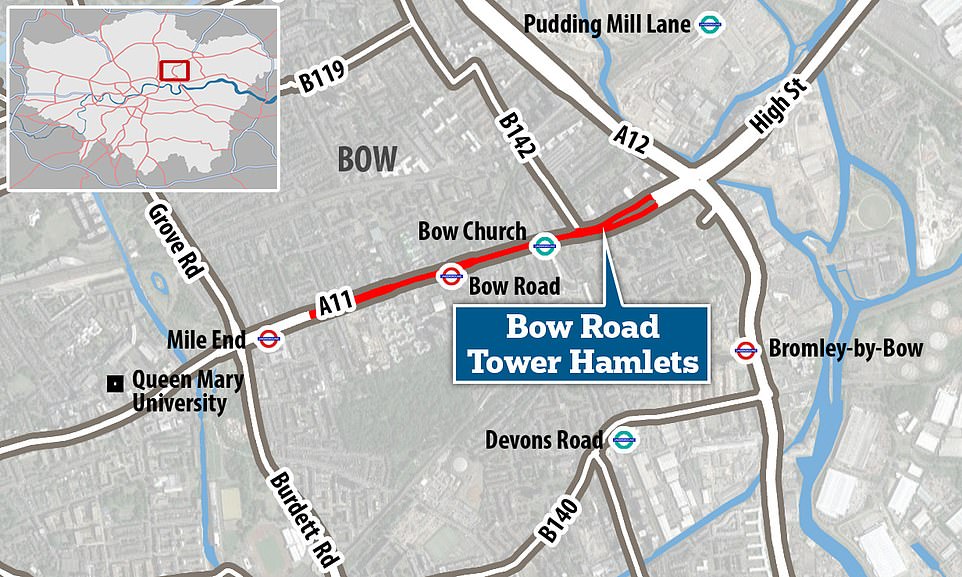 Mr McCombie was struck in Bow Road, close to Thames Magistrates’ Court, on July 3 as he walked home after a day’s work

What is the law for cyclists who run into pedestrians?

Kim Briggs, 44, was crossing the street when she was struck by Charlie Alliston’s bike, which it later emerged had no front brakes.

The Government is looking at a range of options to make the roads safer for pedestrians after a record number of pedestrians are being killed or seriously injured in crashes with cyclists.

In total, some 130 people were seriously injured in accidents involving cyclists last year, and four were killed.

More than ten pedestrians suffered life threatening injuries every month when they are hit by people on bicycles.

The issue of pedestrian and pedal cycle safety was highlighted when cyclist Charlie Alliston, 20, was jailed for 18 months in 2017 for knocking over and killing a woman as he sped through east London.

His victim Kim Briggs, 44, was crossing the street when she was struck by Alliston’s bike, which it later emerged had no front brakes.

Mrs Briggs’ widower, Matthew, from Lewisham, south London, has called for a ‘radical change’ in cycling culture and the introduction of new laws, including the offence of causing death by dangerous cycling.

In August last year Sakine Cihan, 56, was killed after being struck by an electrically-assisted bike in Dalston, London. A 30-year-old man was later arrested by police in connection with the crash.

Following the jailing last year of Alliston for the death of Mrs Briggs, the Department for Transport announced an urgent review examining whether new laws should be brought in to cover dangerous cycling.

The Victorian legislation, originally drafted to deal with reckless handling of horses, was used because there was no cycling equivalent to the offence of causing death by dangerous driving.

‘There is also a possibility that someone will be crossing the road and you might hit them, you can cause an accident and many other things.

‘I did not deliberately go through the red lights.

‘I saw that the person was frozen in place and I tried to swerve to the right, but I just could not manage instinctively to copy what the cyclist in front of me did, I just didn’t have time to do it.

‘I tried to go for the brakes but I didn’t manage to press them.

‘I fell to the ground face down, for next 2 or 3 seconds I was lying on the ground, I couldn’t understand what happened.

‘Then I got up, I looked to my left, I could see the man lying down, I could see his eyes were open and he was wearing a mask.

‘I had a very short time to think about what to do, and seeing that the accident happened in the middle of the road, and the police would be there within 2 or 3 minutes and would stop me and find out I was here illegally.

‘Thinking it was not a serious accident with the police, hoping that the gentleman would get better, I decided to leave, I had only a few seconds to think, it was split second decision.

‘I have done wrong, I have not right thing, I was a coward, but it happened, what happened happened.

‘I do not blame Mr McCombie.’

Asked why he did not check to see if Mr McCombie was OK, Loka replied: ‘I was in a state of shock, I didn’t know how to react, how to touch him or talk to him, the only thing that came to my mind was to leave.’

Mr McCombie’s family said in a statement: ‘Peter’s loss has been immeasurable and has left a gap in our lives that we will never be able to fill. He was a man who loved his family, who had time for his circle of valued friends, and worked hard for his colleagues. He was a complete gentleman and everyone that knew him has been united in grief at the manner in which he was taken from us.

‘The shock of losing him so abruptly, so suddenly, so unnecessarily, is something that will haunt us for a very long time to come. Peter still had so much left to do and enjoy with us and we have been robbed of that by the actions of this selfish man, who cycled into him and then immediately got up and fled.

‘He left Peter laying in a busy road, seriously injured, and thought only of himself at that time. That kind of cowardice is beyond contempt. The anger we feel towards him is beyond words. We cannot even bear to say his name.

‘He denied his actions and put us through the trauma of a trial, where we saw exactly what happened and lived our grief again and again. His actions are unforgiveable. We are glad that the jury saw through his lies and that he has been convicted.’

Detective Sergeant Eddie Coleman said: ‘Peter McCombie was a fit and active man who had had continued to work well past his retirement age. He was much loved by his family and friends and well liked by his colleagues.

‘My sympathies remain with Peter’s family, who have been through so much and supported us so steadfastly throughout our investigation and this trial. I would like to thank them for their courage and bravery and hope they know we have done the best we could for them, and for Peter.

‘It can only be said that Loka’s actions were reckless and dangerous and entirely avoidable.

‘If Loka had only just slowed and stopped at the red traffic light, we would not be here today.’

He was cleared of manslaughter but convicted of the lesser charge following a retrial. The first jury had failed to reach verdicts in March