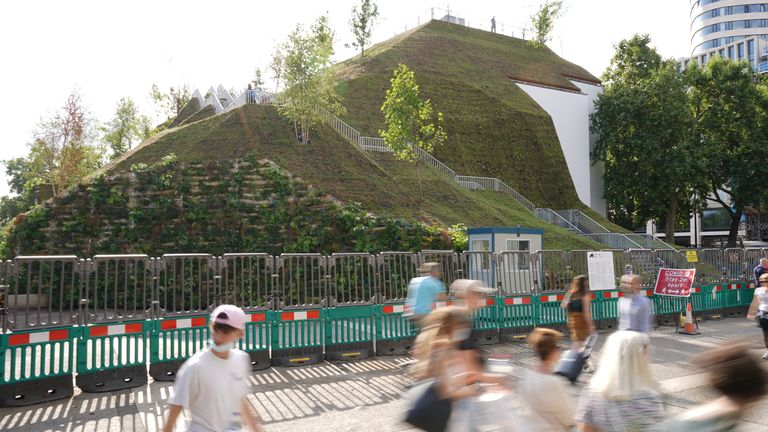 Refunds are being offered to people who have bought tickets to visit the new £2m Marble Arch Mound in London following a stream of complaints.

The temporary 25-metre mound includes a deck providing views of the West End – but Westminster Council has been forced to admit that “elements are not yet ready for visitors” with people complaining about ongoing work and calling it a “waste of money”.

Planned by Dutch architect company MVRDV, the mound is designed to increase footfall in the shopping district as lockdown restrictions ease.

Image:
People who have seen or visited the mound have complained about the landscaping and the money spent on its construction

But critics on social media who have already been to the attraction have called it the “worst thing” they have done in London, while others have compared the landscape to a platform on a game of Sonic the Hedgehog.

Some asked why so much money had been spent on constructing a temporary mound in the capital during a “climate emergency” when it is free to climb countless other natural hills and mountains across the country.

In a statement, Westminster Council said: “We are aware that elements of the Marble Arch Mound are not yet ready for visitors. We are working hard to resolve this over the next few days.

“The mound is a living building by design. We’ll continue to adapt and improve London’s newest outdoor attraction and resolve any teething problems as they emerge.

“We’re sorry for the delay and look forward to welcoming visitors when they’re ready to enjoy all the mound has to offer.”

The council said it was “offering anybody who has booked a visit during the first week a return ticket free of charge so that they can enjoy the full experience and the landscape once it has had time to bed in and grow”.

It added that “people who are booked for the rest of the week (including the weekend), will be contacted and offered a refund and a free return ticket so they can see the mound at its best”. Image:
The summit of the new 25-metre artificial mound has been built on a scaffolding base

Giving views of the capital’s Oxford Street, Hyde Park, Mayfair and Marylebone, the mound is due to be open until next January.

It was also designed to introduce more landscaping and trees “to an area suffering from traffic pollution” and to be sustainable.

The artificial hill has been built on a scaffolding base, with layers of soil and plywood forming the mound which has a hollow centre with space for exhibitions and displays.

Once dismantled, the trees and landscape are set to be relocated to other parts of the local community.