A former south east London-based pastor, who has seen ‘too many young people to count’ lose their lives to violence, wants to empower communities to be part of the solution to tackling youth violence.

Ben Lindsay, who grew up in Greenwich, worked as a pastor in New Cross for twelve years. Before that he worked in the youth offending service, community safety teams and the mental health service.

But about six years ago, something shifted for him.

“During my time as a pastor, I saw too many young people to count lose their lives to violence,” Ben explained.

“But then in 2016, a young man who I’d known since he was a baby was killed – and it just hit differently.

“At his funeral, his best friend gave a euology. And then he lost his life in Peckham five months later.”

Exclusive: Lisa’s done it! One woman’s struggle to get vital stab wound kits into Peckham

This led Ben to want to address this issue of violence affecting young people more directly. With his background he had the experience, but he wanted to empower the community to be part of the solution.

In 2019, he founded Power the Fight – a UK-wide charity currently based in Peckham that works to end youth violence by helping communities who don’t feel equipped to deal with these issues when working with young people.

“I do think the issue is getting worse,” Ben said.

“We can’t just focus on fatalities. Hospital admissions for stab wounds has risen. The types of weapons kids are getting hold of is getting worse. And the youth provisions are no longer there,” he explained.

“When I was a youth worker, back in the early 2000s, there was money available.”

Ben points to austerity as a reason for the increase in youth violence we’ve seen over the last ten years.

Since 2010, there has been over one billion pounds worth of cuts to youth services, which Ben said has impacted youth work, youth services and mentors.

“If you take all those resources away from young vulnerable people, you’re going to see an increase in violence,” he said.

“Often it’s on the way home from school when kids find themselves in trouble. And yet, time, energy and resources is really lacking during those times.”

Ben said that this is where Power the Fight comes in. “We want to be the bridge between the community and policy makers.

Power the Fight equip those who work with young people with the tools to be more positive forces in their lives.

“One of the things we do is train anyone whose front-facing with the issue of violence – like teachers, NHS staff, police officers, faith groups, community workers.

“We train them on things like contextual safeguarding, violence against women and girls, and cultural sensitivity.”

They also have a program called TIP (Therapeutic Intervention for Peace) – which sees them work with teachers, parents and carers to help them to understand what young people go through: “Young people help to design this.”

Teenager stabbed near the Peckham Arch

Although most of their work is about prevention, the charity also provides financial support to families that have lost young people to violence.

“Losing someone impacts people in different ways and sometimes a safety net of money is needed for things like therapy, debt relief, court cases, time off work – that’s where a cheque can really help.” 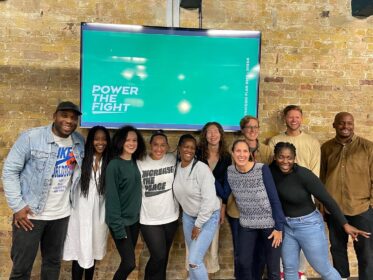 The Power the Fight team.

“We’ve done two fundraisers recently – one at the Prince of Peckham – which was amazing,” Ben said.

But the most recent was at the House of Lords – when they partnered with Lord Hastings and Dean Forbes, a tech millionaire from Catford, who this year was named as the most influential black man in the UK.

“Dean is the CEO of a billion-pound organisation: Forterro,” Ben explained.

“I connected with him and said I never see high net-worth individuals engaging with this sort of thing – and he’s local, so he’s aware of the issue.

The evening involved talks from different speakers, including parents who had faced youth violence, as well as an auction: “Idris Elba donated some VIP tickets to a show and Rio Ferdinand donated some tickets and a Man United shirt.”

“That was the first time (Power the Fight) have been able to bring in so many influential people in one room, and I hope it’s not the last,” he added.

Ben also sits on the Mayor of London Violence Reduction Unit and the Youth Violence Commission – using his knowledge and experience to advise policy-makers to address the ever-present issue.

For more information about what Power the Fight do click HERE.

To listen to their podcast ‘Power Talks’ click HERE.