The slithery stowaway could have been on the carriage ‘for some time’ before it was discovered (Picture: Gareth North/Mitcham Zoo/SWNS)

A four-foot snake – native to US states such as Louisiana and Florida – has been found on a train travelling around south-east England.

The reptile was hidden for ‘some time’ before being discovered.

It was spotted slithering along the carriage of a Southern Rail train by staff at the Selhurst Train Depot in Croydon, south London, last week.

The service had been travelling between London, Kent and Sussex for weeks until the unexpected stowaway was discovered.

British Transport Police officers were called by rail staff who had managed to corner the warm-blooded animal and get it into a bag.

The snake caused a stir at the depot, with officers reportedly getting spooked and ducking for cover during the rescue.

Gareth North, from the nearby Mitcham Zoo in south London, was then called up to help.

Mr North, 50, said: ‘The engineers informed me the police were on the scene on the carriage after the report of the snake. I was told they ran off the train scared when they saw it. 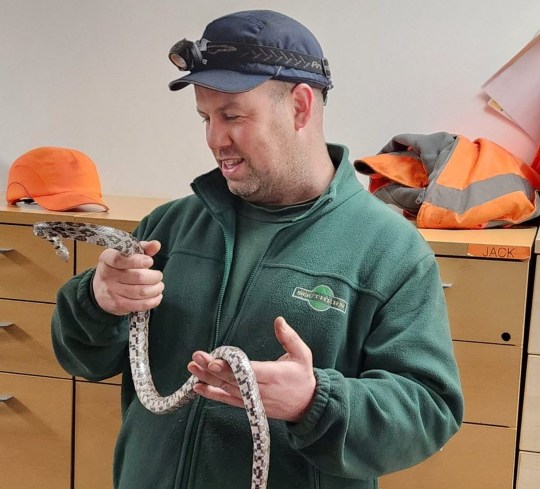 ‘It’s a four-foot corn snake, its sex is currently unknown.’

The snake was found with superficial injuries from being trapped in a heat grate it is thought to have squeezed through to find warmth during the recent cold snap.

These wounds suggested the snake had been riding the train for a few weeks, Mr North said.

It is thought the snake may have escaped from a container a passenger was carrying on the train, but it’s exact route onto to the carriage is not fully known.

Mr North added: ‘There are possibly two reasons its managed to escape on the carriage. 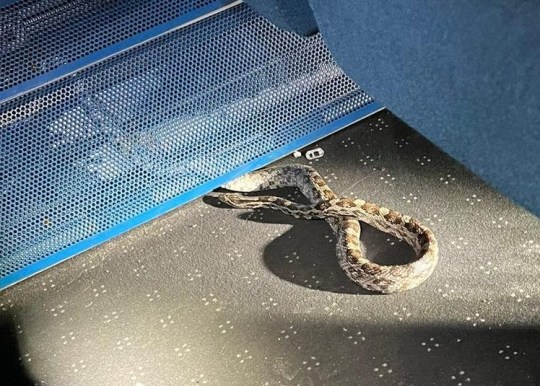 The snake may have escaped from a bag (Picture: Gareth North/Mitcham Zoo/SWNS)

‘Firstly, it escaped from a travel container or bag while being transported by its owner – this is the most likely reason.

‘Or it has been dumped on a train hoping it is found before it gets cold.

‘This is highly unlikely as abandoned or dumped reptiles are less than one per cent with the data the National Centre for Reptile Welfare has taken.’

They are usually found in the US. They can be seen in Southern New Jersey, Louisiana, parts of Kentucky and Florida, where they are most common.

Luckily they are neither poisonous nor venomous.

A spokesman for the BTP said: ‘Officers received a report of a snake on a train at Selhurst Train Depot at 9.26pm on December 16.

‘Once it was identified as a non-venomous corn snake, officers and staff removed it from the train.

‘It was placed in a box and kept in a warm office as it waited to be picked up by a member of staff from Mitcham Zoo.’

The snake is currently at the zoo where Mr North and his team continue feeding it and keeping a check on its injuries.