Stonemasons have been giving young people the chance to work with them in restoring a historical art deco arch in east London, instilling local pride in one of the capital’s most deprived boroughs.

The arch in Stratford is all that survives of Queen Mary’s hospital for the East End, opened in the 19th century for the local population who worked in factories and workshops, where accidents were common. It was described by one contemporary as “a lighthouse in a neighbourhood without illumination” until it was badly damaged during the second world war and, ultimately, demolished in 1983.

Somebody had apparently decided to save the arch, however, which had been reduced over the decades to a sorry state, cracked and stained, its lettering obliterated and plants growing from the top. It had also been moved around the corner, next to a housing estate.

Now 110 local youngsters, aged between nine and 17, have helped with its renovation, which was unveiled on Thursday as part of a pioneering arts youth programme that has involved more than 3,000 young people over the past two years.

Nicola Stacey, director of the Heritage of London Trust, the charity behind the scheme, said that having large numbers of youngsters holding chisels and other stonemasons’ tools drew the uneasy attention of the police: “This part of Stratford has a very high police presence and, on numerous occasions, the police came to break up what they thought was a fight, but it was just kids learning about their local history.”

She said teenagers were usually offered football or boxing to keep them off the streets, but that they had been inspired by the chance to learn about their local history in such a hands-on way.

“The arch is in Newham, one of the most deprived London boroughs, which has had massive issues with gang violence,” she added. “There have been desperate cries for young people to be given ‘diversionary activities’. This particular project is a really interesting way to engage young people.”

The hospital was opened in 1861 by a local doctor, William Elliott, as the West Ham, Stratford and South Essex Dispensary. In 1916, Queen Mary became its patron, visiting repeatedly over the subsequent decades. In the aftermath of the 1953 Stratford train crash, the hospital’s nurses and doctors were among those who rushed into the tunnels to tend to casualties, crawling into the wreckage. 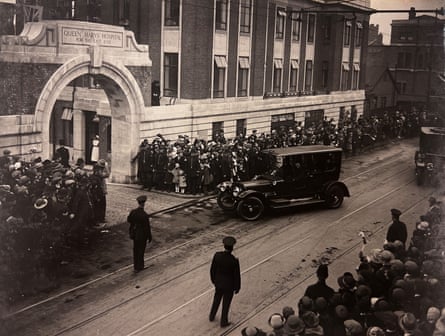 Queen Mary makes one of her visits to the hospital. Photograph: Heritage of London Trust

Stacey said: “Nothing at all survives [of the building] but this arch, engraved with the lettering: ‘Queen Mary’s hospital for the East End.’ The lettering was totally eroded and illegible; buddleia was growing out of the top; no one knew what it was until we started the restoration. It was in a terrible state. We’ve recarved the lettering. We’ve studied all the original archives and old newspapers. It now looks fantastic. It’s a spectacular piece … The arch was designed in a modern classic art deco style with geometric scrolls, using newly fashionable cast-stone blocks. Its elegance perfectly conveyed the hospital’s order and authority.”

Stacey, who previously worked at English Heritage, said: “Amazingly, it’s not listed, but we will get it listed now.”

The renovated arch was unveiled on 8 December at a ceremony attended by the charity’s patron, HRH the Duke of Gloucester, whose father was the hospital’s president for decades and whose grandmother was Queen Mary. Many local people are NHS workers and some attended the ceremony, alongside the youngsters who had worked on the renovation. 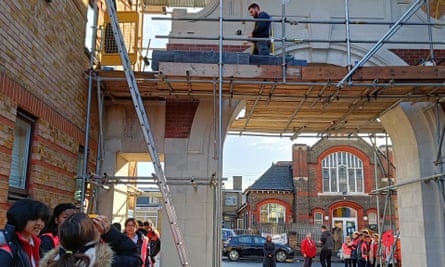 Heritage of London Trust restores buildings and monuments that tell the story of the city and its people. Stacey said of its Proud Places youth programme: “One of our key aims is to broaden interest in heritage, especially with young people in tough parts of London.

“There is no reason why it can’t be replicated elsewhere. There’s nothing being done like this. Nowhere else are young people being invited to take part in these grassroots heritage projects on their doorstep, told the history of lost buildings, get the chance to meet all the craftspeople and be part of the launch at the end. It just has a really profound effect on them.”

One of those young people, Ben Thomas, 16, said: “It’s not the wealthiest of boroughs, so there’s a lot of stuff that goes on here. But being able to look at a place and be proud of it … brings that sense of community back and makes people feel proud to live here.”