As Morocco’s Zakaria Aboukhlal prostrated himself on the manicured football pitch on Saturday after his side became the first African or Arab country to reach the semi-finals of a World Cup, the streets of London erupted in celebration as supporters basked in the Atlas Lions’ historic triumph.

On west London’s Golborne Road, women wearing hijabs roared with jubilation as they raised their arms in the air with red and green Moroccan flags fluttering like sails behind them.

Chants of “Olé, olé, olé” and the explosions of fireworks could be heard on Edgware Road, where traffic came to a standstill and even sub-zero temperatures could not stop ecstatic fans from taking to the streets to dance and sing.

From Ladbroke Grove to the Damascus Gate in Jerusalem to Baghdad, Morocco’s victory has been a collective cause to celebrate for the African, Arab and Amazigh diaspora.

The triumph has brought joy to spectators around the world in the form of Moroccan matriarchs who have become the unofficial champions of the 2022 World Cup.

Videos of the forward Sofiane Boufal dancing with his mother after Saturday’s quarter-final victory against Portugal and the PSG defender Achraf Hakimi’s mum giving him a kiss on the cheek after his winning penalty against Spain in the last 16 have garnered global adulation.

As the daughter of Moroccan immigrants who helped found the first Moroccan community centre in the area, the 42-year-old said she was overjoyed to see women who looked like her mother “at the forefront of everything”.

“It makes us proud,” Boujettef said. “Our parents, especially our mothers, they are the rock of a Moroccan family.

“They came here in the late 50s and 60s. English was a barrier, but they integrated, and they built north Kensington.”

Some of the volunteers brought together former Grenfell Tower residents, as well as people in the area who had no connection to Morocco. “We were all Moroccan [for the game],” Boujettef added.

Revelling in the euphoric glow of Morocco’s latest victory, British-Moroccan fan Hashim Wahbi, whose parents are of Moroccan origin, celebrated on Sunday by marching through Piccadilly Circus dressed in the national team’s football kit while beating a drum.

Although Wahbi had spent many holidays in Morocco as a child, he felt disconnected from particular aspects of the country’s culture as a member of the diaspora. It was the national team’s victory that renewed his pride in his Moroccan heritage. “It brought my Moroccan identity to the forefront,” said the 29-year-old. 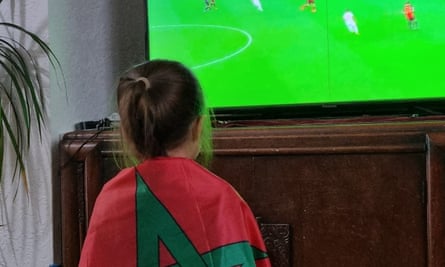 After their victory over Spain on Tuesday, social media was replete with historical jokes claiming “the winner gets al-Andalus” – the name given to the formerly Muslim-ruled area of Spain from which many Muslims and Jews were expelled about 500 years ago and fled to Morocco. “I think it’s kind of reconnected me again to the Moroccan community online,” Wahbi said.

As concerns have simmered recently over an increasingly rightwing Israeli government and its treatment of Palestinians, the Qatar World Cup has in its own way been eclipsed by the black, white, red and green Palestinian flag on its football pitches.

“It’s been really lovely that the support for Palestinians and the Palestinian flag has been at the forefront of this Moroccan story,” Wahbi added.

Wahbi, who has a young mixed-race daughter, said Morocco’s victory was especially important to him as a father. She has been a spectator of the matches along with the rest of the family.

“I feel it’s important to celebrate Moroccan culture and achievements,” he said. “And I hope it remains part of her identity when she grows.”