Elated French fans on both sides of the Channel roared with delight and threw dance moves after their team’s dramatic World Cup quarter-final victory over old rivals England in Qatar on Saturday.

At The Frog and Rosbif, a packed English-themed pub in Paris whose windows were decked with St George’s flags and tricolours, the predominantly French audience exploded with joy and belted out “La Marseillaise” at the final whistle.

“It’s brilliant! With the win everything is fine,” a relieved Jean-Pierre Agbo, 50, told AFP, after Olivier Giroud’s second-half header and Harry Kane’s late penalty miss gave the defending champions a 2-1 win and a place in the semi-finals.

Another France fan patted a nearby England supporter — slumped on the shoulder of his friend in despair — in mock consolation as hit pop songs and exultant dancers transformed the pub into a disco. 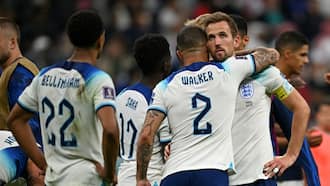 Kane will bounce back ‘stronger’ from penalty miss – Henderson

In London’s Zoo Bar, hundreds of French fans danced, screamed with joy and chanted “Bring the cup home” as France edged out their country of residence.

The pub had been booked out by France fans using a lifestyle app for French people living in the capital, with celebrating French supporters later descending on London’s Piccadilly Circus roaring La Marseillaise.

“It was a superb match. Now we’ll have to go out and give it to the English,” said 28-year-old Olivier Airault, who lives with two English flatmates.

Despondent England fans in Paris regretted what might have been after the Three Lions’ dreams of winning a first major title since 1966 were dashed — again.

“Our leadership was better. Any fan will tell you the referee was biased. A lot of decisions did not go our way,” Sam, 26, said after the final whistle. 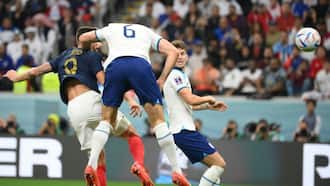 “They (England) played very well. I would be very happy if it wasn’t against the French, because I’m English!” said Tim La Fontaine, a 32-year-old IT worker who has lived in France for eight years.

“The French are lovely… but I have to go to the office on Monday!”

“It was a brilliant game. To experience it here in France as the underdog, it was an amazing experience,” added Sarah Turner, 32, saying Kane was under “too much pressure” to take two penalties — he had scored one early in the second half.

The friendly-natured English-French rivalry briefly turned violent in the Zoo Bar after Giroud’s winner and Kane’s missed spot kick, when an overexcited France fan hurled his beer at staff — and was unceremoniously dragged outside.

Kane’s second-half equaliser had given English fans hope of reaching a third consecutive major tournament semi-final, with cries of “It’s coming home!” reverberating around a momentarily subdued Frog and Rosbif. 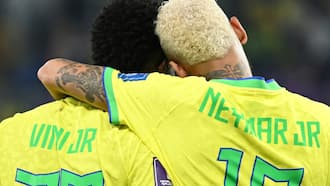 “We are controlling the game, putting in a good effort. Against Italy, we were defending as soon as we had one goal. Here we are actually going for it,” enthused England fan Joey Nguyen-Thomas, a 32-year-old advertising worker in Paris.

Victor Vion, a 43-year-old Frenchman who has lived in London for seven years, said before the game that he was “extremely stressed. France versus England is a match like no other, there’s an extra rivalry”.

Etienne Anthony, beaming with French colours painted on his cheeks, told AFP in Paris he was “excited at the idea of beating the English”.

“There’s a good-natured rivalry between us. We don’t hate them, but we really like to beat them.”