The Met Office has warned up to four inches of snow could fall in the southeast of England this weekend as the Troll of Trondheim continues to batter the UK with freezing temperatures.

Snow could hit London on Sunday as ice cold temperatures plummet to -10C, the Met Office says – as snow already began falling in Manchester in the early hours of Saturday.

The UK will see at least seven days of arctic weather accompanied by wintry downpours and ‘freezing fog’ which could affect morning commutes.

The UK Health Security Agency (UKHSA) sent out a Level 3 cold weather alert covering England until Monday and the Met Office issued several yellow weather warnings for snow and ice in parts of the country over the coming days.

What is a level 3 cold weather alert?

The Met Office has triggered a level 3, or amber, cold weather alert warning of severe conditions in England from 6pm tomorrow to 9am on Monday December 12.

The alert means the cold weather could increase health risks to vulnerable people and it requires social and healthcare services to take action to protect high-risk groups.

The Met Office said air from the Arctic will spread south across the country from late tomorrow evening with very cold nights expected as well as frosts.

The health body advises vulnerable people to heat their homes to at least 18C, wear extra layers of clothing, and eat hot food to protect themselves.

The Met Office has issued a yellow snow and ice warning for southern and eastern England from 9am on Sunday to 9am on Monday, warning of widespread disruption with a ‘slight chance’ that rural communities could be cut off.

The warning, which lasts for 24 hours, says two to five centimetres of snow could fall quite widely and up to 10cm (four inches) in places – including London, Ipswich and Brighton.

The Met Office has also extended a yellow weather warning for snow and ice in northern Scotland until 12pm on Sunday.

There is also a risk of travel disruption on Monday morning.

In the early hours of Saturday heavy snow was pictured in Manchester. Snow has already fallen across parts of Scotland, north Wales and northern England this week, with a short burst at Gatwick airport on Friday morning.

Passengers at Gatwick shared photos and images of the snow online, while others said their flights were delayed by ‘hours’ due to ice on the plane and runway.

Temperatures had plummeted late on Thursday to as low as minus 9C in the village of Benson in South Oxfordshire.

Meanwhile Britain’s councils are short of gritter drivers – just as roads are icing up as a result of an Arctic weather system known as the ‘Troll of Trondheim’.

More than nine in ten councils have the same stockpiles of rock salt as last winter, according to the Local Government Association. 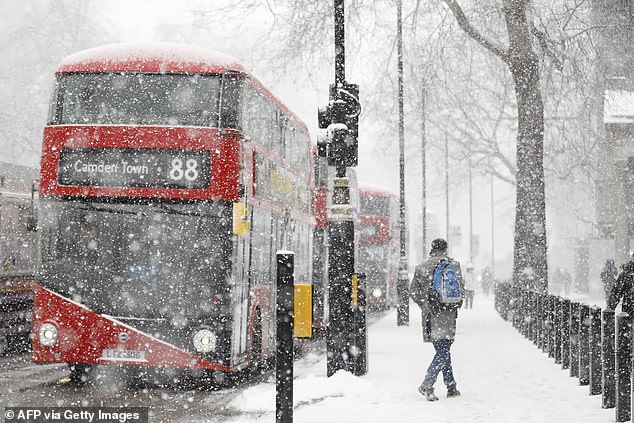 London could see as much as four inches of snow from Sunday morning into Monday, the Met Office forecasts (Pictured: Snow in London in 2018) 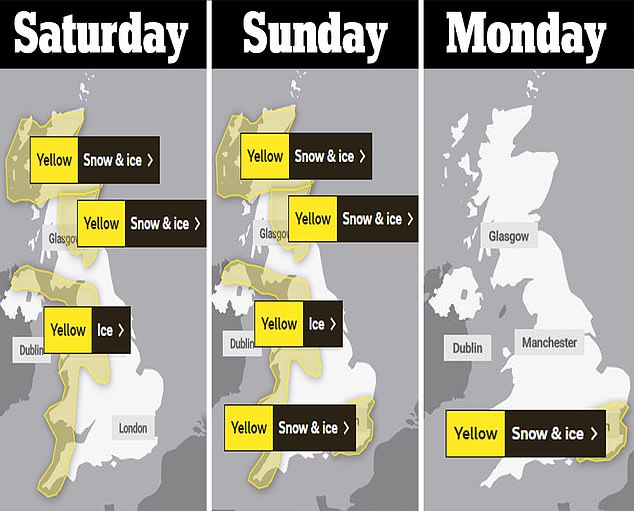 Met Office weather warnings are in place until Monday morning 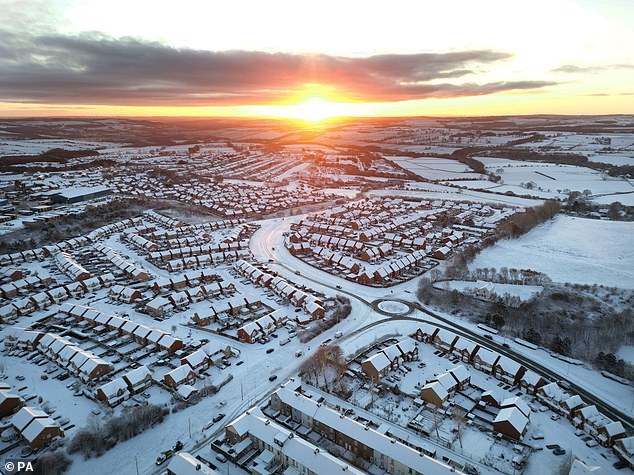 But its survey of 38 councils found there is a severe lack of HGV drivers – with 63 per cent saying they were having problems recruiting and retaining crew. Councils are turning to agency workers instead.

Steve Willington, the Met Office’s chief meteorologist, said: ‘It is staying cold, with daytime temperatures remaining only a few degrees above freezing in many places over the coming days and overnight temperatures dropping to -10°C (14F) or lower in isolated spots. Although below average, these temperatures are not that unusual for this time of year.’

He warned of the risk of freezing fog in places such as southern England, especially on Sunday and Monday mornings.

And a band of sleet or snow could move into the far South East on Sunday.

Met Office spokesman Grahame Madge added: ‘The outlook for the UK remains cold at least for the next seven days, with the potential for this to continue even longer.

‘At the moment the air mass which is feeding the cold conditions is coming from a northerly direction, even with an Arctic influence.

‘However, this air mass is also relatively drier so most of the precipitation is in the form of showers rather than continuous like you would get with a weather front. This has the benefit of bringing quite clear and bright conditions by day for many.

‘Along with the cold air there are a number of weather-related hazards including freezing fog, especially for Sunday and Monday mornings in the south of England.

‘Overnight temperatures are likely to dip widely below zero with some more sheltered spots dropping to minus 10C.

‘Our forecasters are looking at the possibility of snow affecting the south east of England on Sunday night and into Monday morning. If this happens it could bring some disruption to Monday’s rush hour.’

The seven-day freezing temperatures mean those on the lowest incomes will be eligible for a £25 cold weather payment from government.

These are triggered when the average temperature has been or is forecast to be 0C or below over a period of seven consecutive days. 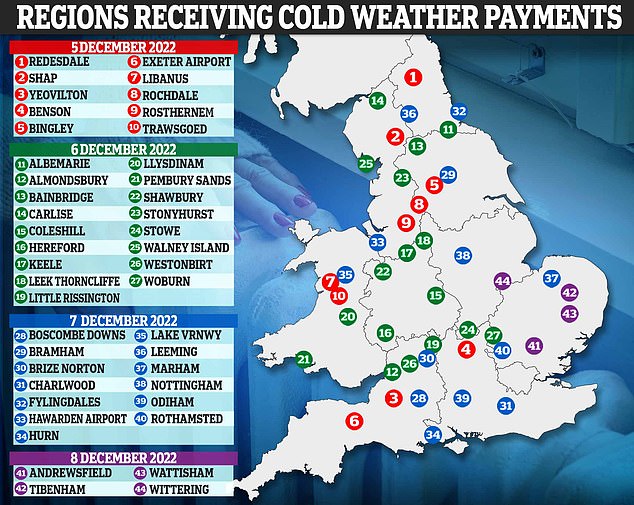 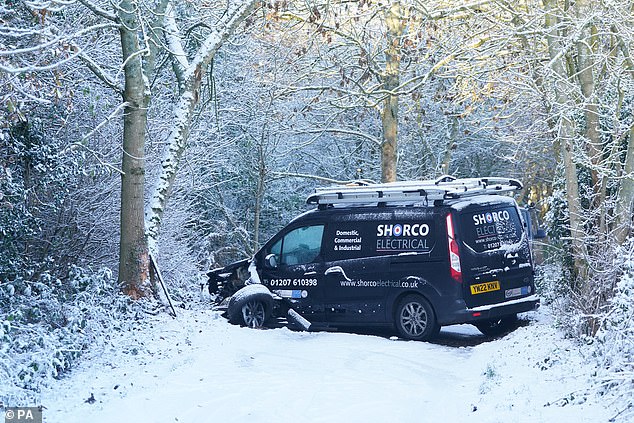 A van lost control and became stuck in snow in County Durham on Friday, ahead of further snow expected over the weekend 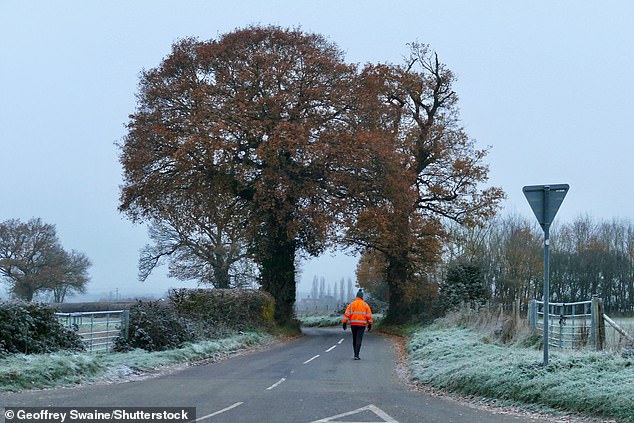 Temperatures are set to plunge to lows of -10C in England, with the possibility of even lower temperatures in Scotland 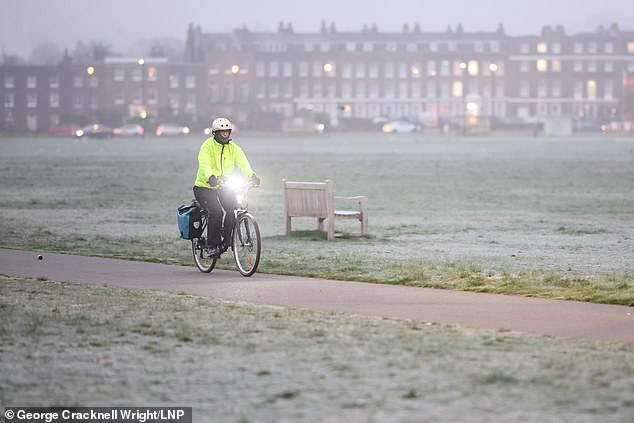 Commuters are being warned of possible disruption on Monday morning, especially in the southeast of England

Meanwhile, just over 3,200 warm banks, run by local authorities and charities to provide heating to those who can not afford to heat their homes, are open across the UK, according to the Warm Welcome Campaign.

It said many of them are a third or even half full and offer a variety of services, from hot tea to a place to work.

Charity Save the Children said 194 of 355 councils in England and Wales are directly involved in or supporting local groups to open warm spaces this winter.

Councillor Richard Wenham, Vice Chairman of the Local Government Association’s Resources Board, said: ‘Warm hubs and other similar schemes are among the many actions councils are taking to support people in the greatest need this winter, but these emergency schemes should not become the norm and are not a sustainable solution to bridge the gap between income and the current cost of living.’

In London, mayor Sadiq Khan agreed to implement emergency planning which includes sheltering homeless people in the capital against the severe weather.

All boroughs have committed to the Mayor’s ‘In for Good’ principle, meaning no one will be asked to leave accommodation until a support plan is in place to end their rough sleeping, regardless of an increase in temperature.

Latest figures show the number of people sleeping rough in London has jumped 24 per cent in the past year, with more than 3,600 sleeping on the capital’s streets between June and September. Rough sleeping services are also helping more people than ever before.

Mr Khan said: ‘Too many people are facing a freezing winter on the streets of the capital without the safe, secure accommodation they need.

‘Across the capital, we are doing everything we can to prevent anyone sleeping rough in these freezing conditions as we work to build a fairer and safer London for everyone.

‘I am also encouraging Londoners to download the Streetlink app or use the Streetlink website to connect people they see sleeping rough with local support services.

‘London’s councils and charities will be working even harder this week to support some of the most vulnerable people in our city.’

Elsewhere, RAC breakdown spokesman Rod Dennis said Thursday was an ‘exceptionally busy day for patrols’, with a quarter more breakdowns taking place across the UK than is ‘normal’ for the time of year.

He went on: ‘If anything, we’re expecting today to be even busier as many people – including students – use their cars to get away for the weekend, or take a day off to do their Christmas shopping.

‘It’s a picture that’s going to continue into the weekend and next week as the cold snap continues.

‘It’s vital that drivers make sure their cars are ready for the conditions to limit the risk of breaking down in the low temperatures, and this weekend is an ideal time to do check over their car’ tyres as well as oil, coolant and screenwash levels.

‘Anyone embarking on a longer journey should pack a winter kit they can use if the worst happens, which should include plenty of warm clothing layers for all passengers, a flask of warm drink, as well as food, water and a power-bank for keeping a mobile phone charged.’