By Harriet Line Deputy Political Editor For The Daily Mail

He  is hoping to reach out his hand for the keys to No 10 at the next election.

But for the time being Sir Keir Starmer is happy to hold hands with wife Victoria, as she looks into his eyes lovingly on the Labour leader’s official Christmas card.

Sir Keir, 60, and Victoria, who wed in 2007, are pictured walking on Hampstead Heath in his north London constituency. Inside, the card says ‘Merry Christmas and Happy New Year’ and is signed by Sir Keir. 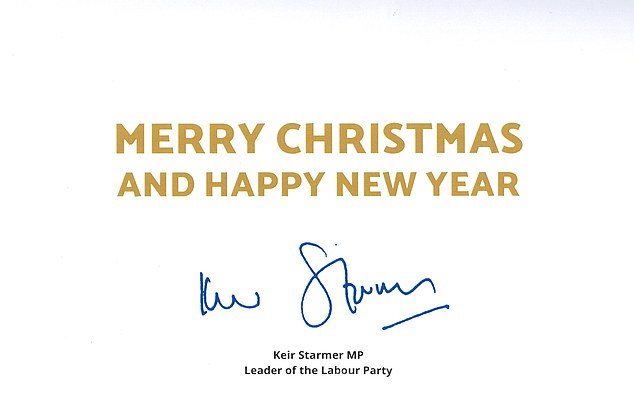 Inside, the card says ‘Merry Christmas and Happy New Year’ and is signed by Sir Keir

The Labour chief has two children with Victoria, an occupational health worker who tends to keep a low profile. Former party leader Jeremy Corbyn often used designs drawn by children on his cards.

But Sir Keir may have taken inspiration from the last Labour leader to win a general election, Sir Tony Blair, whose cards tended to feature a photo of him and wife Cherie.

The Starmers’ 2020 Christmas card featured a photo of the couple clapping for NHS staff outside their home during the pandemic.