“We’re going to continue to be part of the Western degree and part of the affiliation with Western,” Barry Craig, Huron’s president, said Wednesday.

The 1,300-student Western affiliate college, which specializes in undergraduate arts and social science programs, started the process to become more autonomous from Western a couple of years ago.

Initially, the decision to seek autonomy was prompted by a sense Western’s priorities didn’t necessarily align with those of Huron, Craig said.

“In recent years, we had gotten the sense that perhaps our relationship wasn’t as healthy as it could be,” he said. “We have a responsibility at Huron for our own institution; we recruit and educate our own students . . . so we had a sense that, perhaps, greater autonomy would strengthen our institution.”

But conversations between the two schools resulted in a new understanding of the relationship between both institutions, said Craig, who credited Western’s president Alan Shepard with leading the charge to keep Huron affiliated with Western.

“Alan came up with the idea that maybe there was a third way rather than status quo or rather than separating all together,” Craig said. “A way that we could just strengthen the relationship and stay affiliated with Western, but be more equal partners. I think that’s a better way to say it.”

The decision to remain affiliated with Western means Huron graduates will continue to receive diplomas from Western, as do students from the other two affiliated colleges, King’s University College and Brescia College. 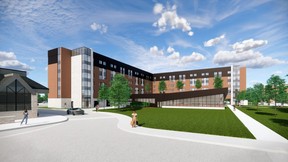 Huron held a ground-breaking ceremony Wednesday for a new residence with more than 300 rooms, lounges, a dining area and classrooms. The building that will include a green roof and energy-efficient equipment is expected to be completed in fall 2024, the university said.

Huron College was funded by Anglican clergymen in 1863, predating Western by about 14 years.

The school, which at one point was also home to a seminary, has been at its Western Road location since 1951.