At least nine children have now died with a Strep A infection across the UK, with health officials also reporting a surge in scarlet fever cases.

Typically, Strep A infections are mild and treated easily with antibiotics but an invasive form of the bacteria, known as iGAS, has increased this year, particularly in those under the age of 10.

A five-year-old child in Belfast is the latest child to die with the infection, with deaths also reported in Hampshire, London, Buckinghamshire, Surrey and Penarth in Wales.

Meanwhile, the huge rise in scarlet fever infections saw 851 cases reported in the week November 14 to 20, compared to an average of 186 for the same timeframe in previous years, according to the UK Health Security Agency (UKHSA).

Click or search in the map below to find out the number of scarlet fever cases in your area, according to the latest publicly available statistics.

Scarlet fever – an infection caused by Strep A – mostly affects young children and can be easily treated with antibiotics.

Symptoms include a sore throat, headache, fever, and a “sandpapery-feeling” pinkish or red body rash.

A total of 861 cases were recorded in England and Wales up to 27 November, according to data released by the UKHSA.

They included 101 cases in Wales, with 14 recorded in Bridgend and 11 in Cardiff.

In England, the North West recorded the highest number of cases with 137, including 32 in Merseyside, 27 in Lancashire and 27 in Greater Manchester.

A total of 134 cases were recorded in the South East and 128 in the East of England.

Elsewhere, there were:
• 124 cases in the East Midlands
• 103 cases in London
• 46 cases in Yorkshire and the Humber
• 48 cases in the West Midlands
• Five cases in South West – with no recorded cases in Dorset and just one each in Somerset and Devon

The figures also show there were 9,772 recorded cases of scarlet fever in England and Wales in the last 20 weeks up to 27 November.

This is compared to 1,255 cases in the same period in 2021 and just 530 in 2022, although both years would have been affected by the pandemic, when children were mixing less.

Read more:
What is Strep A and what are the symptoms?
Strep A generally causes mild infections – why the spate of deaths now?

Areas with invasive Strep A disease

iGAS – or invasive Group A Strep – can be a life-threatening infection in which the bacteria have invaded parts of the body, such as the blood, deep muscle or lungs.

There were eight confirmed cases in England and Wales in the week up to 27 November, according to data released by UKHSA. 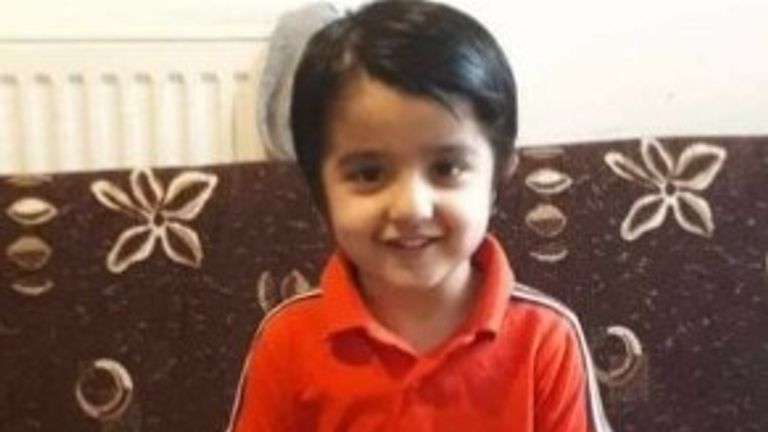 Image:
Muhammad Ibrahim Ali died with a Strep A infection

They were in Croydon, south London; Ealing, west London; Knowsley in Merseyside; North Somerset; Oldham in Greater Manchester; Redcar and Cleveland; Rushmoor in Hampshire; and the Vale of Glamorgan.

Before the death of a child in Belfast was confirmed, it was revealed a primary school pupil in Waterlooville, Hampshire, had died with a Strep A infection.

Other known victims include a year eight student at a secondary school in southeast London; four-year-old Muhammad Ibrahim Ali in High Wycombe, Buckinghamshire; and a child in Ealing, west London.

A pupil at a primary school near Cardiff, has also died from the infection, as well as a six-year-old child who died after an outbreak at Ashford Church of England School in Surrey.

Meanwhile, four-year-old Camila Rose Burns has been on a ventilator in Alder Hey Children’s Hospital in Liverpool after contracting Strep A.