Pioneering conservationist John Muir was born in Dunbar on the east coast of Scotland in 1838, and his birthplace is now a museum. He moved to the US when he was 11 and went on to create the Sierra Club organisation, which still protects Yosemite and other national parks. “When I was a boy in Scotland, I was fond of all things wild …” he wrote. “Around my native town of Dunbar by the stormy North Sea, there was no lack of wildness, though most of the land lay in smooth cultivation.”

In the John Muir country park near Dunbar, 30 miles east of Edinburgh, there’s a smell of stranded seaweed and crushed pine needles, the insistent peeping of oystercatchers and the rising whistles of mud-probing curlews. A bracken-bordered path, with straggles of harebells and honeysuckle, runs beside the wide Tyne estuary (Scotland also has a River Tyne), through saltmarsh dotted with samphire and sea asters, and past smooth sandy beaches where wagtails hop over the rocks. It leads on along red cliffs towards what Muir called the “craggy ruins of the old Dunbar castle”.

This is the eastern end of the coast-to-coast John Muir Way, a long-distance path launched in 2014, 100 years after Muir died. Its 134-mile course stretches from Helensburgh in the west to Dunbar, and walking some or all of it makes for a great holiday. It’s affordable and sustainable, thanks to great public transport links that make it easy to head back to a cheap base each night. In summer 2021, the John Muir Way also launched a series of day walks and cycle rides.

Walking beside the Tyne’s estuary near Dunbar. Photograph: Phoebe Taplin

The need to protect the natural world in the face of climate crisis and ecological catastrophe, grows more urgent every year. Though many of us have never heard of him, Muir influenced today’s green movement and his ideas have never been more vital.

I was walking beside the Firth of Forth when I first saw a signpost for the John Muir Way; a few years later, I’m back in the pretty town of Linlithgow, about halfway along the route, for the start of a week’s gentle, eastward pilgrimage rich in wildlife and history.

Though many of us have never heard of him, Muir influenced today’s green movement

Stained glass casts rainbow-coloured patterns across the stone floor and pillars of Saint Michael’s church in Linlithgow. Over the road, in the town museum (free), there’s a typewriter that belonged to former local MP Tam Dalyell and musket balls that were found near lochside Linlithgow Palace, birthplace of Mary, Queen of Scots. The John Muir Way leads north from the far end of town to the shore of the Firth of Forth, past remnants of the Roman Antonine Wall, a slightly younger, turf-built version of Hadrian’s more famous frontier. 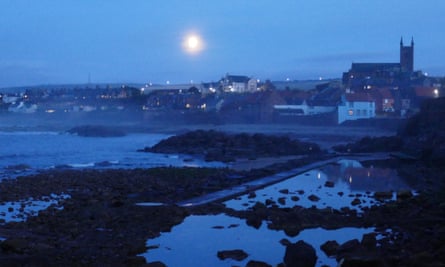 With the glinting water on my left, I eventually shake off the industrial fringes of Bo’ness and walk a total of 10 miles, past silver birches and sea tangle tide marks, to towering Blackness Castle. Bus 49 runs four times each weekday back to Linlithgow, where I’m staying the night. Edinburgh is less than 20 minutes away by train.Through waterside woods next morning, I reach the Hopetoun estate (reopens 7 April 2023), where sheep and deer graze under the oaks. It’s almost a shock to climb the lane and catch sight of a flashing tower on the 2017 Queensferry Crossing, newest of the Forth Bridges. I detour up the long drive of Hopetoun House to eat courgette-and-ginger cake in an old stables, and wander past tapestries, portraits and a magnificent domed central stairway. 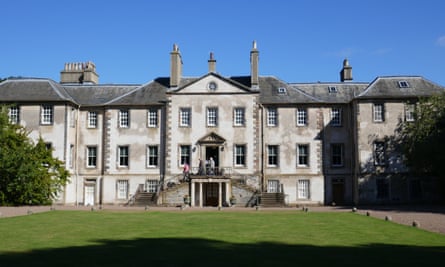 The John Muir Way heads on through Queensferry, past the bridges, and finds green routes through Edinburgh: along the wooded Water of Leith, the Union Canal, and the spire-ringed Meadows to emerge in Southside, where a queue is forming outside Bits Bake Shop. I’ve stayed two nights in Edinburgh, covering about 10 miles a day, which leaves time to explore. I buy coffee and a cardamom-pistachio roll to eat at the foot of Salisbury Crags, which are already looming at the end of the road. Climbing is optional on the JMW – you can easily detour up the crags and Arthur’s Seat. The official route, however, follows the former, horse-drawn Innocent Railway, a cycle path that skirts Edinburgh’s volcanic hills past Scotland’s first railway tunnel. 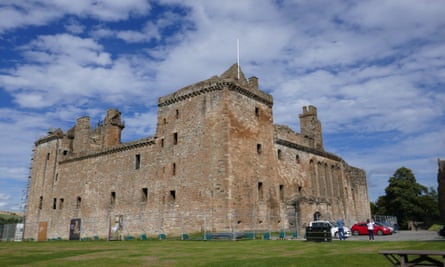 Duddingston Loch, which I’ve only ever seen from the top of Arthur’s Seat, stays stubbornly out of sight behind a high wall. A sign says “Craigmillar Castle ½ mile”, but I press on along a streamside path to reach Newhailes, another Palladian mansion, where I’m booked on an afternoon tour. The short detour to Newhailes passes a ruined summerhouse, cascades and a grotto, once part of the elegant, 18th-century water gardens, built to impress guests. The old curling pool (which used to freeze over in winter) has dried up, and the crumbling main house is a Havishamesque pile, full of golden shell motifs, flowery wreaths of baroque stucco work, distant sea views and rich melancholy.

I’m staying the last three nights in Dunbar’s Dolphin Inn (doubles from £55). Dunbar is easy to access by train from Musselburgh near Newhailes and North Berwick, where I end next day, beyond the wooded grounds of Gosford House and the long sands of Aberlady Bay. (Regular buses allow you to skip one or two roadside miles and leave more time to wander on the beach.) The Dolphin is a fresh, friendly hostel, spotlessly clean, with vintage touches, cheerful murals and a help-yourself continental breakfast. At Hector’s artisan pizzeria, just down the road, the toppings include smoky Sgaia vegan charcuterie from Glasgow and strong, creamy cheeses from Doddington dairy, over the border in Northumberland. 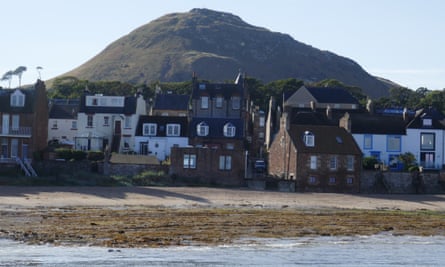 On my last morning I catch bus 120 past Tantallon Castle to North Berwick and start at the Scottish Seabird Centre. Scotland has over 10,000 miles of coastline, more than 60% of the UK’s total, and 45% of all Europe’s breeding seabirds live or visit here, including puffins, guillemots, kittiwakes and cormorants. Despite being hit by avian flu this year, Bass Rock still hosts the world’s largest colony of northern gannets, and the Latin and French words for gannet both derive from the name of this rocky island off the East Lothian coast.

Several hours later, having followed the John Muir Way past a red-roofed watermill near the village of East Linton, and the strange Bridge to Nowhere in Belhaven Bay, I’m finally strolling the clifftop path back towards Dunbar. I watch huge white gannets plummet beak-first into the sun-burnished waves and herons standing guard over the harbour. Edinburgh is half an hour away by train and I’m heading home to Essex via the night train to London. So there’s plenty of time to pop into the Volunteer Arms for a last pint of Belhaven best, a malty beer from Scotland’s oldest working brewery, down the road. 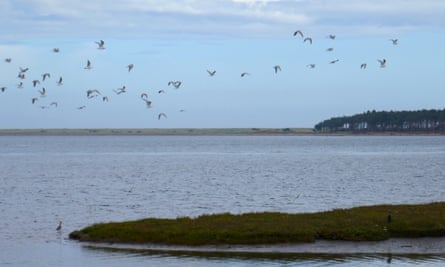 On new Caledonian Sleeper trains launched in 2019, you can leave London late at night and be in Edinburgh for breakfast. Travelling overnight means you can avoid flying, but don’t have to give up daytime hours to travel.

I fall asleep as the rocking train hurtles southwards. John Muir left Dunbar by train in 1849, heading for the US, when the railways were new. By the time he revisited Scotland, nearly half a century later, the east coast line had opened the area to visitors. But he wrote in a letter that the evening waves, breaking on the rocky shore where Muir had played as a boy, still sang “the same old songs they sang to me in my childhood”.