By David Barrett For The Daily Mail

Alleged members of a Bolivian smuggling gang were arrested yesterday accused of exploiting the free movement zone between the UK and Ireland.

The three held in south London are suspected of bringing migrants from Bolivia via Dublin and Belfast to mainland Britain.

The criminal operation is suspected of manipulating the so-called Common Travel Area which allows passport-free movement between the UK and Ireland.

A Home Office spokesman said the arrests were ‘linked to a highly sophisticated people-smuggling operation between Bolivia and the UK’.

‘The individuals are believed to have been abusing the Common Travel Area between Dublin and Belfast, charging migrants thousands of pounds to be flown from Bolivia to the UK via the Republic of Ireland,’ she added. 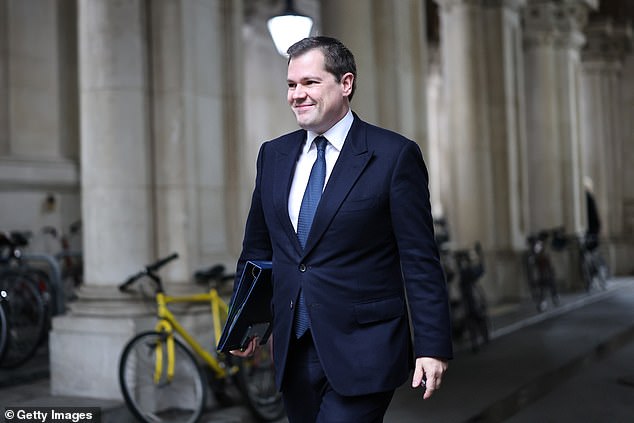 Commenting on the arrest, immigration minister Robert Jenrick said: ‘The public should be in no doubt of our determination to clamp down on those who violate our laws by exploiting people for their own financial gains’

‘Once smuggled into the country, most of the migrants are believed to have been working here illegally.’

Immigration minister Robert Jenrick said: ‘The public should be in no doubt of our determination to clamp down on those who violate our laws by exploiting people for their own financial gains.

‘These individuals thought they were beyond the reach of the law – they were proved wrong.

‘Today’s operation sends a clear message to people smugglers and those thinking about abusing our immigration laws: you will be caught and brought to justice swiftly.’

Two men aged 38 and 41 and a 35-year-old woman were arrested by the Home Office’s Immigration Enforcement agency at two addresses in Camberwell and Peckham, south London, on suspicion of conspiracy to assist unlawful immigration.

Two further individuals, a male and female, were found at the Peckham property and identified as illegal migrants from Bolivia.

They will be processed by Home Office immigration officials, the spokesman said.

Around £1,500 in cash and two false identity documents were also discovered at the same address.

The suspects will be flown to Belfast for questioning.